EKOS has its weekly poll out, and the only thing remarkable about it is how weak all of the parties are. 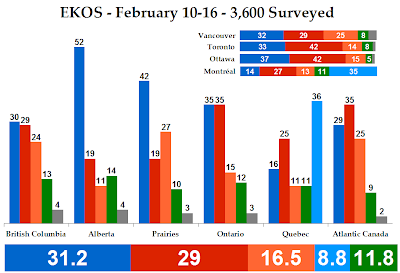 Those are pretty low levels for all the four major parties, though 16.5% is higher than usual for the NDP in an EKOS poll.

British Columbia illustrates just how close the race is becoming. The Conservatives have dipped below the 30% mark, and are at 29.9%. The Liberals are up five points to 29% and the NDP is down three to 24%.

Nothing remarkable in the three smaller regions, but the Conservatives are not polling well in Alberta and the Prairies. The NDP posts a nine-point gain in the Prairies.

As you can see, I've added the results of Vancouver, Toronto, Ottawa, and Montreal to the chart above. No surprises in that chart, really, but it will be interesting to watch how those numbers move.

With this poll, the Conservatives would still take the most seats, with 124. More than half, or 65 seats, comes from the West. The party also takes 45 in Ontario, six in Quebec, and eight in Atlantic Canada.

The Liberals increase the size of their caucus by about half, taking 19 seats out West, 48 in Ontario, 17 in Quebec, and 19 in Atlantic Canada.

The NDP take a few losses, with 11 seats out West, 13 in Ontario, two in Quebec, and five in Atlantic Canada.

The Bloc increases its caucus to 50 seats, thanks to the weak Conservative results in the province.

Things are pretty steady, is about all that can be said. The main fight seems to be in Ontario and British Columbia - but for some reason in that latter province it is only about the Tories dropping.
Posted by Éric at 9:17:00 AM