Two Ships Passing in the Night

Since the beginning of December 2009, the two major parties in Canada have seen a shift in the polls. The Conservatives have dropped from a ten-point lead to a tie, from 36% to about 31%. The Liberals have risen from around 26% to 31%. With such a drastic change, I thought it would be interesting to look at how the voting intentions have changed within demographic groups.

The following analysis is based on the EKOS polling done between November 25 and January 26. I've used EKOS as they have been the most frequently reporting pollster and always have a demographic breakdown. They also have the advantage of large sample sizes.

First, let's take a look at male and female voters. 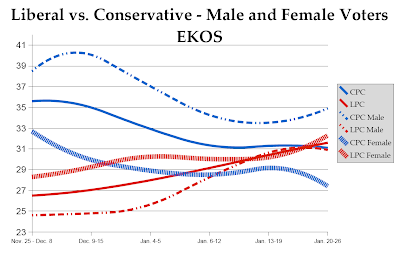 The solid line in this chart shows the two parties as they meet in a tie. The lines with dashes show the voting intentions of male and female voters.

It is plainly obvious that Conservative voters aren't evenly spread between the two genders. The gap between Conservative male and female voters is usually about six percentage points. You can see that the two genders have more or less run in parallel, with a slight divergence lately. Female voters seem to be turning away from the Conservatives, but this loss is being made up for by male voters.

Liberal supporters are more evenly divided between the two groups. Female voters have tended to be more Liberal than their male counterparts. The gap between the two, however, has not usually been more than four points. What is interesting is that the Liberals have recently made big gains among male voters. Female voters have stuck with the party in almost equal numbers throughout this time period. In fact, since mid-January, the Liberals can claim that their supporters have been divided almost completely equally between male and female. The gap between the two gender groups has been almost non-existent over the last two polls.

If we compare voting intentions within each gender, we see that the gap between Conservative and Liberal male voters was huge in December and early January - about 10 to 15 points. But since mid-January the Liberals have closed the gap to about three or four points. Nevertheless, male voters support the Conservatives in greater numbers.

The race has been much closer with female voters, the gap being much smaller even in early December. But by mid-December the Liberals had tied with the Conservatives, and they haven't looked back since.

From a gender standpoint, the major shift has been among male voters and towards the Liberals. Female voters have been much less likely to change their voting intentions, but the trend does align with the national one.

Now, voters by age. I neglected the 18-25 age group since the sample size was smaller and the variation was huge. Also, they vote less. Slackers. 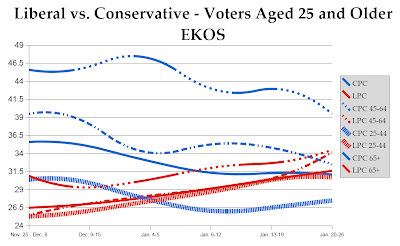 This chart is a bit more cluttered, so let me explain in detail (also, the 65+ line is not the solid line, but the solid line interspersed with dashes).

We'll start with the 25-44 year old Conservatives. They are the thickly-dashed line. As you can see, they support the Tories in numbers lower than the national average - about four or five points lower. But, their support has not varied greatly, or almost at all, from the national trend.

Meanwhile, 45-64 year old Conservatives have been very close to the national average, only about one to three points higher. They have also closely paralled the national trend, except for the January 4-5 poll result.

Finally, for the 65 and older group, it is clear that this is where the Conservatives find a large part of their support. The gap between the national average and these retired voters can be as great as 10 points. However, they also followed the national trend, for the most part.

Now, 25-44 year old Liberal voters. These are the thickly-dashed line. They have followed the national trend almost exactly, being at most one or two points lower than national support.

As for 45-64 year old Liberals, they follow the national trend so closely that they are obscured by it on the chart. So, 25-64 year old voters are trending in the same direction.

Finally, 65 and older voters. They have supported the Liberals in numbers slightly higher than the national average, about two to four points. But they have trended in the same direction as the others.

Comparing the voting habits within each age group, we find that 25-44 year-old voters have changed the most. They moved to the Liberals in early January. As for 45-64 year old voters, they used to vote Conservative. But starting in mid-January the gap narrowed, and in the last poll the Liberals were in the lead by a small amount. Finally, for 65+ voters, the gap has been huge, as much as 15 points. It has since narrowed, but retirees still vote Tory.

To sum up, the Liberals have made gains within all age groups. No one age-group can be given the credit for the change in Liberal fortunes. What can be said, however, is that younger and middle-aged voters are moving to the Liberals from the Conservatives.

Conservative strength can be found among male and older voters. Liberal strength is among female and younger voters. But the changes we've seen in voting intentions since November and December have been across the board. That is good news for the Liberals, and bad news for the Conservatives.
Posted by Éric at 9:47:00 AM