A little late, but it's time to check in on October's best and worst case scenarios for each of the three national parties. Here's the standard explanation:

In other words, these projections are the best and worst possible results each party could've gotten had an election taken place last month, based on the available polling data.

These best and worst case scenarios are in terms of total seats.

As usual, we shall start with the New Democrats. Their best case scenario is an improvement of one seat from September, and would result in 43 NDP MPs being elected, compared to 55 Bloc members, 82 Liberals, and 130 Conservatives. This would be achieved with 20.9% national support, while the Liberals would have 27.2% and the Conservatives 33.5%. The NDP would win 16 seats in British Columbia, one in Alberta, four in the Prairies, 15 in Ontario, one in Quebec, and six in Atlantic Canada. 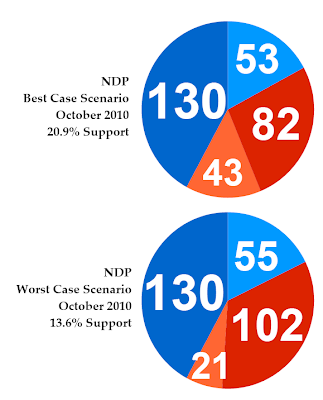 Their worst case scenario is much better than it was in September. The party's floor in October was 21 seats, seven more than last month. The Conservatives would, again, win 130 seats in this scenario, with the Liberals taking 102 and the Bloc 55. NDP support would drop to 13.6%, while the Liberals would take 29.7% of the vote and the Conservatives 33.9%.

In this scenario, the NDP would win 10 seats in British Columbia (still not bad), none in Alberta, two in the Prairies, seven in Ontario, one in Quebec, and one in Atlantic Canada.

Now, the Liberals. Their best case scenario would actually put them at a greater disadvantage than the Conservative worst case scenario, as you will see below, but gives them more seats.

With 31.1% of the vote, the Liberals would win 108 seats. That is 21 fewer than September's best case scenario. The Conservatives would win 126 seats and 33.3%, while the NDP would win 25 seats and 14.4%. The Liberals would win 11 seats in British Columbia, one in Alberta, six in the Prairies, 49 in Ontario, 17 in Quebec, and 22 in Atlantic Canada. It would keep them on the opposition benches, however, or force them into a coaltion with the NDP. 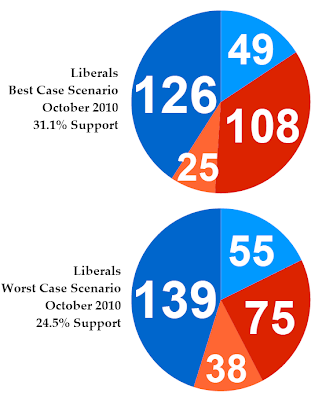 With 24.5% of the vote, their worst case scenario would be 75 seats, two fewer than September. The Conservatives would win 139 seats and 37.2% while the NDP would take 18.1% and 38 seats. The Liberals would win six seats in British Columbia, none in Alberta, one in the Prairies, 34 in Ontario, 15 in Quebec, and 17 in Atlantic Canada.

Finally, the Conservatives. Their best case scenario puts them out of the majority territory they were in a month ago. With 37.6% of the vote, they would win 147 seats, 11 fewer than September. The Liberals would win 80 seats and 26.9% of the vote, while the NDP would take 32 seats and 16.8%. The Conservatives would win 17 seats in British Columbia, 28 in Alberta, 24 in the Prairies, 57 in Ontario, eight in Quebec, and 12 in Atlantic Canada. 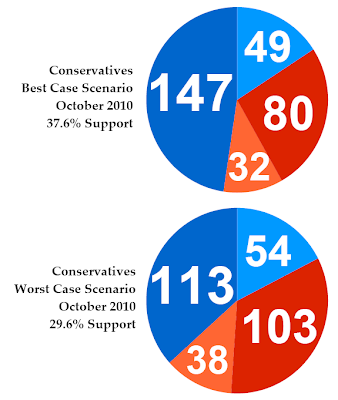 Their worst case scenario would still see them with the most seats in the house: 113, with 29.6% of the vote. That is 13 more seats than in September. The Liberals would win 103 seats and 28.6%, while the NDP would take 38 seats and 18.3% of the vote. The Conservatives would win 14 seats in British Columbia, 26 in Alberta, 19 in the Prairies, 43 in Ontario, three in Quebec, and seven in Atlantic Canada.

From this exercise, we can say that the Liberals did not have a very good month in October. While they were capable of winning a minority in September, they've moved away from that now. The NDP has reduced its risk for a calamitous electoral result, while the Conservatives have increased their chances of winning the next election. However, they have also put themselves out of contention for a majority government.
Posted by Éric at 11:07:00 AM

Projections on this site are subject to the margins of error of the opinion polls included in the model, as well as the unpredictable nature of politics at the riding level.
The degree of uncertainty in the projections is also reflected by the projections' high and low ranges, when noted.