On Saturday, Angus-Reid released the details of a huge poll of 6,482 members of their online panel. This gave them the ability to delve into and report the voting intentions of every province, including Saskatchewan and Manitoba and the four Atlantic provinces. It's all great fun, and in the end Angus-Reid shows that the Conservatives have made a gain since their last poll in early January. 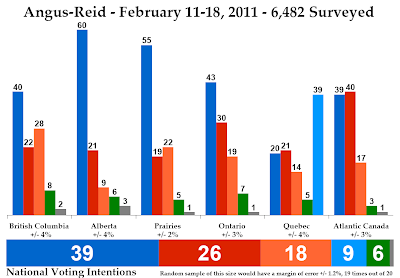 Compared to that poll, the Conservatives have gained five points and now lead with 39%. The Liberals are down two points to 26%, while the New Democrats are up one to 18%.

In any case, the only statistically significant variation at the national level, assuming a random sample, goes to the Conservatives and the Greens. The others are probably statistical wobbles.

The Conservatives are leading among both men and women, though the margin is far smaller among the fairer sex. Among men, the Conservatives have 44% support, compared to 24% for the Liberals and 15% for the NDP. Among women, the spread is 34%-28%-21%.

In Ontario, the Conservatives are up five points to 43%, as the Liberals drop six points to 30%. The New Democrats are up three points to 19%, while the Greens are down three to 7%.

The Bloc Québécois has dropped four points to 39% in Quebec, while the Liberals are down one to 21%. The Conservatives have gained seven points, and now stand at third with 20%. The NDP is down one to 14%.

The Conservatives have dropped five points in Alberta, but still lead with 60%. The Liberals are up 10 points to 21%, while the NDP is down three to 9%.

I'll delve into the sub-regional numbers in a bit, but regionally the Liberals are leading in Atlantic Canada with 40%, down nine points. The Conservatives are up 16 points to 39%, while the NDP is up seven to 17%. Note that in Angus-Reid's last poll the "Others" were at 16%. They are now at 1%. This accounts for most of the shift.

It would appear that the only variations of real statistical significance are the gains by the Conservatives in Quebec and by the Liberals in Alberta.

Now, to the sub-regional results. As we are very rarely treated with these numbers, I'll compare them to the 2008 election results. 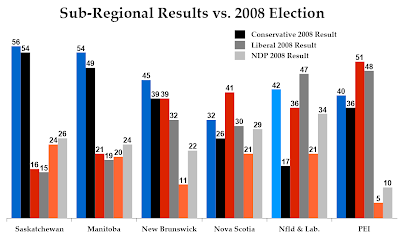 In Manitoba, there has been a little change. The Conservatives are up five points to 54% and the Liberals are up two to 21%, while the NDP has dropped four to 20%. It puts the Winnipeg North by-election win in November in some context.

New Brunswick has seen even more change. Perhaps unsurprisingly considering the Progressive Conservative win in September in the province, the Conservatives are up six points to 45%. But the Liberals are up even more, gaining seven points to stand at 39%. Oddly, the NDP has fallen precipitously, from 22% to only 11% in the province.

Meanwhile, in Nova Scotia there has also been a shift, with the Liberals picking up 11 points to lead with 41%. The Conservatives are up six to 32%, while the NDP is down eight to 21%.

In Newfoundland & Labrador, the recent Telelink poll seems to be confirmed. The Conservatives are up a big 25 points to 42%, with the Liberals dropping 11 points to 36% and the NDP dropped 13 points to 21%. 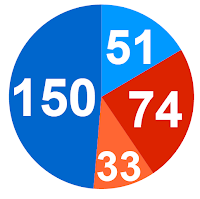 With the results of this poll only, the projection model gives the Conservatives 19 seats in British Columbia, 27 in Alberta, 22 in the Prairies, 62 in Ontario, nine in Quebec, and 10 in Atlantic Canada for a total of 150. That's a gain of 19 seats from Angus-Reid's last poll.

The Liberals win six seats in British Columbia, one in Alberta, two in the Prairies, 29 in Ontario, 14 in Quebec, and 20 in Atlantic Canada for a total of 74. That's a drop of 23.

The Bloc wins 51 seats in Quebec, down four.

And the New Democrats win 11 seats in British Columbia, none in Alberta, four in the Prairies, 15 in Ontario, one in Quebec, and two in Atlantic Canada for a total of 33, up eight.

For regular readers, note that the riding-level projection model is in place for British Columbia, Alberta, and the Prairies. Ontario is close to being completed.

Also, I will be using this poll as a model to properly distribute support in Atlantic Canada. While the Conservatives are up in each province, the bulk of their gain comes in Newfoundland & Labrador. This will need to be taken into account in the projection model.

This poll serves to confirm what the others showed as the situation in mid-February: a double-digit Tory lead. But the Atlantic Canada numbers tell us something that other polls cannot: the Liberals still have very good numbers in the Maritimes, while the Conservatives will be the front-runners in Newfoundland. That changes the game quite a bit, and paints a very different picture of the situation in Atlantic Canada than the one we expected before.
Posted by Éric at 12:23:00 PM