NDP up in BC, down in Quebec

On Friday, The National Post reported on a new Forum Research poll that looked at the federal voting intentions of Canadians. It also peeked at who Canadians think should be the next leader of the NDP.

Of course, yesterday was quite the day in NDP polling, as internal numbers from the Dewar and Mulcair campaigns were released. I'll go into more detail on them tomorrow when the endorsement rankings are updated, but in the meantime you can read my article about them at The Huffington Post Canada here. 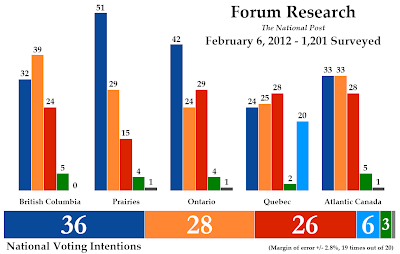 Forum was last in the field on January 13, and since then there has been very little change at the national level. The Conservatives are up one to 36%, the New Democrats are unchanged at 28%, and the Liberals are up one to 26%.

The Bloc Québécois is steady at 6% while the Greens are down one to 3%.

But there have been big shifts in Quebec and British Columbia. On the West Coast, the New Democrats have picked up seven points and now lead with 39%, well ahead of the Conservatives. And this despite them gaining two points to hit 32%. The Liberals have made the room, dropping six points to 24%.

Quebec is the most significant change, as the Liberals have moved into first place ahead of the NDP. They are up seven points to 28% while the New Democrats are down four points to 25%. The Conservatives are up two to 24% and the Bloc is down three to 20%.

Could it be? While Forum is the first and only polling firm to put the Liberals ahead of the NDP in Quebec, they are not the first to show an increase in Liberal strength in the province as well as a decrease in support for the NDP. 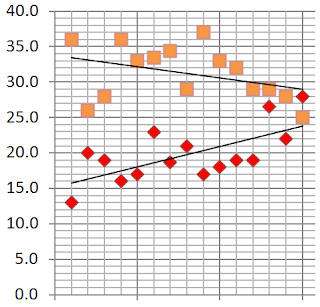 This chart shows results in Quebec for the Liberals and NDP since the beginning of December (not spaced out correctly for time, but you get the idea). While the results are somewhat of a scatter shot, an uptick in Liberal support coupled with a slip in NDP support has become apparent.

This is somewhat surprising, though not because the New Democrats may have slipped into second. They have been on a downward trajectory since October-November. What is surprising is that the Liberals, the party of the sponsorship scandal, may have moved into first. Many had suspected that Quebec was lost to the Liberals and would be for a very long time. Perhaps a rebound of the Bloc Québécois is not inevitable, and in the absence of a consensus alternative to the unpopular Conservatives it is the Liberals that will benefit.

The rest of the poll shows pretty standard fare, the Conservatives well ahead in the Prairies (including Alberta) and a three-way race in Atlantic Canada. 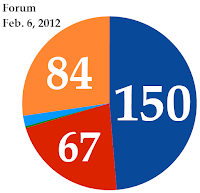 The Conservatives win 150 seats with the results of this poll. The New Democrats win 84 and the Liberals take 67, which is quite problematic for them. With a total of 151 seats, the NDP and Liberals are not in a position to form a majority coalition government. For one, the Conservatives are too high in Ontario, but the NDP and Liberals are also shooting each other in the foot by running so close together as the alternative option.

The Conservatives win 13 seats in British Columbia, 26 in Alberta, 16 in the Prairies, 64 in Ontario, 16 in Quebec, 14 in Atlantic Canada, and one in the north.

The New Democrats win 16 seats in British Columbia, two in Alberta, nine in the Prairies, 22 in Ontario, 28 in Quebec, six in Atlantic Canada, and one in the north.

The Liberals win six seats in British Columbia, three in the Prairies, 20 in Ontario, 25 in Quebec, 12 in Atlantic Canada, and one in the north.

The Bloc Québécois wins six seats in Quebec and the Greens win one in British Columbia. 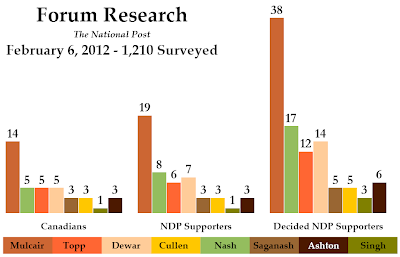 Now to the NDP leadership race, which Forum has been polling for some time. Their findings have been waved off as irrelevant since they are polling all Canadians or NDP supporters (as if their opinions are irrelevant!), but surprisingly the most recent figures from Forum actually line-up generally well with the recent internal polling from the campaigns of Paul Dewar and Thomas Mulcair. Aside from a slight under-estimation of Nathan Cullen's support and an over-estimation of Thomas Mulcair's, Forum's polling of NDP supporters is actually not too far off what polls of NDP members have indicated.

In this survey, Mulcair leads the pack among decided NDP supporters with 38%, followed by Peggy Nash at 17%, Paul Dewar at 14%, and Brian Topp at 12%. If we take out the undecideds, Mulcair has the support of 19% to 8% for Nash, 7% for Dewar, and 6% for Topp. Canadians generally share that opinion, though there is a tie among the three that appear to have been identified as running in a close race for second in Dewar's and Mulcair's polling.

Since Forum has begun tracking these numbers, there has been very little change. Mulcair was at 19% among all NDP supporters in early January as well, while the others have been going up or down a tick over the past few months without any clear trend. It would appear that NDP supporters are most apt to prefer Mulcair but aside from that no other candidate is building up a head of steam, at least in the opinion of the general public. But it is interesting to see that their opinion is not so out of step with that of the NDP's membership, at least at this stage of the game.
Posted by Éric at 9:27:00 AM