The year is almost over and the world has not ended just yet. So, what better time to compare the performances of the federal parties in the polls over 2012 to where they stood in 2011 after the election?

I wrote more generally about each party's report card for 2012 at The Huffington Post Canada here. Please check it out.

For this comparison of 2011 to 2012, I did a simple average of every poll that was conducted in each year. For 2011, I only looked at polls taken after the May 2 election. This gives us a very large sample of polls to draw from, and gives us a good picture of where the parties actually won or lost support in 2012. As the years roll on, it will be fascinating to take a look at how 2011 and 2012 compare to 2013, 2014, and beyond. 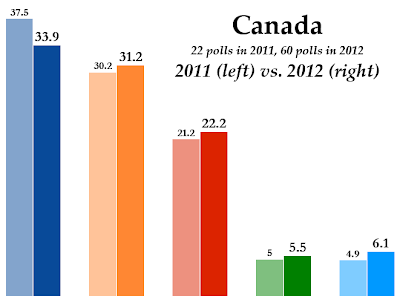 Nevertheless, this does show that 2012 has been a bit of a rougher year for the Conservatives. At almost 38%, the party could hope for the kind of ballot-box boost that would give them another majority. At 34%, they would be virtually assured of a minority government.

Considering the surprise breakthrough of 2011, it is perhaps a very good sign for the NDP that they have managed to hold on to their support. While the Liberals might have hoped that 2011 was just a fluke, they can console themselves that they didn't collapse after the debacle of the last election. 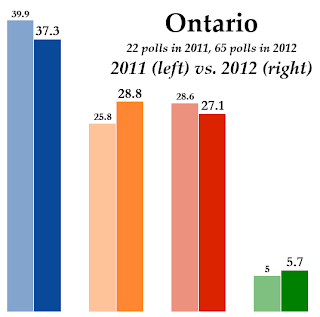 The New Democrats took full advantage, increasing their support by three points to 28.8% from 25.8%, putting them in second place in the province in 2012. 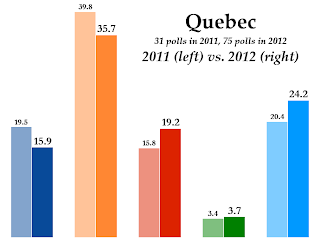 However, the New Democrats fell sharply in Quebec. The party had maintained most of its support in 2011, with an average of 39.8%, but that slipped by more than four points to 35.7% in 2012. 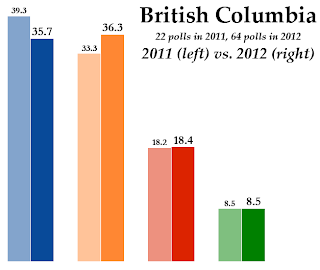 The New Democrats moved ahead with a three-point gain, putting them at 36.3%. The Liberals and Greens held steady, at 18.4% and 8.5% apiece. 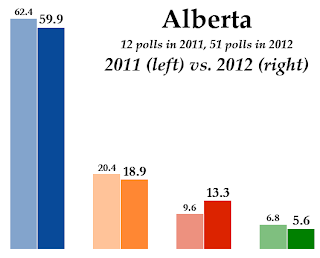 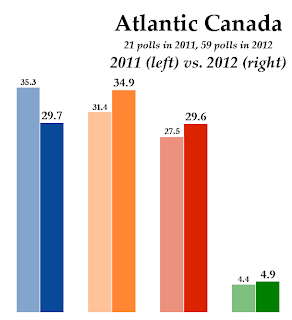 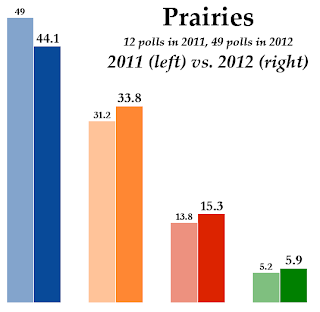 Altogether, 2012 has to be considered a bad year for the Conservative Party. In addition to shedding 3.6 points of support nationwide (or almost 1 out of 10 supporters from their 2011 average), the Conservatives dropped in every region. Some decreases were relatively modest or inconsequential, such as in Alberta and, to a lesser extent, Ontario. But other drops were quite large and would result in the loss of many seats - particularly in British Columbia, Atlantic Canada, and potentially the Prairies.

The four other parties had good years, relatively speaking. The Greens did make a gain of 0.5 points in 2012 and were up in four of the six regions. But they were stagnant in British Columbia and down in Alberta, and their gains in the rest of the country were minimal.

The Bloc Québécois rebounded from a dismal 2011, but at 24.2% support in Quebec in 2012 they are still very close to their disastrous result of the May 2011 election. They are treading water, but that is not quite good enough for a party holding four seats in the House of Commons.

The Liberals had a better year, making a small gain nationwide and upping their support in five of the six regions. However, only their increase in Quebec was substantial and their loss of support in Ontario is proportionately more important. The polls at the end of 2012 suggest that 2013 could be a much better year for the Liberals, though.

The year has to be handed to the New Democrats. Though they did drop in two regions, more than the Liberals, one of them was Alberta where they have few prospects. The slip in Quebec is significant but the party still held a lead in the province in 2012. The gains of three points or more in British Columbia, Ontario, and Atlantic Canada could more than make up for the losses in Quebec, and they are also well placed to win more seats in the Prairies. After such a whirlwind 2011, the New Democrats had the most to lose in 2012 - but kept it together.

With their leadership race coming to a close in April, the Liberals will have the most to gain in 2013. How will the next year play out?
Posted by Éric at 11:18:00 AM