April was a jam-packed month, both on the political side and in the number of polls that were released. Justin Trudeau officially became leader of the Liberal Party, an election in British Columbia kicked-off, and 10 federal polls (eight of them national and one apiece in B.C. and Quebec) were published. In all, more than 16,000 people were polled in these 10 surveys giving us a very good sample with which to work. And it turns out that April was a rather remarkable polling month. 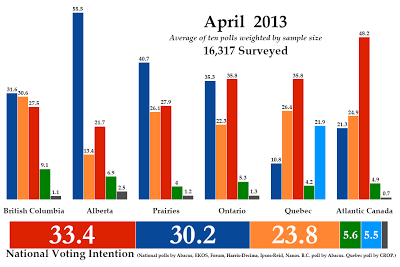 For the first time since June 2009, the Liberals led in the monthly averages with 33.4%, a gain of 5.1 points over their average support in March, and the third consecutive month in which the Liberals increased in support.

The Conservatives averaged 30.2%, down 1.1 points and their worst monthly average on record (going back to January 2009 - a lot of new records were set this month so keep that in mind). This is also their third consecutive month of decrease.

The New Democrats were down 3.3 points to 23.8%, their worst showing since April 2011. The party has been dropping, with a handful of months of stagnation, for 10 months straight.

Unfortunately, there is no recent example of these six polling firms being active within another 30-day window. The most recent period in which all six were in the field was between Aug. 30 and Dec. 3, a little more than three months.

The most significant shift in support at the regional level occurred in Quebec, where the Liberals were up 11.5 points from March to 35.7%. That is, again, their best score on record and the first time they have led in the province since before 2009. The New Democrats were down 6.6 points to 26.5%, their worst result since March 2011 and the first time that the NDP has been under 30% under the leadership of Thomas Mulcair (I said the same thing last month, but that was before adding a CROP poll that had been omitted). The Bloc Québécois was down 0.8 points to 21.9%, while the Conservatives were down four points to 10.8%, their worst result going back to at least January 2009. Quebec is most definitely in flux.

There was less movement in Ontario, but the Liberals were still up 3.9 points to 35.8%, their best score since October 2010 and their first lead in the province since September of that year. The Conservatives were steady at 35.3%, while the NDP was down 3.7 points to 22.3%. In other words, the Liberal gain seems to have come entirely from the NDP, who are down to pre-May 2011 levels of support. The Conservatives have hit a floor at around 35%. The Greens were down 0.8 points to 5.3%.

The Conservatives were narrowly ahead in the April averages in British Columbia, with 31.6% (-1.3). The NDP was down two points to 30.6%, while the Liberals were up 5.6 points to 27.5%. The Greens were down 2.8 points to 9.1%. If we exclude the anomalous month of October 2012 (when the averages were dominated by an outlying Nanos poll), these numbers represent the best Liberal result since June 2009, the worst NDP score since October 2011, and the least amount of support the Tories have registered since November 2010. The B.C. election may be skewing the numbers here, though.

And in the Prairies, the lone bit of good news for the NDP. They were up 2.4 points here to 26.1%, but that still put them in third behind the Liberals. They were up four points to 27.9%, their best score since April 2009. The Conservatives were down 4.4 points to 40.7%, and seem to have exchanged their back-and-forth wobbling for a few bad months. They may be taking a hit here. The Greens were down 2.7 points to 4%. 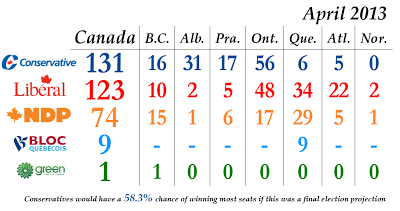 With these levels of support, the Conservatives put their better regional distribution in the West and Ontario to good effect, winning 131 seats in the projection model. That is down eight seats from March.

The Liberal gain came primarily in Ontario, where they picked up seven seats, and in Quebec, where they increased by 14. The NDP's drop also occurred in these two provinces (down six and 10, respectively). The party did pick up three in the Prairies, though, compared to March. But the Conservatives are still in the best position with their dominance in Alberta, Saskatchewan, and Manitoba - as well as their resilience in Ontario. We saw the same thing when the NDP was ahead in the polls: the Tories simply have a better a regional distribution of support.

But if the NDP and Liberals wanted to, they could out-vote the Conservative plurality as they have an easy majority of seats in the House in this scenario.

There were some new numbers on who would make the best Prime Minister and on approval ratings, which generally show positive news for Justin Trudeau. The graph to the left has the details.