Tapping into the Pulse: Order Here! 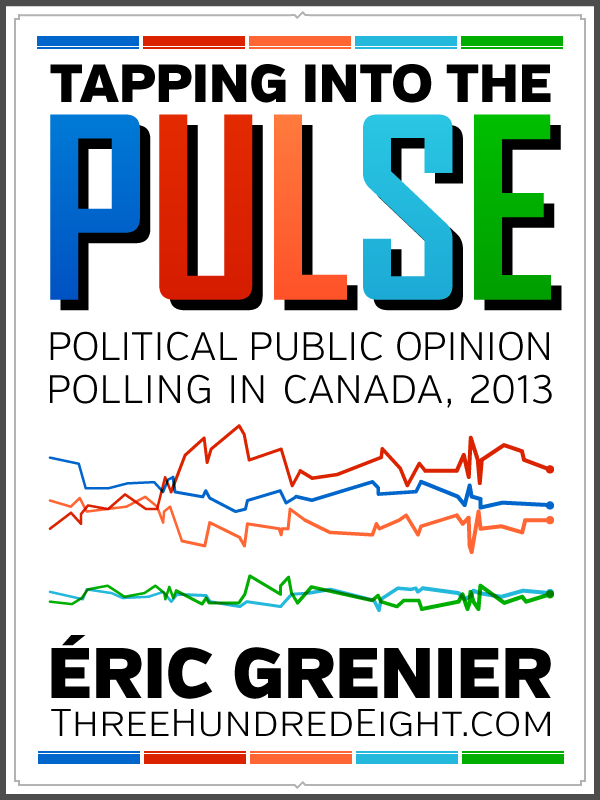 Written by Éric Grenier, author of ThreeHundredEight.com, and with a foreword by Paul Adams, Associate Professor of Journalism at Carleton University, Tapping into the Pulse: Political public opinion polling in Canada, 2013 tells the story of the year in Canadian provincial and federal politics with a special focus on polls.

Federally, this eBook tells the story of how the Liberals made incredible gains under their new leader Justin Trudeau, how the Senate scandal ate away at Conservative support, and how the New Democrats managed in their first full year under Thomas Mulcair. Provincially, it looks at the ups and downs of every premier, how and why the polls were so wrong in British Columbia, why they did the job in Nova Scotia, and what they can tell us about the political situation in Ontario and Quebec as the provinces head towards an election in 2014. Tapping into the Pulse also includes reference tables of polls released throughout 2013 from most of Canada's major pollsters, making it an invaluable resource.

ORDER TAPPING INTO THE PULSE HERE VIA GUMROAD FOR $4.99

The eBook is available in PDF, EPUB, and Kindle/MOBI formats. This makes it readable on pretty much every eReader device.

This eBook is the first to be written and published as a product of ThreeHundredEight.com, and was funded due to the generous contributions of over 200 readers who donated to the Kickstarter campaign of November-December 2013. In return for their pledges, Kickstarter backers received an advanced copy of the eBook.

If you have any questions before putting in your order, please contact me.