The PLQ has risen to 60.36 seats in the statistical projection while the ADQ is down to 13.48. The PQ has remained stable. Nevertheless, this movement is not enough to change the seat projections.

If you're wondering why the ADQ is rounded up to 14 seats, it is because their portion of a seat is more than the other parties.
Posted by Éric at 9:51:00 PM 1 comment: 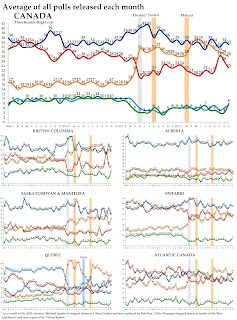 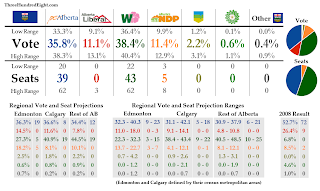 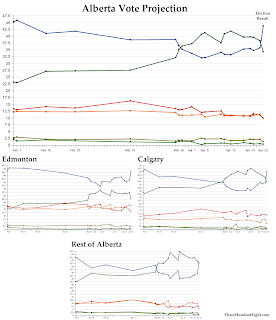 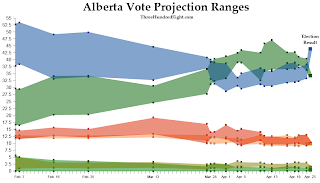 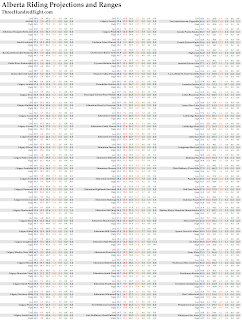 Polling and electoral results are weighted according to the age of the poll, the amount of people polled, and the reliability of the polling firm.

The 2004, 2006, and 2008 federal elections are included because past voting behaviour tends to be a major predictor of future behaviour. Obviously, recent elections are weighted more heavily than older elections.

Older polls are dropped as newer ones are added.

Polling firms are weighted according to their accuracies in national and provincial elections since 2008. In the name of openness, here are the reliability factors of the various polling firms (updated as of the 2010 New Brunswick election) :

The site is now launched!

As time goes on, the Quebec electoral projections will be expanded to include individual ridings.

I'm very excited to take on this new endeavour, and I hope you'll keep reading!
Posted by Éric at 9:40:00 PM 6 comments:

From October 2008 to March 2017, ThreeHundredEight.com provided projections for Canadian federal and provincial elections, focusing primarily on the topic of political opinion polls.

The site was owned and run by me, Éric Grenier, a writer specializing in Canadian politics and history.

He is now a senior writer with the Canadian Broadcasting Corporation.

ThreeHundredEight refers to the number of seats that were in the Canadian House of Commons when the site was launched. This site was inspired by the fantastic work of Nate Silver of FiveThirtyEight, an American data site that does electoral projections for congressional and presidential races, poll analysis, and more. My methods were inspired by but do not mimic his methods.
Posted by Éric at 9:12:00 PM