Now that the campaign has begun, it is a little unusual to look back on the polls in July. But there were a lot of polls conducted last month: 13 in all, interviewing some 24,934 Canadians. So let's look at the numbers, for the sake of continuity at least. 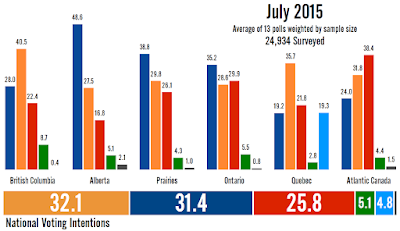 The NDP was in front in British Columbia with their best score on record (going back to January 2009), up 2.8 points to 40.5%. They have made gains worth about 16 points over the last three months. The Conservatives were up 1.1 points to 28%, while the Liberals were down 1.2 points to 22.4%. That's their third consecutive month of decline. That is also the case for the Greens, down 1.3 points to 8.7%.

These levels of support would deliver 130 seats to the Conservatives, 121 to the New Democrats, 84 to the Liberals, two to the Bloc, and one to the Greens.

Compared to June, that represents a drop of six seats apiece for the NDP and Liberals, a slide of one for the Bloc, and a gain of 13 for the Conservatives.

The Conservatives picked up eight seats in Ontario, two in Quebec, and one apiece in British Columbia, Atlantic Canada, and the North. They were down one seat in the Prairies.

The NDP was down five seats in Ontario, two in Alberta, and one in Quebec. They were up one seat in B.C. and one in the Prairies.

The Liberals were down three seats in Ontario, two in Quebec, and one in both Atlantic Canada and the North. They were up one seat in Alberta.

So this was the lay of the land before the race kicked off in earnest. A close race between the NDP and Conservatives with the Liberals losing momentum, and nobody close to a majority government. At least, for now.
Posted by Éric at 11:49:00 AM