The following are ThreeHundredEight.com's projections for the Newfoundland and Labrador election scheduled for November 30, 2015. These numbers were last updated on November 30, 2015, and reflect the best estimates as of November 29, 2015, the last day of polls included in the model. You can click on all of the charts below to magnify them.

Click here to read the detailed analyses from the main site concerning the Newfoundland and Labrador election and new polls.

The projections are subject to the margin of error of the polls included in the model, as well as the inherent inability of the projection model to make perfect estimations of real-world dynamics. The projection ranges are a reflection of the degree of error polls have made in recent elections. The probabilities are based on how polls have differed from election results in the past.

The following chart lists the provincial polls currently included in the projection model that make up at least 95% of the weighted average, as well as the weight each poll carries. It also lists the media outlet that either commissioned or first reported the poll. 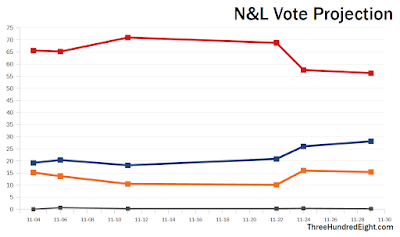 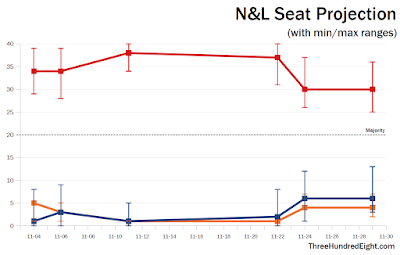 These districts projections are not polls and are not necessarily an accurate reflection of current voting intentions in each riding.

ARCHIVE OF PAST ATLANTIC CANADIAN PROJECTIONS