The following are ThreeHundredEight.com's final forecasts for the upcoming provincial election in Nova Scotia, scheduled for October 8, 2013. These numbers were last updated on October 7, 2013, and reflect the best estimates as of October 7, 2013, the last day of polls included in the model. You can click on all of the charts below to magnify them.

The projections highlighted within the boxes signify the range of most likely outcomes, based on the degree of polling error made in past elections for parties in a similar position. The chart below shows how each party is classified, and the probability that the result will fall within any of the projection ranges.

Based on these probabilities, there is a 68% chance that the outcome of the election for the New Democrats will fall between the best estimate (or average) projection and the high projection. There is an 84% chance that it will fall between the average and maximum projection, and so on. It is, of course, possible that the outcome will fall outside of even the maximum and minimum projected ranges and a new historical precedent for error would be set.

The following chart lists the polls currently included in the projection model, as well as the weight each poll carries. 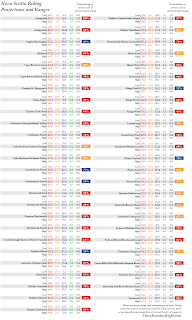 The chart below shows the evolution of the Nova Scotia projection. The shaded bars show the likely and maximum/minimum ranges as well. 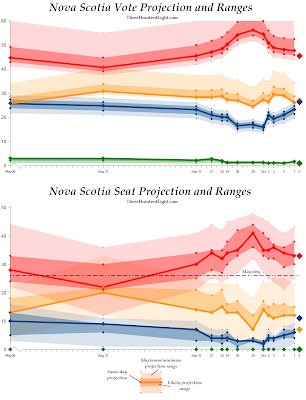 The chart below shows the polls released during the campaign, with each dot representing a result of a poll in the field on each day. 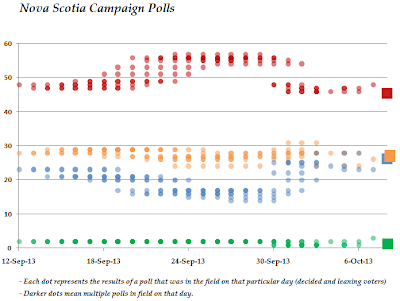