If the New Democrats prevail in October's election, June will have been the month where it became possible. For the first time since 2012, and thanks to some massive spikes in support in a few battleground regions of the country, the New Democrats led in the monthly averages last month.

It was a busy month of polling, perhaps as the pollsters get in their final numbers before breaking for the summer. In all, 11 national and two Quebec polls were conducted, with a grand total of 27,224 interviews. 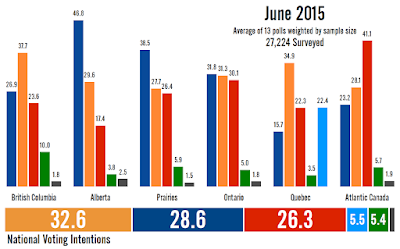 The NDP led in June with an average of 32.6% support, a jump of 4.1 points since May, their fourth consecutive month of increase, and their best score since August 2012.

The Conservatives dropped 1.6 points to 28.6%, their worst since July 2014 and their fourth month of decrease or stagnation.

The Liberals were down 2.1 points to 26.3%, their worst result since February 2013 (before Justin Trudeau became leader) and their 11th consecutive month of stagnation or decline. That is a long series of bad polling months.

The Bloc Québécois, with newly minted returning leader Gilles Duceppe, was up 1.3 points to 5.5%, surpassing the Greens. They were down 1.1 points to 5.4%, their lowest result since September 2014.

The New Democrats experienced a big shift in their polling ranges, scoring between 28% and 36% in polls conducted in June. That compares to a range of 24% to 30% in May. The Conservatives and Liberals were both down in their ranges, the Tories dropping from 28% to 33% in May to 26% to 31% in June. The Liberals went from 26% to 31% to 23% to 32% this month, meaning their floor dropped but their ceiling actually increased a little.

In Alberta, the Conservatives dropped 0.4 points to 46.8%. The NDP was up 2.6 points to 29.6%, their best on record, while the Liberals were up 0.6 points to 17.4%. This was the only province or region in which the Liberals saw their poll numbers improve. The Greens were down for the third consecutive month here, falling 1.2 points to 3.8%.

The race is about as close as it gets in Ontario. The Conservatives edged out the other parties with 31.8%, down 2.7 points and their worst result since July 2014. The NDP was up 6.4 points to 31.3%, their best since June 2012 and marking a gain of 13 points in just four months. The Liberals were down 2.2 points to 30.1%, their worst since February 2013. They have been stagnant or dropping in Ontario for nine consecutive months. The Greens were down 1.4 points to 5%.

The New Democrats held on to the lead in Quebec despite dropping 0.7 points, falling to 34.9%. The Bloc Québécois moved into second, picking up 5.9 points with the arrival of Duceppe to reach 22.3%. That is the party's best result since February 2014, well before Mario Beaulieu's tenure. The Liberals were down 2.6 points to 22.3%, their worst since the end of 2012 and their ninth consecutive month of decline. The Conservatives were down 0.7 points to 15.7%, while the Greens were down 1.2 points to 3.5%.

With these levels of support, the NDP would likely win 127 seats, a gain of 18 over May's projection. The Conservatives would win 117 seats, a decrease of 11 seats, while the Liberals would win 90 seats (down nine). The Bloc would take three seats and the Greens one.

The NDP made big strides in the seat count in British Columbia (up six) and Ontario (up eight), while also picking up a handful of seats in Alberta (two), the Prairies, and Atlantic Canada (one each). But their new position is largely due to their gains in B.C. and Ontario.

The Conservatives accordingly lost seats in B.C. and Ontario, dropping four in each. They were also down a seat in Alberta, the Prairies, and Quebec.

The Liberals were down four seats in Ontario, two in Quebec, and one each in B.C., Alberta, and Atlantic Canada.

The Bloc has gone from zero seats in May to three, while the Greens have gone from two to one.

We can see where the NDP's path to a plurality is located with these numbers. They need to maintain a sizable lead in British Columbia and Quebec, while splitting Ontario three-ways. That is enough to put them in a position to win more seats than the Conservatives, and thus likely giving them the opportunity to form a minority government. It is still a razor's edge, though. That gap of 10 seats over the Tories is very fragile, considering the potential for error in both the polls and the seat projection model. Nevertheless, it is remarkable that the NDP is in this position when, just a few short months ago, they were an afterthought in the race.
Posted by Éric at 10:03:00 AM