If the Liberals are looking for some good news on the polling front, Newfoundland and Labrador is probably the best place to look. The latest poll from Abacus Data for VOCM shows the federal (and provincial) Liberals are still well in front in the province, the only one the party won in the 2011 federal election.

It means that most of the contests in Newfoundland and Labrador should be easy enough to call, with the exception of one. As far as political drama goes on the Rock, it could all be limited to the battle for St. John's South - Mount Pearl. 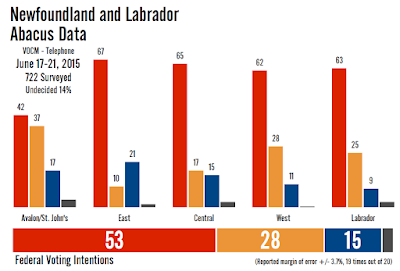 The Liberals led in this poll with 53% support, down five points since Abacus Data's last poll of February 17-25.

The New Democrats leap-frogged the Conservatives into second place, jumping 12 points to 28%. The Tories fell eight points to 15%.

Another 3% said they would vote for another party (recall that in 2011 the Greens fell just short of 1% in this province), while 14% were undecided.

The trend has been a very positive one for the New Democrats, who were at just 13% in Newfoundland and Labrador in Abacus's poll of July-August 2014. The Conservatives have been on a consistent slide since then, down 12 points overall. That the Liberals are down just one point from that poll one year ago suggests the recent decrease is, in relative terms, very modest.

What isn't modest is the increase that Thomas Mulcair has experienced in the province. In February, just 28% of Newfoundlanders and Labradorians said they had a positive impression of the NDP leader. That has jumped 15 points to 43%, putting him in a tie with Justin Trudeau (down three points). But Mulcair's negative rating, at 14%, is a third less than Trudeau's 21%.

The two are miles ahead of Stephen Harper, though. Only 14% have a positive impression of the Prime Minister, while 69% have a negative one. And that latter score is up five points since February. The Conservatives don't stand much of a chance anywhere in the province.

The regional results demonstrate that quite clearly. The Conservatives did no better than 21%, in eastern Newfoundland, and that put them 46 points behind the Liberals. The New Democrats, trailing by at least 34 points outside of the Avalon Peninsula and St. John's, are also not in the running outside of the capital, where they experienced a significant boost since the February poll.

And that pretty much sums up much of the race in Newfoundland and Labrador. The Liberals look very safe in Labrador and in the three ridings west of the Avalon Peninsula (which is pretty much how Abacus divided up its poll).

With the province wide numbers, and looking at the seat projection model, the Liberals would likely win Avalon quite comfortably by some 20 points. St. John's East should still be a landslide for the NDP's Jack Harris (50-60 points).

St. John's South - Mount Pearl is where it is interesting. The model gives the Liberals the slight edge, at 43% for Seamus O'Regan to 40% for the NDP's incumbent MP Ryan Cleary. But that is a tiny advantage considering the margin of error of the Abacus poll itself and the margin of error of the seat projection model. It means the riding is a legitimate toss-up, and the only game in town.

Having a Ball, ball in Ball's court, a whole new Ball game, etc.

The provincial regional results were also very similar to those at the federal level.

But the breakdown of how voters feel about the three provincial leaders is worth a closer look.

Dwight Ball of the Liberals is the most popular leader, with the highest positive rating at 44% and the lowest negative rating at 16%. That is a slight worsening from his scores in February, but within the margin of error.

Earle McCurdy of the NDP also has some good numbers, particularly for such a new leader. His 36% positive rating is better than Premier Paul Davis, and his 19% negative rating is quite low.

At first glance, the numbers for Davis aren't so bad. His negative rating is far lower than Harper's, and a good 38% of people still have a firm opinion of him to form. His positive rating, at 32%, is not so far behind the others.

Newfoundlanders and Labradorians may not be giving Davis much of a chance. Fully two-thirds think the Liberals will win in November, and 63% agree that the Liberals are 'ready to be government'. That contrasts sharply to the 37% who say the same about the NDP, but a strong showing in October's federal election may have an impact. It could be an interesting election yet!
Posted by Éric at 11:37:00 AM