A total of nine polls interviewed over 16,000 Canadians throughout the month of May, recording one of the most dramatic swings in voting intentions in years. 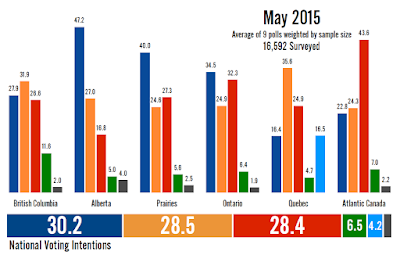 The Conservatives led in polls conducted in May, averaging 30.2% support. That was a drop of 2.2 points from April, however, and marked the third consecutive month of decrease for the Tories from 33%. It was their worst score since October 2014, and a significant departure from the 32% to 33% the Conservatives had managed over the previous six months.

The big shift boosted the New Democrats into second place, the first time they've polled this high in over two years, the last time being January 2013. The NDP was up 5.5 points to 28.5%, marking their third consecutive month of increase from 20% support three months ago. There have only been two cases of a jump this large in voting intentions since the end of 2008: when the Liberals jumped six points between June and July 2014, and when the NDP surged in the 2011 election campaign.

The Liberals were down 2.1 points to 28.4%. They have dropped or have been stagnant for 10 consecutive months now, having polled at 39% at their peak. May's score was their worst since March 2013, or the month before Justin Trudeau became party leader.

The Greens were down 0.9 points to 6.5%, while the Bloc Québécois was down 0.1 point to 4.2%. An average of 2.3% of Canadians said they would vote for another party or independent candidate.

There were big changes in the NDP's voting intentions everywhere, but one of the biggest was in British Columbia. The NDP jumped 7.2 points to 31.9%, their best since March 2013 and their first lead since last fall. The Conservatives were down 2.9 points to 27.9%, their worst since July 2014, while the Liberals were down 1.9 points to 26.6%. They haven't been that low since January 2014. The Greens were also down, slipping two points to 11.6%.

The only good news for the Conservatives was in Alberta, where the stink of the provincial campaign seems to be drifting away. The Tories were up 3.6 points to 47.2%, halting a three-month decline. The New Democrats were up 3.5 points to 27%, their best on record. Their previous best before the recent surge was 21% in early 2012. The Liberals were down big, plummeting 6.1 points to 16.8%, their worst since January 2013. The Greens were down 0.9 points to 5%.

In Quebec, the New Democrats surged 7.2 points to 35.6%, their best since August 2012, when Thomas Mulcair was at the tail-end of his leadership honeymoon. The Liberals, who were at 37% eight months ago, continued their slide by 1.3 points to hit 24.9%, their worst since March 2013. Mario Beaulieu's Bloc Québécois was down 1.3 points to 16.5%, while the Conservatives fell 4.7 points to just 16.4%. That is their worst score since December, when the party started to see improvement in the polls. The Greens were down 0.2 points to 4.7%.

With these levels of support, the Conservatives would likely win a plurality of seats with 128, followed by the New Democrats at 109, the Liberals at 99, and the Greens with two. The Bloc would be shutout.

Compared to April, this is a 15-seat drop for the Conservatives, a 14-seat decrease for the Liberals, and a 30-seat increase for the NDP. The Bloc had been projected to win one seat with the April averages.

The seat changes demonstrate the shift that took place in May, and the real world consequences of them. The NDP picked up seven seats in British Columbia, three in the Prairies, seven in Ontario, 11 in Quebec, and two in Atlantic Canada. It retained its projected wins in Alberta and the North.

The Liberals fell one seat in British Columbia, one in Alberta, one in the Prairies, five in Ontario, four in Quebec, and two in Atlantic Canada.

Early June polls suggest that the three-way race is not going anywhere, though so far there has been some disagreement as to whether it is the Liberals or the NDP that is seeing its momentum shift (if at all). The split to the left of the Conservatives certainly helps the Tories, but the party is still in a very dangerous position. Compared to 2011 (and the 308-seat House), the NDP is up six seats and the Liberals are up 65. The Conservatives are down by almost 40 seats.

In 2008, Stephen Harper successfully (and somewhat aptly) portrayed the coalition attempt as a coalition of losers. The Liberals had dropped, the NDP had made only modest gains, and the two parties needed the Bloc to survive in power. But if these numbers are repeated on election day, it would be hard to portray the Liberals and NDP in that light again.
Posted by Éric at 10:13:00 AM