How the cities went in the federal election

In many ways, Justin Trudeau's victory on Oct. 19 was an urban one, with the Liberals virtually sweeping the urban ridings and winning just enough rural ones to put them over the top for a majority government.

The Elections Canada results page, in addition to showing the breakdown of the results by province, also has the option to show the results in major centres. I'm not quite sure how those are defined (likely any riding within a CMA), and these results are the preliminary results, but they do give us an indication of how each of these major centres voted in the federal election.

UPDATE: The definitions for each major centre can be found here. As you can see, Elections Canada used a wide brush to define these.

In the chart below, I've included all of the major centres that Election Canada defined as having at least three ridings. None of this information is original — but considering the way that Elections Canada has the data organized (you can only see four at a time) I thought it would be useful to compile it all in one place. 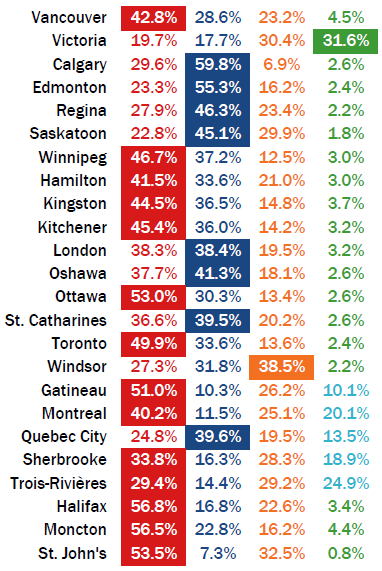 But the Liberals also did very well in other big centres, topping 40% in Winnipeg, Hamilton, Kingston, Kitchener-Waterloo, Ottawa, Gatineau, Halifax, Moncton, and St. John's. They also managed to eke out victories in Sherbrooke and Trois-Rivières, the last two some real signals of how the Liberals broke through in francophone Quebec.

Outside of Atlantic Canada, the Ottawa-Gatineau region was the major centre that voted in the largest numbers for the Liberals.

The party also did quite well in the southern Ontario cities like London, Oshawa, and St. Catharines-Niagara, centres they lost to the Conservatives by narrow margins.

Surprisingly, the Liberals placed second in Quebec City and Regina. Only in Victoria, Saskatoon, and Windsor did the Liberals finish in third place. And it is something to see the party sitting at just under 30% in Calgary.

The Conservatives won the cities in Alberta and Saskatchewan by very wide margins, and managed to squeeze out the Liberals in London, Oshawa, and St. Catharines-Niagara. The party did very well in Quebec City, winning it by 15 points.

The Tories also had strong second-place showings in Winnipeg, Kingston, and Kitchener-Waterloo. Its numbers in Montreal and Gatineau were unsurprisingly low, but the party also put up poor numbers in Atlantic Canada and in both Vancouver and Victoria, though their Vancouver numbers were enough to place them second.

And that is because the New Democrats were pushed out of the urban centres in big ways. The only city they won was Windsor, with just under 39 per cent, and in only St. John's and Victoria (which the NDP narrowly lost to the Greens) did the party manage more than 30% support.

In addition to those two cities, the NDP also finished second in Saskatoon, Gatineau, Montreal, Sherbrooke, Trois-Rivières, and Halifax.

The Bloc had poor numbers in the five major centres in Quebec, putting up their best results in Trois-Rivières and Montreal, where they took over 20% support.

The Greens won Victoria by the skin of their teeth (and thanks to Elizabeth May), but nowhere else did better than 4.5% support.
Posted by Éric at 9:30:00 AM