The provincial election in Newfoundland and Labrador was kicked off yesterday and will come to a close on November 30, but it is not setting up to be as exciting as the federal campaign that just came to an exciting finish. Instead, the campaign in Newfoundland and Labrador starts with the Liberal Party under Dwight Ball enjoying a 47-point lead over his nearest rival, the incumbent Progressive Conservative government of Paul Davis.

This is from the latest survey from Abacus Data. And with the start of the campaign comes the launch of the projection model for the Newfoundland and Labrador election, the first to use the three-election swing model I outlined earlier.

This campaign poses a few problems for the projection model. Before taking a look at the Abacus poll, let's go through them.

The first is the redistribution of the province's 48 districts into just 40. That represents a great deal of change and the combination of old districts into these smaller new ones. Because of the enormity of the changes, it makes it a tricky election to call with this three-election swing model.

Luckily, Kyle Hutton provided me with the transposition of the 2011 results onto the new boundaries. And the spreadsheet he designed helped me calculate the transposition for the 2003 and 2007 elections as well. So thanks to Kyle for that. You can follow him on Twitter here.

The second and third difficulties are compounded by the first: there were a large number of by-elections in the last legislature, and they featured some incredibly massive shifts in support. There were also a number of floor-crossings, which is doubly complicated in Newfoundland and Labrador due to the importance of the local candidate.

Now that these by-election results and floor-crossing incumbent MHAs have been split among multiple ridings, it makes it difficult to know what impact they will have within the new district boundaries. I have tried to estimate what the results would have been throughout the new ridings when a by-election took place within its boundaries, and have applied the floor-crossing factor as I would normally.

Then there is the matter of Newfoundland and Labrador's small population. It makes it much more difficult to project outcomes when a riding has a smaller population that can more easily swing in one direction or another, particularly when we're seeing such a massive shift in support as we are in this election.

Taken together, this leads me to encourage readers to exercise a great deal of caution with the seat projections, and to rely more than ever on the seat ranges. And as there are a relatively small number of ridings considered at play in the likely ranges, I'd also suggest concentrating on the 95% confidence interval — so the maximum and minimum ranges.

My urging of caution is doubly so for the riding-by-riding projections, which are primarily there to show how I come to my province-wide totals.

So where does that put us at the start of this campaign? It suggests the Liberals could win between 29 and 39 seats, putting them well over the 20-seat mark required for a majority and putting a near-sweep within their grasp (even the likely ranges top out at 38 seats).

The New Democrats are projected to win five seats, but that is up against their very maximum: instead, their range puts them between one and five seats, within the Tories' band of between zero and eight seats. As the incumbent government, however, the PCs have a better chance of winding up in the average to maximum range (one to eight seats) than does the NDP. So despite the average projection, I'd still call the PCs the favourites to form the Official Opposition at this stage. 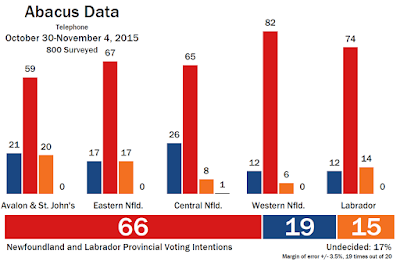 The Abacus poll gives the Liberals 66% support, almost exactly where the federal Liberals ended up on October 19 and higher than any other result the NL Liberals have recently managed (their previous high was 60% to 62% a year ago).

Across the board, the numbers in this Abacus poll were stellar for the Liberals. Fully 73% of Newfoundlanders and Labradorians would consider voting for them, compared to just 37% for the NDP and 32% for the Tories. A majority of voters would not consider voting for either the PCs or the NDP. And three-quarters of people in the province think the Liberals will win, including half of PC voters and two-thirds of NDP voters.

But Ball is head and shoulders above both of these, with 50% of Newfoundlanders and Labradorians holding a positive impression of the Liberal leader. Just 10% hold a negative view.

The trump card for Ball, though, is that 60% of voters think it is "definitely" time for a change of government, while another 25% think a change would be good but is not necessarily important. Only 9% think the PCs should be re-elected.

So it will take some doing for the Liberals to lose this one. For now, the thing to watch is whether either the PCs or NDP can do something to avoid the election turning into a complete landslide. The federal Liberals went 7-for-7 on election night in Newfoundland and Labrador. Something very close to 40-for-40, with these sorts of numbers, is likely for the provincial Liberals on November 30.
Posted by Éric at 12:27:00 PM