Justin Trudeau's honeymoon continued into January, but a small dip in Liberal support in some key provinces suggests the love affair may be settling down a little. Nevertheless, the Liberals still hold a very wide lead over their rivals.

(Note that the provincial polling averaged for January have also been updated. Scroll to the bottom of this post.)

Three national polls and one Quebec-only poll was conducted in the month of January, totaling a little more than 10,000 interviews. 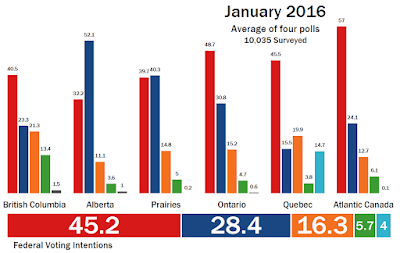 The Liberals averaged 45.2% support in January, down one point from their December 2015 averages. The Conservatives followed with an average of 28.4% support, down 1.2 points.

But it should be noted that the Conservatives never averaged anything close to 45% throughout their tenure in office, while the New Democrats, at just over 16%, are where they were a few months before the 2011 federal election. 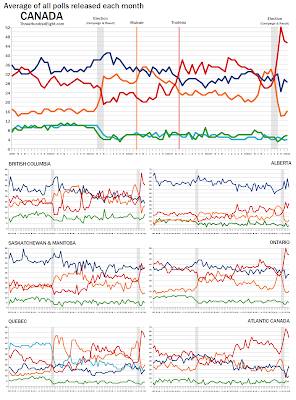 The Liberals led in British Columbia with an average of 40.5%, followed by the Conservatives at 23.3% and the New Democrats at 13.4%. The Greens were up for the third consecutive month to 13.4% in the province.

In Saskatchewan and Manitoba, the Conservatives narrowly edged out the Liberals with 40.3% to 39.7% support. The NDP followed at length with 14.8%, while the Greens were at 5%.

The Liberals dropped for the second consecutive month in Ontario, falling slightly to 48.7% support. The Conservatives took advantage and were up to 30.8%, while the NDP was at 15.2% and the Greens at 4.7%.

This would likely deliver between 74 and 98 seats to the Liberals, with the Conservatives winning between 18 and 38 seats and the New Democrats between four and 10.

In Quebec, the Liberals led with 45.5% support, with the NDP in second at 19.9%. The Conservatives stood at 15.5%, the Bloc Québécois at 14.7%, and the Greens at 3.8%. With these numbers, the Liberals would virtually sweep Quebec with between 59 and 70 seats, leaving eight to 13 seats for the Conservatives and zero to three seats apiece for the NDP and Bloc.

In all, the Liberals would likely win between 196 and 251 seats with these levels of support, a significant increase over the 184 seats the party currently holds but down a little from their December projection. 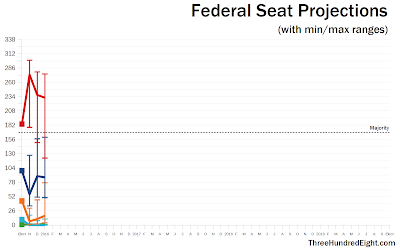 The chart above shows the progression of seat projections based on the monthly averages. Unlike the table showing the projections for January, this chart increases the ranges to the minimum and maximum tallies, which includes 95% of all projected outcomes.

You can see that despite the small drop in projected seats for the Conservatives, their maximum projected range has inched up since December, and is significantly higher than in December. The NDP has seen a steady increase at their maximum range.

The Liberals are still coming down from their post-election highs, as might be expected. They have dropped for two consecutive months in British Columbia, Ontario, Quebec, and Atlantic Canada — but in all of these regions the party is still over 40% support. Nothing for them to worry about just yet, as the party is still comfortably ahead of the 39.5% of the vote the Liberals captured in October.

Though the Conservatives were up again in Ontario and Atlantic Canada, they were mostly holding steady. The NDP had upticks in British Columbia and Quebec, but was also wobbling back and forth in Ontario and Alberta.

This could be the holding pattern for some time, as Canadians checkout of the day-to-day political coverage and withhold their judgment until the Conservatives (and possible the New Democrats) deal with their leadership issues. 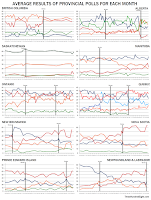