Just two polls were conducted in December, so we're still in a light polling phase. But the Liberals continued to lead by a very wide margin in the monthly averages. 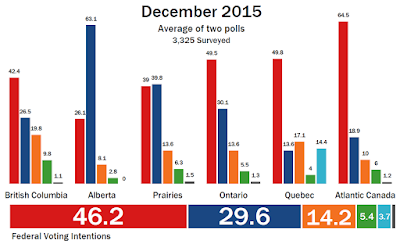 The shift between the Liberals and Conservatives is rather large by normal standards, but since we're only talking about four polls (two in November, two in December), it may look bigger than it actually is. November's tally, taken in the wake of the federal election, may also have been a little exaggerated. 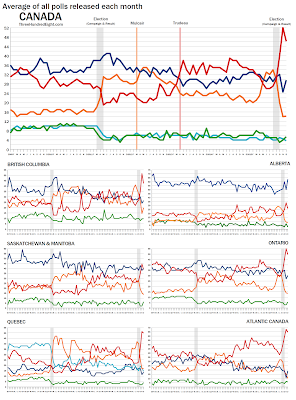 Regionally, the Liberals still led in British Columbia, though the margin between them and the Conservatives shrank. The NDP was also up.

With these levels of support, the Liberals would win between 209 and 237 seats, expanding their majority government significantly. They would put up some very strong showings in British Columbia and Ontario, and virtually sweep both Quebec and Atlantic Canada.

So the Liberal honeymoon continues unabated. If there are any worrying signs in these numbers for any party (and no party should be worried this far out), it is that the New Democrats have not seen any rebound yet from a post-election frenzy for the Liberals, whereas the Conservatives are back to the numbers they have had in the polls for most of the last few years.
Posted by Éric at 12:05:00 PM