In the post below you'll find an explanation of the endorsement rankings system that is being used for the 2015 Parti Québécois leadership race.

This is an attempt to quantify the on-going PQ leadership race by tracking endorsements. ThreeHundredEight.com has had some success in the past with this method, providing a good indication of establishment support within a party that can often replicate, or come close to, final voting results.

In the 2011 Bloc Québécois race, Daniel Paillé led the endorsement rankings throughout and eventually came out as the winner. In the 2012 New Democratic race, Thomas Mulcair and Brian Topp were shown to be the two frontrunners and, on the day of the convention, correctly estimated that Mulcair would beat Topp on the fourth ballot. In the 2013 Liberal race, the estimate was almost exactly right.

But as the system tracks endorsements, which generally come from the party establishment, the rankings can also tell us something about the results after the fact. In 2012, the system under-estimated Nathan Cullen's support, but that may have been more of an indication that his ideas were more popular within the membership than they were within the party establishment. As he was suggesting co-operation with the Liberals and Greens, that might have been expected.

The endorsement rankings use a simple system of assigning a value to each endorser. These values came about somewhat arbitrarily, but in addition to having been used to some success in 2011, 2012, and 2013 the values were calculated based on previous leadership races, as indicated here.

Generally speaking, party leaders and veteran MPPs are the most valuable endorsements to land. The chart to the left breaks it down by endorser.

Why use this system at all? It is one of the few ways to quantify a leadership race in Canada. This isn't the United States, where registered voters can cast a ballot in the primaries, and where polls are generally reliable. There are no primaries here, and polls can only ask all Canadians or supporters of a particular party who they prefer. Neither of these are necessarily representative of how the membership feels (though the membership may be influenced by general perceptions of the race).

The endorsement tracker, then, almost acts as a reflection of the group-think. That can sometimes be self-reinforcing, but generally speaking the consensus opinion will be a good one. There are always exceptions (Christy Clark and Patrick Brown won with almost no establishment support), but the endorsement rankings can be a good way to keep tabs on the race. At the very least, it gives a strong indication of what the party establishment thinks. If the membership disagrees, then that in and of itself will be a result. 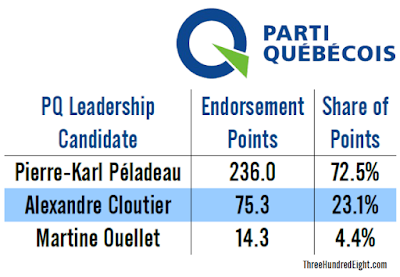 The chart above, updated May 13, 2015, shows the total endorsement points each candidate has received in the Parti Québécois race, and their respective share of that total. Note: the percentages are the share of points, not the share of endorsements. 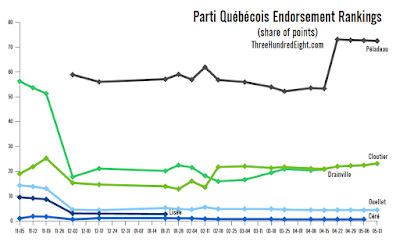 The chart above tracks the weekly vote share score for each of the candidates.

The chart to the left shows the endorsements the candidates have received and the respective values of these endorsements (you can click on it to magnify the chart).