With the provincial elections behind us, the leadership races for the New Democrats and the Bloc Québécois now stand as the two most important political events scheduled for the next five months. With this in mind, ThreeHundredEight now turns to these leadership races.

A few weeks ago, I read an interesting piece on Nate Silver's FiveThirtyEight that talked about Republican presidential nominee endorsements, and how they are a good indicator of who is likely to perform well in the primaries. It got me thinking how this could be applied to leadership races in Canada.

That leads me to present ThreeHundredEight's endorsement rankings, which will be maintained and updated throughout the race for both the NDP and the Bloc, and perhaps the Liberals once that campaign gets started. You'll also see charts tracking leadership polls in the right-hand column for the NDP race.

A few caveats: this is, in no way, a scientific method that is meant to have any precise predicting capability. It is just one way to interpret the endorsements and what they might mean in the respective leadership races. And they are just to make the race a little more fun.

So how does it work?

Points are assigned for each endorsement received by a candidate. The amount of points assigned, much like Nate's system, is somewhat arbitrary. But, I did use the 2006 Liberal and 2003 NDP leadership races to calibrate the points system, so they are based on something real. 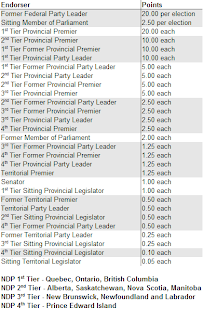 The chart on the left spells out the points system. Having the endorsement of a former party leader is most important. For every election the former leader led the party, 20 points are assigned.

The endorsements of Members of Parliament are also very important. For every election they have won, 2.5 points are assigned to the leadership candidate. This means an MP who has been around for a long time is worth more than one who was just recently elected.

Former MPs give a candidate two points, while senators (though I don't expect any to come forward in these two races) are worth one point.

Having the support of a current or former provincial premier or party leader is also quite important, but that importance is based on what province the leader comes from. For the NDP race, Quebec, Ontario, and British Columbia are considered "first tier" provinces. Alberta, Saskatchewan, Nova Scotia, and Manitoba make up the second tier, New Brunswick and Newfoundland & Labrador make up the third tier, and PEI is in the fourth tier. The territories are in a fifth tier of their own. These tiers were determined by the number of votes received in the 2011 election, as well as the strength of the party brand in each province and whether the party is in government.

Obviously, these are somewhat arbitrarily chosen. And this is why I emphasise that this is not a scientific exercise, it is just a spot of fun. But the points were not chosen completely out of the air. Let's look at how the system performs for the 2006 Liberal leadership race. 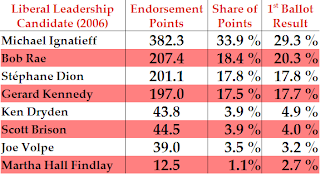 As you can see, aside from Scott Brison earning more points than Ken Dryden, the points sytem does a good job of estimating first ballot support. Of course, this should be expected. The Liberals used a delegate voting method where endorsements were the name of the game. But there were still some delegates undecided going into the first ballot.

After the first ballot, Joe Volpe and Scott Brison went over to Bob Rae while Martha Hall Findlay went over to Stéphane Dion.

Assigning their endorsement points accordingly gives us a good result, with the order of the candidates correct and their share of the points closely lining up with the results of the second ballot. After that ballot, Dryden went over to Rae and Gerard Kennedy went over to Dion.

After the third ballot, Rae dropped out but didn't lend his support to any other candidate. Dryden and Volpe went over to Dion while Brison went over to Ignatieff.

And after assigning their endorsement points, Dion wins more than half of them and his share of the points matches well with the fourth ballot result.

After using the Liberal leadership race to calibrate the points system (which did not need too much tweaking after my own estimates to start the process), I moved to the 2003 NDP leadership race. It used a bit of a mixed system of delegates and one-member, one-vote (OMOV). So, it was a different kettle of fish.

The big difference in this race was that Bill Blaikie had most of the individual endorsements, but Jack Layton had the support of Ed Broadbent. That was crucial, and so I was able to calibrate the points system by taking into account Broadbent's influence.

As you can see, aside from the vote share of the three bottom candidates, the points system matches up relatively well with the results of the first, and only, ballot.

I understand that the points system is fitted for these past leadership races, so they should line up well. But that it can be used across two different kinds of leadership races with generally good results indicates that the endorsement ranking I will be using for the next five months is not meaningless. Will it predict the outcome closely? Probably not, but that is not its purpose. It is simply an interpretation of the endorsements that tells us something about the race. Having endorsements generally means a better and/or more motivated organization, and a better and/or more motivated organization will more successfully deliver votes on the metaphorical convention floor.

So, now that the explanation is out of the way, let's look at how the endorsements stack-up in the Bloc Québécois leadership race.

Daniel Paillé, who is probably best known considering his background as a cabinet minister in Quebec, leads the endorsement ranking with 30 points, or 50% of all available endorsement points. Maria Mourani has 19.5 points to 32.5%, while Jean-François Fortin has 10.5 points ot 17.5%. 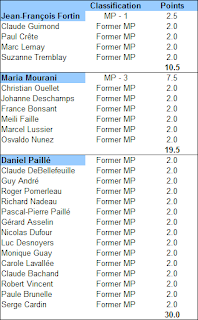 This endorsement ranking actually lines up pretty well with the only poll we have, taken in early September. It put Paillé at 11% among BQ supporters, ahead of Mourani (6%) and Fortin (3%).

As you can see in the chart to the left, this race is not very dynamic. There are only four sitting MPs and two of them are in the race. Their own "endorsements" for themselves are the most important factors. All the other endorsements come from former Bloc MPs.

Perhaps if a few MNAs step-in or one of the former PQ leaders stands behind one of the candidates things could get a bit more interesting. But as it stands, Paillé has the backing of more former MPs than any other candidate.

Now, onto the New Democratic leadership race. This is a much more dynamic one, as endorsements have come in from provincial party leaders, sitting premiers, former federal leaders, and provincial legislators from across the country. 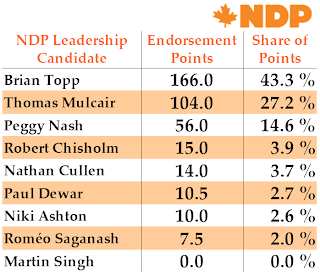 Not surprisingly as he is seen as the "establishment" candidate, Brian Topp has the most endorsement points with 166, or 43.3% of all endorsement points currently on the table. If this result was repeated on voting day, Topp would not win on the first ballot.

Thomas Mulcair comes in second with 104 endorsement points, or 27.2%. He has the most individual endorsements, but as most of them are from first time MPs from Quebec they are not worth as much as Topp's. This, I think, will reflect the organizational weakness the NDP has in the province, as well as its low number of members (though that number is going to increase as the campaign drags on).

(Right-click and open the chart to the left in a new window to be able to magnify it.)

Coming in third is Peggy Nash, thanks in large part to the support of former leader Alexa McDonough. She comes in at 56 endorsement points, or 14.6%.

If we can consider Topp and Mulcair to be first tier candidates and Nash a second tier candidate, we then get into the third tier. Now, any one of these could move up as the campaign goes on. Some of them have just jumped into the race recently. And the fact that someone like Nathan Cullen or Paul Dewar does not have a lot of endorsements might not mean anything in a OMOV system if they have good grassroots support, but the rules of the game being what they are, we have Robert Chisholm, Cullen, and Dewar as what I would consider the third tier candidates.

Chisholm is narrowly on top of the others due to his support from Atlantic Canada (i.e., Darrell Dexter), while Cullen and Dewar so far are relying on endorsements from provincial MLAs in British Columbia and Manitoba, respectively.

Niki Ashton and Roméo Saganash round out the main candidates, in what I'd call a fourth tier. Both of them have the support of two sitting MPs, but Ashton's longer time in the House of Commons puts her ahead of Saganash. Martin Singh has no endorsements at this point.

There we have it. The endorsement rankings put Brian Topp and Daniel Paillé ahead of the others for their respective parties. But I hope the killjoys out there won't take it too seriously. Does it have limitations? Absolutely. But that doesn't mean we can't have some fun with it. And since this isn't set in stone, I'm happy to hear your suggestions on how it can be improved.

The Bloc race is going to be wrapped up in a month, but the NDP race is just getting started. It will be interesting to see how the rankings twist and turn over the next five months.
Posted by Éric at 11:31:00 AM