How safe is Toronto for the OLP?

Two of the five Ontario by-elections that took place last week were held in Toronto. The city is considered the last fortress of the Ontario Liberals, as they won 17 of its 22 ridings in the 2011 provincial election and, whenever their numbers tank province-wide, they always seem capable of holding on to a majority of Toronto's seats.

But the by-elections put a bit of a chink in that armour. The Progressive Conservatives won Etobicoke-Lakeshore with 47% to 42% of the vote, after having placed second in the riding in 2011 by a margin of 51% to 29%. The Liberals held on to Scarborough-Guildwood with a 36% to 31% win over the Tories, while the New Democrats placed third with 28%. But the Liberals had taken 49% in 2011, compared to 29% and 19% for the PCs and NDP, respectively.

If similar swings in support take place throughout the city in the next provincial election, the Liberals could see themselves win only a handful of ridings in Toronto and booted out of government - without even losing a single seat outside the city.

Of course, by-elections are special beasts and the Tories and NDP won't be able to put up candidates with the name recognition of Doug Holyday and Adam Giambrone throughout the city. Turnout was lower and voters in these ridings were not at any risk of toppling a government, so the implications of the shifts in support that occurred should not be stretched too far. Nevertheless, let's take a look at what these by-elections represent in terms of the potential threat they pose to the Liberals' other Toronto ridings. 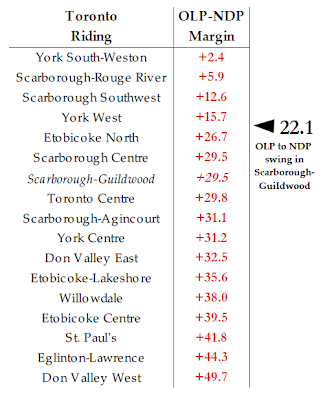 Somewhat surprisingly, the New Democrats may not pose the biggest threat to the Liberals in Toronto by this measure (through realistically, they probably do). The swing in support that occurred between the Liberals and NDP in Scarborough-Guildwood was worth 22.1 points - not enough to put the riding in the NDP's column but more than enough to swing four ridings over to the New Democrats from the Liberals: York South-Weston, Scarborough-Rouge River, Scarborough Southwest, and York West. That these are all clustered close together gives an indication of where the NDP need to put their efforts in the city in the next election.

Apart from these four, however, the New Democrats have little scope for growth. The next riding on the list is Etobicoke North, and there the Liberals placed ahead of the NDP by almost 27 points. It means most of the Liberals' Toronto ridings are safe from the NDP. However, few of those safe seats are outside of the range of the PCs. 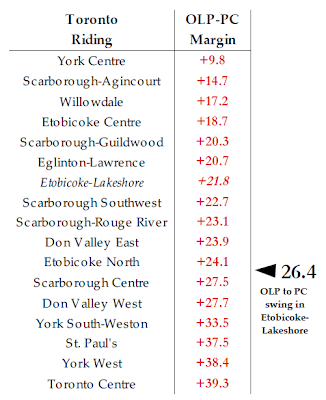 The total swing between the Progressive Conservatives and Liberals in Etobicoke-Lakeshore was an impressive 26.4 points. That is enough to put 10 seats inside Toronto within the grasp of the Tories - a huge number. In two of them, Scarborough Southwest and Scarborough-Rouge River, the New Democrats are better placed than the Tories. But in the other eight the swing that occurred in Etobicoke-Lakeshore would give the PCs a win.

Holyday's might have been too much of a boost for the Tories to replicate throughout the city. But, as the chart above shows, Etobicoke-Lakeshore was pretty far down the list on ridings the Tories could have won in Toronto.

If all went perfectly for the New Democrats and Progressive Conservatives in the city, as many as 12 ridings could swing over from the governing Liberals to the opposition parties. That alone would drop the Liberals to only 38 seats, against 45 for the PCs and 24 for the NDP. And, of course, if the Liberals are losing 12 seats in Toronto they are undoubtedly losing many more outside of the city. It certainly means a majority for the PCs and Official Opposition for the NDP.

If we take out the Holyday and Giambrone factors, though, the Liberals still look vulnerable. It would not take much for the NDP and PCs to each pick up two seats on their list, dropping the Liberals to 46 seats and only seven up on the Tories - seats that would be quite easy to pick-up elsewhere (six non-Toronto ridings were won by the OLP over the Tories by less than five points in 2011, for starters).

The by-elections are not necessarily harbingers of things to come, but the results in Etobicoke-Lakeshore and Scarborough-Guildwood certainly should put the Liberals on notice that they will have to fight to hold on to some of their Toronto seats in the next campaign. Having a Toronto-based premier in Kathleen Wynne will not be enough - and if the party is focusing efforts on holding their backyard it does not bode well for their chances outside of Toronto.
Posted by Éric at 9:24:00 AM