Federal polling has hit a summer lull, with only two national polls having been released for the month of July, surveying almost 4,700 Canadians. Due to the small number of polls last month, I will only briefly go over the monthly averages for the sake of continuity. 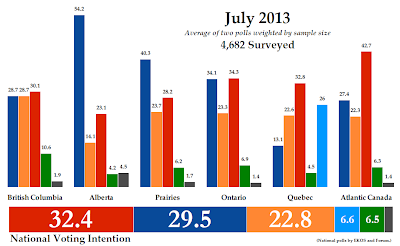 That drop for the New Democrats is actually deceptive. If we look only at the last set of polls from EKOS and Forum, the two firms in the field in July, we see that the NDP has actually gained when comparing apples to apples:

EKOS and Forum were last in the field within a 30-day period between mid-May and mid-June. A simple average of those polls shows that the Liberals have dropped 3.7 points, while the NDP was up 2.2 points and the Conservatives were up 1.5 points. 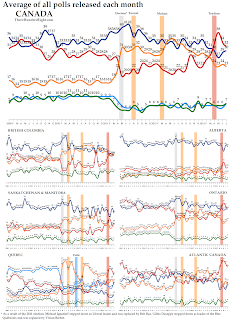 Regionally, the Liberals were narrowly ahead in British Columbia and Ontario, while they held more significant leads in Quebec and Atlantic Canada. They were second in both Alberta and the Prairies, meaning they were first or second throughout the country. They are the only party that can say that.

The Conservatives were ahead in Alberta and the Prairies, and were second in Ontario and Atlantic Canada. They were tied for second in British Columbia with the NDP, and were fourth in Quebec.

The NDP was only tied for second in British Columbia and was third in every other region of the country. That meant the Bloc had displaced the NDP for runner-up status, the first time that has happened under Thomas Mulcair's leadership.

Thanks in large part to the close race in Ontario, the Conservatives would be able to win the plurality of seats despite their deficit in support. They would win 135 seats with these numbers, up 15 from the June projection. The Liberals dropped 17 seats to 117 and the NDP dropped 30 seats to only 50. With the NDP slumping in Quebec, the Bloc manages to win most of the francophone regions of the province by default and takes 34 seats, up 32 from June. The Greens would win two, both in British Columbia.

The polling data is a little too thin to draw any significant conclusions. But it does seem that the Liberals are coming down from their highs after Justin Trudeau's leadership victory and that both the Tories and NDP are winning back some of that lost support. Nevertheless, the Liberals remain ahead and the Conservatives and NDP are still showing signs of weakness in important parts of the country. The rebound of the Bloc is not likely to be anything definitive but they may have become the 'none of the above' option that will gather support whenever the Liberals and NDP fail to impress. Whether that support would show up at the ballot box, however, is another question entirely - and the answer will be vital to the hopes of both Trudeau and Mulcair in 2015.
Posted by Éric at 9:17:00 AM