Why forecasting Quebec's Liberal seats in 2015 won't be easy

Sure enough, after La Presse put out the numbers for CROP's latest provincial poll on Wednesday, the inevitable federal Quebec numbers followed yesterday. They showed the Liberals continuing to be well ahead in the province, with the New Democrats taking a step backwards to a new low in CROP polling. The Conservatives were up significantly, but are still below where they stood on election night in 2011. 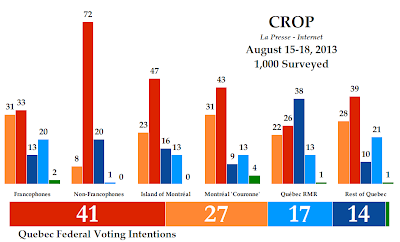 I wrote about this poll in my latest piece for The Huffington Post Canada, so rather than re-hash the numbers I suggest you head over there.

To briefly cover the shifts since CROP's last poll from mid-June, the NDP was down five points and the Conservatives were up six, while the Liberals were down an insignificant single point and the Bloc Québécois was up two.

What I'd like to discuss in detail, however, is the challenge that 2015 will pose in forecasting the seats the Liberals can win in Quebec.

Since Trudeau boosted the Liberals into first place in the province, this site has only rarely given them the number of seats one would expect with a double-digit lead. I have explained this due to the lack of a Liberal base outside of Montreal which limits the projection model's ability to move seats over to the Liberals. When the party was under 10% in a riding - which was very common - tripling their vote still only increases their support in that riding to 30% or less. That is not enough to win.

When a party goes from a very low level of support to a very high one, projection models can give wonky results. But not necessarily - despite the New Democrats surging from 12% to 43% in Quebec between the 2008 and 2011 election, the projection model was able to handle that without issue. With the right province-wide numbers plugged into it from 2011, the model would have given the NDP 60 seats (they actually won 59).

Why was the model able to do this? Because the NDP went from uniformly low support in every region of the province to uniformly high support. By my rough estimate, the NDP had between 11% and 14% support in the four regions defined by CROP in the poll above in 2008.

That uniformity continued into 2011. The New Democrats took about 38% of the vote on the island of Montreal, 47% in the surrounding suburbs, 40% in Quebec City, and 44% in the rest of the province. Across the board, support for the party tripled or quadrupled. With that sort of uniformity, the projection model had no trouble with it, particularly since support for the other parties decreased so much.

It is a completely different story for the Liberals. They had virtually no support in Quebec City in 2011, with only 7% of the vote. They did not fare much better in the regions of Quebec with 10%, but took 14% in the suburbs of Montreal and 27% of the vote on the island of Montreal itself.

What that means is with CROP's latest poll, we have the Liberals quadrupling their vote in Quebec City and the regions of Quebec and tripling it in the suburbs, but less than doubling it on the island of Montreal. That causes trouble for a swing model. With an increase from 14% to 41% province-wide, the model triples the Liberal vote everywhere. In other words, it is increasing Liberal support by too much on the island of Montreal (wasting a lot of votes for the Liberals) and not enough outside of the city and its suburbs (not giving the party enough votes).

To address this problem, I worked on the projection model to make it capable of taking into account the regional data that polling firms like CROP and Léger Marketing routinely release for the province of Quebec. Using this regional data makes a big difference.
Using only CROP's province-wide numbers, the model would give the Liberals 36 seats to 33 for the New Democrats, eight for the Conservatives, and one for the Bloc Québécois. When using their regional data, however, the Liberals are boosted to 46 seats while the New Democrats fall to 23. It means the model is able to take into account the Liberals' disproportionate growth in support outside of the Montreal area.

The variations between the two sets of projections occur throughout Quebec. For the Liberals, using province-wide data would under-estimate their seat count in the regions by 10, while over-estimating the seats the NDP could win in Quebec City (by four) and the regions (by seven).

Using the regional data, the Liberals would win 14 of 18 seats in Montreal and nine of 17 in the surrounding suburbs, while also winning 21 in the regions of Quebec. They would even win two in Quebec City (in close three-way races).

The New Democrats take 11 seats in the regions, eight in the Montreal suburbs, and only four on the island, while the Conservatives win six seats in Quebec City and two in the regions. The Bloc retains only one seat.

The conventional wisdom that the Liberal vote will be inefficient in Quebec may not be as wise as it seemed. CROP has consistently shown that the Liberals have more than a little life among francophone voters outside of Montreal, and that they do have the ability to win seats outside of their traditional bases. And if the Liberals look like a winning party in the province, they will have an easier time attracting quality candidates, making it in turn easier to win.

But the disproportionate shift in support in Quebec will make forecasting the results in the province in 2015 quite difficult. On the one hand, most polling firms do not release data this detailed for the province, meaning that swings based only on the province-wide results should under-estimate the number of seats the Liberals will win and over-estimate the number that could go to the NDP. On the other hand, projections calculated with the regional numbers from CROP and Léger Marketing, while having the potential to be more accurate, will be based on small sample sizes and so will be more prone to errors. And unlike the national numbers, where there are similarly small samples for the Prairies and Atlantic Canada, there will not be as many polls to smooth out the noisy data. CROP, for instance, did not report in the final 12 days of the campaign in 2011 and Léger only put out national numbers.

This will be something to keep an eye on. The Liberals have retreated to the cities in the last few elections, but in Quebec they are gaining support in the countryside. Regional data for other provinces, particularly Ontario and British Columbia, would be especially useful to determine whether the gains the Liberals have made are similarly disproportionately distributed. There are a number of reasons why the 2015 election is looking like a difficult one to forecast. This might be the most important one.
Posted by Éric at 9:47:00 AM