It seems like it has been ages since the last federal or provincial poll has been published, but this morning La Presse and CROP have given us something to sustain ourselves on for the next few days. The poll shows that Philippe Couillard's Quebec Liberals still remain well ahead of the pack in the province, but also that Pauline Marois and the Parti Québécois have received a boost in support. 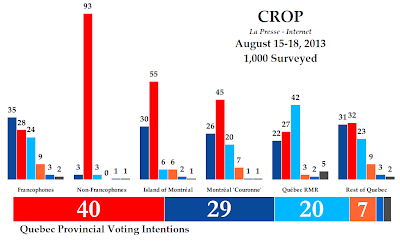 CROP was last in the field in mid-June, and since then both the PLQ and PQ have experienced a gain in support. Neither gain is outside the margin of error, however (if this was a probabilistic sample). The Liberals were up two points to 40% while the Parti Québécois was up four points to 29%, just flirting with a statistically significant boost.

The Coalition Avenir Québec fell two points to 20%, while Québec Solidaire was down four points to 7% - that drop is outside of the margin of error. Option Nationale and support for other parties was at 2% apiece, while 11% were undecided and another 6% did not give a response for one reason or another.

The PQ's gain has been attributed to the government's good handling of the Lac-Mégantic tragedy, so this boost is somewhat expected. But it is interesting how the numbers have improved across the board on other measures for the PQ: satisfaction was up six points to 34%, Marois was up eight points on who would make the best premier to 19%, and support for sovereignty was up six points to 40%, the highest it has been in some time.

Nevertheless, the Liberals remain in control. Couillard had 26% on the premier question, unchanged from June, and they were ahead in every region of the province except Quebec City.

The Liberals had 93% support among non-francophones and 28% among francophones. They were up nine points to 51% in the Montreal region - and more specifically led with 55% on the island of Montreal and 45% (a gain of 12 points) in the surrounding suburbs. They were narrowly up on the PQ in the regions of Quebec with 32%, but fell 13 points in and around Quebec City to 27%. That is below even their 2012 election total.

The PQ was up five points among francophones to 35%, but experienced no other significant boosts in support. They were up on the island of Montreal to 30%, in Quebec City to 22%, and in the regions to 31%, however, while they dropped in the suburbs of Montreal to 26%.

The CAQ was down throughout the province except around Quebec City. It means this is a bad poll for the CAQ, which makes it difficult to believe that François Legault is in any hurry to help Couillard bring down the government. The party was down to 24% among francophones and only 3% among non-francophones, has dropped six points in the Montreal RMR to 12%, and was down to 6% on the island and 20% in the suburbs. The party was down to 23% in the regions, but did experience an 11-point gain to lead in Quebec City with 42%. Legault was down only one point to 16% on the premier question, though that did put him behind Marois.

Québec Solidaire seems to have suffered the most at the hands of the PQ, as they were down to only 6% on the island of Montreal. That is their main region of support, and it puts both of their seats at risk. Option Nationale seems to be dropping back due to Jean-Martin Aussant's resignation, though it appears CROP kept his name in the survey.

In terms of seats, the disproportionate concentration of support for the Liberals in and around Montreal means they do not win the kind of majority one would expect with an 11-point lead. Instead, they barely squeak by with 63 seats, 39 of them in the Montreal region.

The Parti Québécois drops to 48 seats, while the CAQ is reduced to 14. Québec Solidaire is shut out, due to the PQ's relatively stronger showing on the island of Montreal.

It is possible that with such a large lead, the PLQ would be able to pull a few more seats out of these numbers than the 63 they are given here. But the Liberals have traditionally had a less efficient vote due to their weakness among the francophone electorate, which is consistent with this poll. The CAQ seems to be stuck at around 20%, quite a bit lower than they 27% the party took in 2012.

For Pauline Marois and the Parti Québécois, these numbers are heading in the right direction but the party is still badly positioned to face voters. A government under 30% is in a very sorry state, particularly when the main opposition party is ahead by double-digits. It seems that the CAQ, despite its lacklustre performance, is set on bringing down the government in the spring. One would expect the PLQ to come down a little from their current honeymoon, and that should benefit Legault more than Marois. But Couillard's numbers are improving, not retreating. How the numbers move this fall will be interesting to watch.
Posted by Éric at 10:40:00 AM