A new survey out last night, conducted by Ipsos Reid for CTV News, shows the Liberals holding a wide lead over the Conservatives, who have been unable to get their numbers to move over the last few months.

A few housekeeping items before getting into the poll: "Tapping into the Pulse" is finished and is going through the final stages of being readied for publication. Kickstarter backers will be getting it next week, while those who have pre-ordered will be getting a 'sneak preview' of the first three chapters. The eBook will be put for sale to the general public at the end of March. You can pre-order here. Also, if you aren't already, you might want to follow me on Twitter. It is the best place to be notified of site updates, along with alerts about new polls. 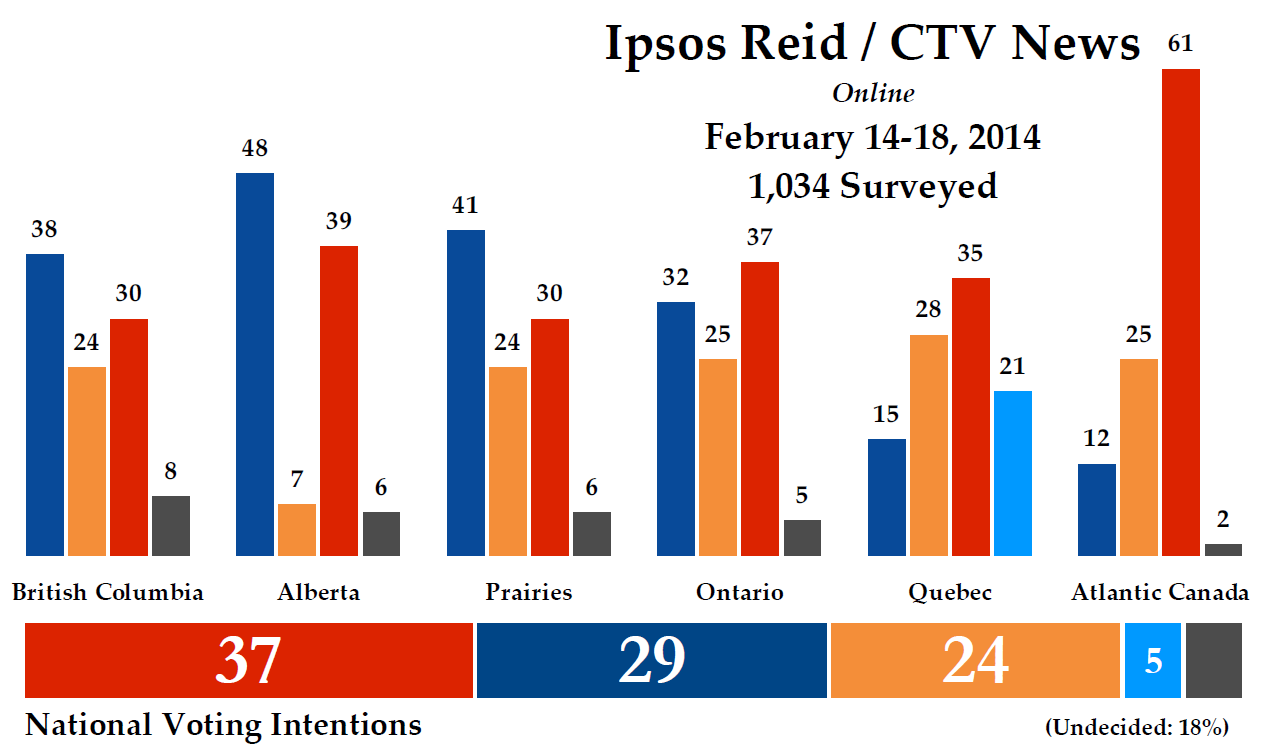 Ipsos Reid was last in the field for CTV News on Jan. 31-Feb. 4, and has shown no real significant movement in support since then. But the Liberals are up four points to 37%, followed by the Conservatives at 29%.

The Tories have been registered 29% support in three consecutive polls by Ipsos now, suggesting they are having trouble getting the numbers to move in their favour.

The New Democrats were down three points to 24%, while the Bloc Québécois was down two points to 5%. Support for other parties, including the Greens, was up one point to 5%. Undecideds numbered 18% of the sample, up three points.

Among those most likely to vote, the Liberals dropped three points to 35%. The Conservatives were up three points to 31%, while the NDP was down one point to 24%. None of these shifts appear statistically significant.

The Liberals led by four points among men and 12 points among women, while they were ahead among all age groups (though the margin over the Tories shrank to two points among voters 55 and older).

According to the poll, Canadians gave the budget a bit of a yawn. Though 47% said they approved of how the Conservatives have handled the economy (just 7% strongly approved), fully 71% said the budget was "neither good nor bad and you'd symbolically just shrug your shoulders". That included 67% of Conservative supporters, though without a "don't know" option a lot of these people would likely be those who knew nothing about the budget to begin with. One in five said the budget was bad, while just 9% said it was good.

The Liberals increased their support to 37% in Ontario, while the Conservatives dropped to 32% and the NDP fell to 25%.

The Conservatives jumped ahead to 38% support in British Columbia, while the Liberals dropped for the third consecutive time in Ipsos's polling (going back to the end of November) to 30%. The NDP was down to 24%, while support for other parties, primarily the Greens, was at 8%. That was the highest 'other' result in Canada.

The Liberals led with 61% support in Atlantic Canada, the highest number registered anywhere in the country by any party, while the NDP was up 13 points to 25% in the region. The Conservatives dropped to just 12%, representing a 15-point decrease since the end of November.

In the Prairies, the Conservatives were up to 41%, followed by the Liberals at 30% (down in three consecutive Ipsos polls), and the NDP at 24%.

Alberta was a bit of an odd one. The Conservatives were up slightly to 48%, but the Liberals increased by 15 points to 39%, a huge number for them and their third consecutive gain in Alberta in Ipsos's polling. The New Democrats were down 16 points to just 7% in the province.

What is going on in Alberta? The chart below shows all the polls released for the province since April 2013. 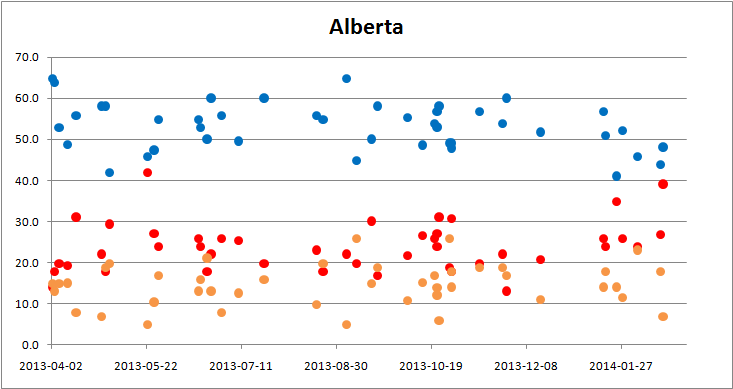 As you can see, the Conservatives have been polling under 50% in Alberta in four recent polls. This has happened on several occasions in the past, but not usually coinciding with such high Liberal numbers. They have been over 30% twice recently, while before the party had only marginally gotten over the 30% mark in April and in September-October (aside from one anomalous poll where they were over 40% in May).

Is this just a wobble, or are the Liberals making real gains in Alberta? We'll have to see what subsequent polling shows. But with two by-elections pending in the province, these may be numbers worth keeping an eye on.

Especially since, with a margin of just nine points between the Conservatives and Liberals in the province, Alberta becomes a battleground province. At these levels of support, the Liberals would be able to take 10 seats away from the Conservatives - and often by comfortable margins. In fact, a handful of other seats in Alberta would be held by the Tories by relatively narrow margins. It is hard to believe, but that is what would happen if Alberta became competitive like this.

Overall, the numbers in the Ipsos poll would likely give the Liberals 139 seats to 126 for the Conservatives, 66 for the New Democrats, five for the Bloc Québécois, and two for the Greens.

Despite holding an eight-point lead, the Liberals are severely penalized by trailing in British Columbia and having only a five-point edge in Ontario, while the New Democrats can still win a plurality of seats in Quebec.

Apart from the interesting numbers in Alberta, it seems that federal voting intentions remain generally where they have been since April 2013. For the Liberals, whose convention begins in Montreal today, that is good news. But for the Conservatives and New Democrats, something has got to give for them to knock the numbers loose again.
Posted by Éric at 10:35:00 AM