With Cotler's departure, is Mount Royal at play?

This week, Irwin Cotler announced that he would not seek re-election in 2015. That leaves his riding of Mount Royal up for grabs, as the Liberals will need to name a new candidate and will not be able to benefit from an incumbency advantage. Could this create an opportunity for the Conservatives to win their first seat on the island of Montreal in decades?

The riding has traditionally been a very safe one for the Liberals, and was represented by Pierre Trudeau when he was in office. It was a rare thing for the Liberals to not win a majority of votes in the riding, and Cotler first won it in a by-election in 1999 with an incredible 92% of the vote. However, his vote share dropped in every subsequent election, to 81% in 2000, 76% in 2004, 66% in 2006, 56% in 2008, and finally 41% in 2011.
He almost lost the riding in that election to Conservative candidate Saulie Zajdel, who captured 36% of the vote. The Conservatives had been increasing their vote share in every election since the merger, taking 9% in 2004, 18% in 2006, and 27% in 2008. As the chart above shows (the Canadian Alliance and PC votes were combined for 2000), the trendlines would point to an easy Conservative victory in 2015 if the Liberal vote continues to slide and the Conservative vote continues to increase.

(If it did, it would probably have to be under a Conservative candidate other than Zajdel, who was arrested and charged with fraud in June 2013.)

But the 2011 election was a bit of an outlier, considering it marked a historical low for the Liberal Party. If we apply current levels of support in Quebec to the riding (36% for the Liberals to 13% for the Conservatives), and take into account the effect of losing an incumbent candidate, the Liberals should easily prevail with 67% of the vote to just 20% for the Conservatives. With the Liberals enjoying a surge of support under Justin Trudeau, Mount Royal should not be at play. In fact, Mount Royal would drop quite low on the list of potential Tory pick-ups in the province.

However, that relies on the swing in support at the provincial level. Can we get a little more detailed than that?

Thankfully, CROP has been releasing federal polling data for the riding of Montreal over the last year. The trends have been recorded in the chart below, using a two-poll average. 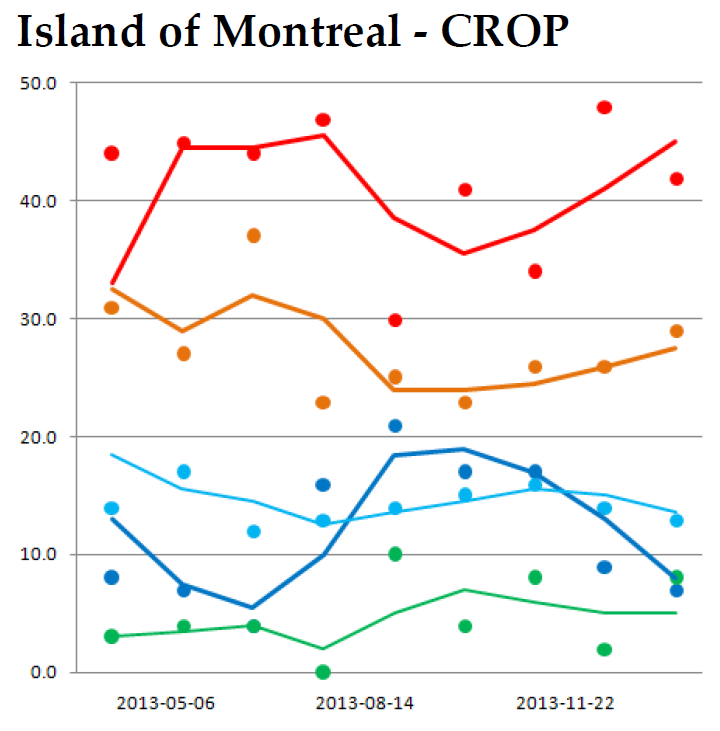 The Conservatives have fluctuated quite a bit. They took 13.3% of the vote on the island of Montreal in 2011, and have polled both well above and well below that level over the course of the year. But on average, they have only managed 12% - virtually unchanged from where they were on election night. By contrast, the Liberals have averaged 42% support on the island of Montreal since Trudeau took over as leader.

Again, that makes Mount Royal a very safe riding for the Liberal Party. A simple uniform swing would give the Liberals 56% of the vote to 35% for the Tories. But what would be needed for the Conservatives to be in a real position to take it?

Because of the narrow margin in 2011, it would not take very much. With Cotler's incumbency advantage gone, the Conservatives could theoretically win the riding at 13.8% support on the island of Montreal, if the Liberals had fallen to 26.7%. That would require, however, a very steep drop in Liberal support between now and the 2015 election. That could very well happen, but it is difficult to imagine a scenario in which Trudeau does worse than Michael Ignatieff in Quebec. There are lower fruit for the Conservatives to pick in Quebec than Mount Royal, particularly ridings currently held by the New Democrats and Bloc Québécois.

Of course, the landscape could completely transform between now and the 2015 election. A meteorite could also land on Mount Royal and make these calculations irrelevant. But we are better off focusing on the probable rather than the possible. Based on the information we have, Mount Royal does not look like a seat that should be high on anyone's list of swing ridings in 2015.
Posted by Éric at 11:05:00 AM