Newfoundland and Labrador may be a small province, but it manages its fair share of drama with Kathy Dunderdale resigning as premier last month. That drama continued today, as news reports say the two NDP MHAs that left the party late last year will be heading over to Dwight Ball's Liberals. With defections going their way from the governing Tories as well, the Liberal caucus will balloon to 11 members, almost double the number of seats won in the 2011 provincial election.

Despite all the upheaval, however, the latest poll from Abacus Data for VOCM shows that little has changed in the province since before the holidays, with the Liberals still enjoying a wide lead over the Progressive Conservatives. 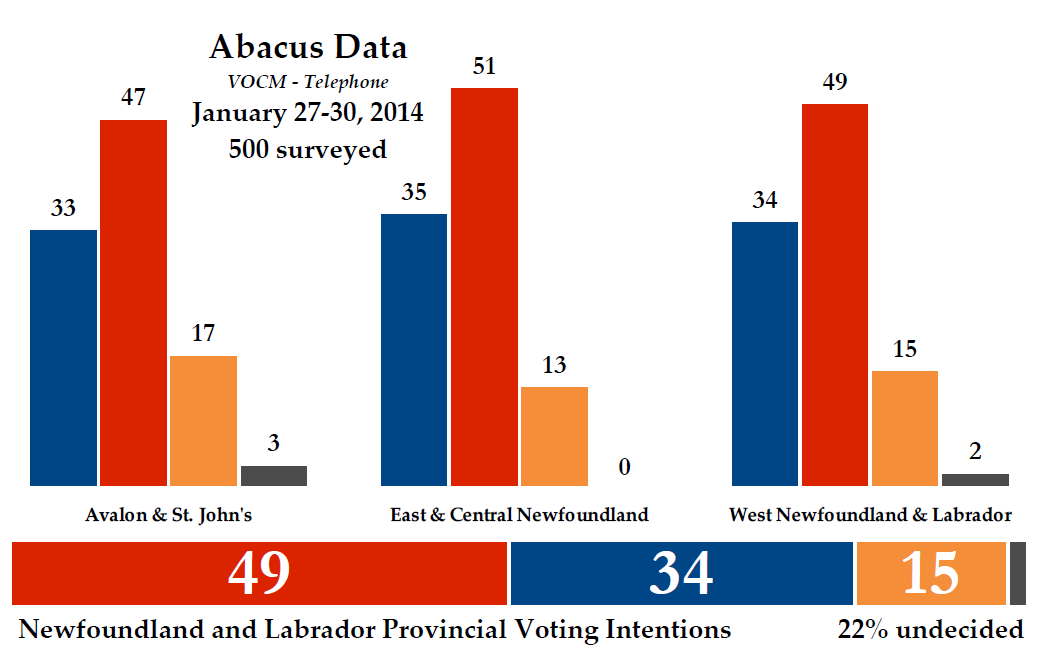 This is the first we've heard from Abacus at the provincial level, but their numbers show no real change from those reported by the Corporate Research Associates in November. Abacus found the Liberals leading with 49%, followed by the PCs at 34% and the NDP at 15%, with 2% of Newfoundlanders and Labradorians opting for another party.

22% of the entire sample was undecided. Interestingly, 24% of 2011 PC voters were undecided, suggesting that they are particularly unsure of where to go after Dunderdale's departure (15% of NDP voters in 2011 were undecided, and just 9% of Liberals). This suggests that the Tories do have some scope for growth among voters who have supported them in the past, but they have taken a big step backwards. Before excluding undecideds, 28% of PC voters from 2011 have already gone over to the Liberals (31% of NDP voters have as well).

The Liberals led among both sexes and in all age groups, but it is worth noting that among the oldest voters (60+, often a good proxy for turnout) the margin was closer: 49% for the Liberals and 40% for the Tories, with the NDP at just 10%.

It is also worth noting that support is remarkably uniform across the three regions defined by Abacus (it would have been interesting to have some numbers for St. John's, where support is less likely to be so uniform). The Liberals had 47% support on the Avalon Peninsula and in the St. John's Region, 49% in western Newfoundland and in Labrador, and 51% in eastern and central Newfoundland. The Tories varied even less, with a high of 35% in the eastern and central parts of the province and a low of 33% in Avalon and St. John's. The NDP had its best numbers, 17%, in Avalon and St. John's - likely due to much better numbers in the provincial capital.

With these provincial levels of support, the Liberals would likely win a majority government of around 26 seats, with 18 going to the Progressive Conservatives and just four to the New Democrats. Considering the uniformity of Liberal support, I'd wager a higher likelihood of even more seats than this for the party than otherwise.

The province will be one to watch as contenders position themselves to replace Dunderdale as the permanent leader of the PCs. This man or woman will also serve as premier for no more than one year, when an election needs to be called. The Tories still have a strong base of support from which to build upon (in fact, considering how unhappy Newfoundlanders and Labradorians were with the blackout, it is remarkable the Tories have held on to as much support as they have), but it seems that Dunderdale herself was not the only problem. While Abacus did record PC support at five points higher than CRA did in November, the difference is within the two polls' margins of error. We will have to see whether a new leader will improve Tory fortunes, or whether voters have simply deemed it time for a change.
Posted by Éric at 9:36:00 AM