Only one national poll had been conducted for the month of December, but in January there were four, in addition to one survey done entirely in Quebec. If we compare January's numbers to the last month with some decent polling, in November, we see that not much has changed - though the Liberals and New Democrats swapped about a point.

I finished writing "Tapping into the Pulse" yesterday, and I am going through the final revisions. Then the book will go through the process of being turned into a readable ebook! I hope you'll find it interesting. I have certainly enjoyed writing it. If you haven't already, please consider putting in a pre-order to reserve your copy. You'll get a sneak peek of the first three chapters when the book is released to the Kickstarter backers on or before February 28! 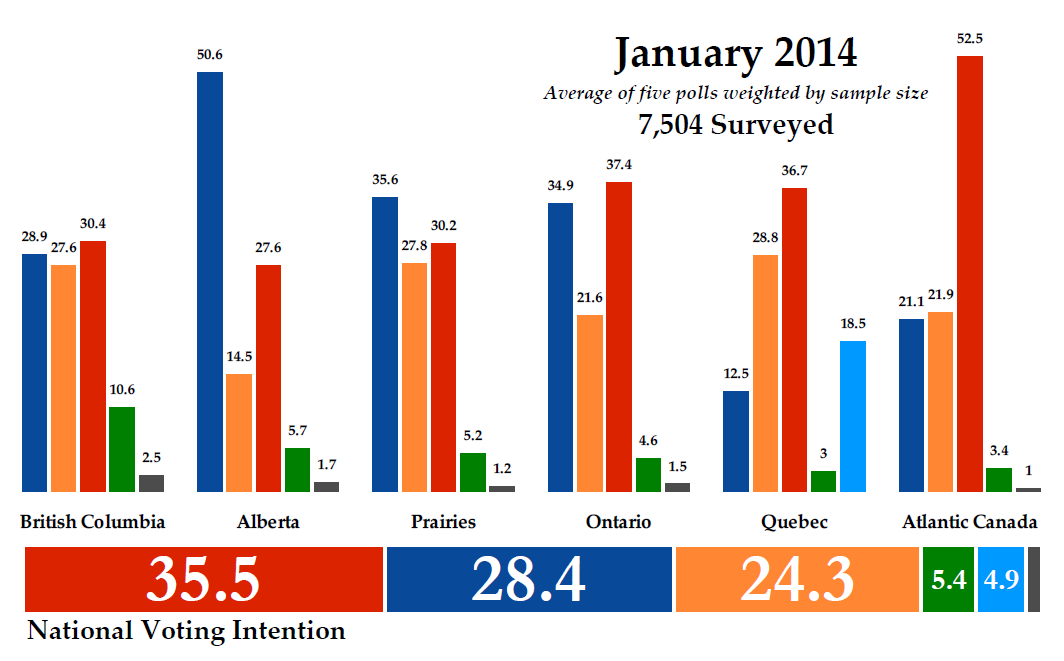 The Liberals averaged 35.5% support in January, down one point from their average support in November. The Conservatives, who stopped a three month decline in January, averaged 28.4%, a gain of 0.5 points. The New Democrats were up 0.9 points to 24.3%.

Comparing the four national polls conducted in January to the last time these firms were active within a similar window, we see the New Democrats have made a significant gain from a particular low level.

Compared to polling by the same firms done at the end of October, the New Democrats were up 2.6 points. The Liberals dropped 1.4 points and the Conservatives fell 0.6 points.

At the regional levels, the Liberals continued to lead in British Columbia, Ontario, Quebec, and Atlantic Canada, with the Conservatives ahead in Alberta and the Prairies.

With these levels of support, the Liberals would win 136 seats, down six from their November estimate. The Conservatives would win 120 seats, up three, while the NDP would take 78, up 10. The Bloc dropped eight seats to two and the Greens gained one to reach two as well

The Liberals dropped most of their seats in Ontario, falling seven to 53. They were also down two seats in both the Prairies and Quebec. But they were up two seats in Alberta and three in Atlantic Canada.

The Conservative seat gains were in Ontario, where they picked up eight. They were also up one in British Columbia, though they were down one in the Prairies, two in Alberta, and three in Atlantic Canada.

The New Democrats gained 10 seats in Quebec and three in the Prairies, while dropping one in Ontario and two in British Columbia.

January showed a continuation of what we had seen in 2013. The Liberals retain the lead, which they have held now since April 2013. The Conservatives remain below 30% and the NDP is stuck in third. There are some interesting regional contests, though, with a three-way race persisting in British Columbia and Ontario and Quebec hardly decided.
Posted by Éric at 10:17:00 AM