Bloc falls in Quebec as Liberals move ahead

After a long drought of polls, two new ones were released yesterday. One, by Forum Research for the Toronto Star, I looked at for The Huffington Post Canada. The other, by CROP for La Presse, is the one we'll focus on here. And it is an interesting one. 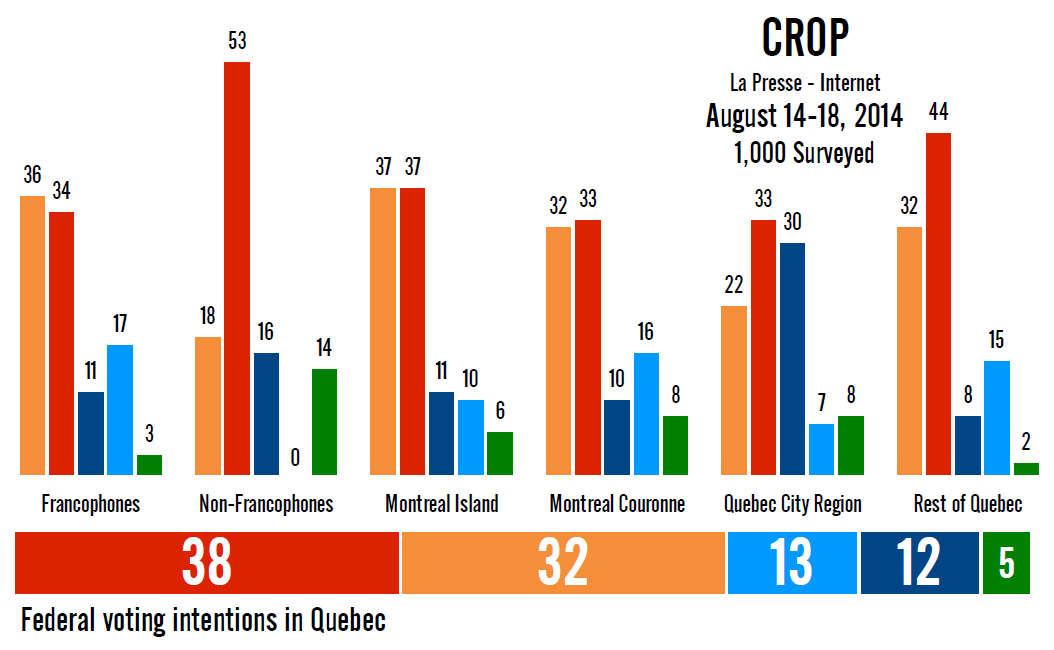 The latest missive from CROP pegs Liberal support to stand at 38% in Quebec, up six points from CROP's last poll of June 12-16. That has moved them into first place, ahead of the New Democrats who were down three points to 32%.

The Bloc Québécois, in the midst of internal turmoil as Jean-François Fortin leaves the party and Claude Patry confirms he will not run for re-election in 2015, dropped five points to just 13%.

Though Nanos Research has had the Bloc below 13% on several occasions over the last few years, this is the lowest a Quebec-based polling firm has put the Bloc in recent memory. In all likelihood, this is the lowest the party has ever been since it was founded in 1990. What is the opposite of a honeymoon? Whatever it is, that is what new leader Mario Beaulieu is experiencing.

The poll asked Quebecers whether they felt the Bloc was still pertinent, and 65% of them said it wasn't. But worse is that 44% of sovereigntists agreed. Considering that Beaulieu has opted to focus on independence above all else, that is a crushing rebuke from the very people he is supposed to be firing up. More respondents said they would consider voting for the Bloc if it reverted to its traditional role of defending Quebec's interests.

The Bloc's drop of five points is outside the margin of error (or would be if this was a probabilistic sample) and is part of a recent trend of Bloc weakness. Of the eight polls conducted since Beaulieu won the leadership race, the party has been pegged under 20% in all but one of them. Prior to that, we have to go back 23 polls (to January) to find seven that has the party that low.

Perhaps most embarrassingly for the Bloc, which has run in the past on being able to 'block' the Conservatives, the party was just one point up on the Tories in Quebec. They were at 12%, up two points, while the Greens were at 5%, up one.

The Bloc's support among francophones dropped dramatically, down six points to just 17%. The Liberals were the beneficiaries, up 10 points to 34%. That helped them close the gap on the New Democrats, who were in front at 36%.

Among non-francophones, the Liberals led with 53%, followed by the NDP at 18% and the Conservatives at 16%. That was double their standing in June, however. The Greens were also up big, by nine points to 14%.

On the island of Montreal, the race was tied at 37% apiece for the Liberals and NDP, representing a 14-point gain for the latter. The Conservatives were third at 11%.

In the suburbs around the island, the race was also close: 33% for the Liberals vs. 32% for the NDP. The Bloc was third here with 16%.

The Liberals made a big jump in Quebec City, gaining 14 points to lead with 33%. The Conservatives dropped to 30%, while the NDP was down 15 points to 22% in the provincial capital.

In terms of seats, the province-wide model gives the New Democrats 46, with 27 going to the Liberals and five to the Conservatives (the Bloc Québécois would be shutout). But, as I've discussed before, province-wide models in Quebec may not do the job well as the Liberals have gained support disproportionately outside of Montreal. Taking that into account, there are another eight seats that could fall to them instead of the NDP, narrowing the gap to 38 seats for the NDP and 35 for the Liberals.

On who would make the best prime minister, Justin Trudeau saw a four-point jump to lead with 31%, followed by Thomas Mulcair at 26%. That was a drop of five points. Stephen Harper was at 10%, while Beaulieu tied Elizabeth May at just 2%. By comparison, André Bellavance averaged 3.4% during his interim tenure, and Daniel Paillé averaged 4.3%. Back between 2007 and 2009, Gilles Duceppe averaged just under 20% in polls by Nanos.

The question that will only be answered in the coming weeks and months is whether this is a blip for the Bloc or the first sign that the party will not be able to hold on to any seats in 2015, which would be the final nail in the party's coffin. The Bloc was not en route to a triumphant return under Paillé, but he did have enough support to hold his seats and perhaps win a handful more due to vote splits. Under Beaulieu, it seems that the Bloc may not be able to hold onto the majority of its seats even before the election begins. One would expect the NDP, the party that benefited from the Bloc's downfall in 2011, to take advantage. But CROP, at this stage, gives the nod to the Liberals. Will that hold?
Posted by Éric at 9:49:00 AM