Both Ipsos Reid and Abacus Data reported new national polling numbers yesterday, and both showed the Liberals leading the Conservatives by six or seven points. The results corroborate some of the other recent numbers we have seen. These suggest that the Liberals have rebounded, at the expense of the Conservatives, from what looked like a slump-in-the-making at the end of the spring. 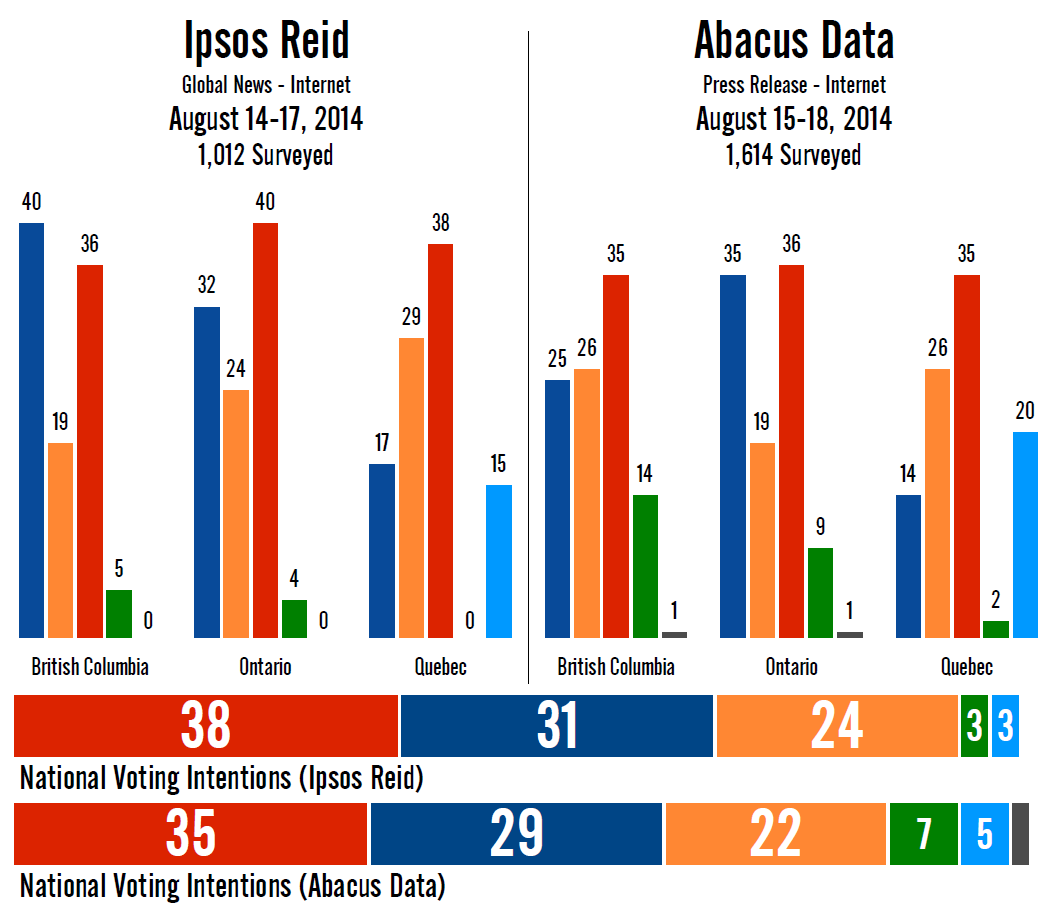 The Ipsos Reid poll, conducted for Global News, was the first we have heard from the company at the federal level since April 17-22. Since then, the Liberals were up five points to 38% support, a jump that is outside the margin of error of a probabilistic sample of similar size.

The Conservatives were down two points to 31%, while the New Democrats were unchanged at 24%.

The Greens and Bloc Québécois had 3% apiece.

Abacus Data's last poll was conducted June 25-July 3. They have not recorded any major shifts since then, but the Liberals were up one point to 35%, followed by the Conservatives at 29% (down two points) and the NDP at 22% (up one point).

The Greens stood at 7% support, while the Bloc was at 5%.

Both pollsters recorded similar gender breakdowns. The Liberals were up by two points among men in the Abacus poll. The margin was four points according to Ipsos. Among women, both firms put the gap at 10 points between the Liberals and Conservatives.

I've highlighted above the three largest regions, but only in Quebec do the numbers look very close. There, both polls have the Liberals ahead of the NDP (echoing the results of the latest big-sample CROP poll) with the Bloc Québécois well behind.

But if we take into account the margins of error (practically speaking, if not theoretically speaking since these are not probabilistic samples) we see that the disparities are really not so significant.

The chart below shows, simply calculated, where the two polls overlap for each of the parties. It gives a good indication of where things stand in each region. 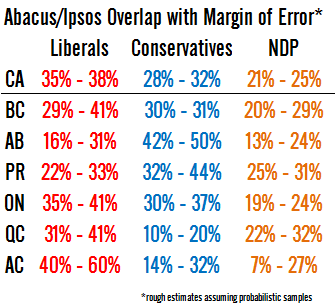 Nationally, the Liberals are somewhere between 35% and 38%, while the Conservatives are clearly in second with between 28% and 32%. The NDP is in third with between 21% and 25%.

The Liberals are probably leading in British Columbia, where they are mostly ahead when taking into account the overlap. The NDP is probably in third, but overall the race is close.

The Conservatives are comfortably in the lead in Alberta, but are well off their historical pace. They are also probably in the lead in the Prairies, but it is interesting that at the low end of the Tories' range and the high end of the range for the Liberals and NDP, the three parties are tied. 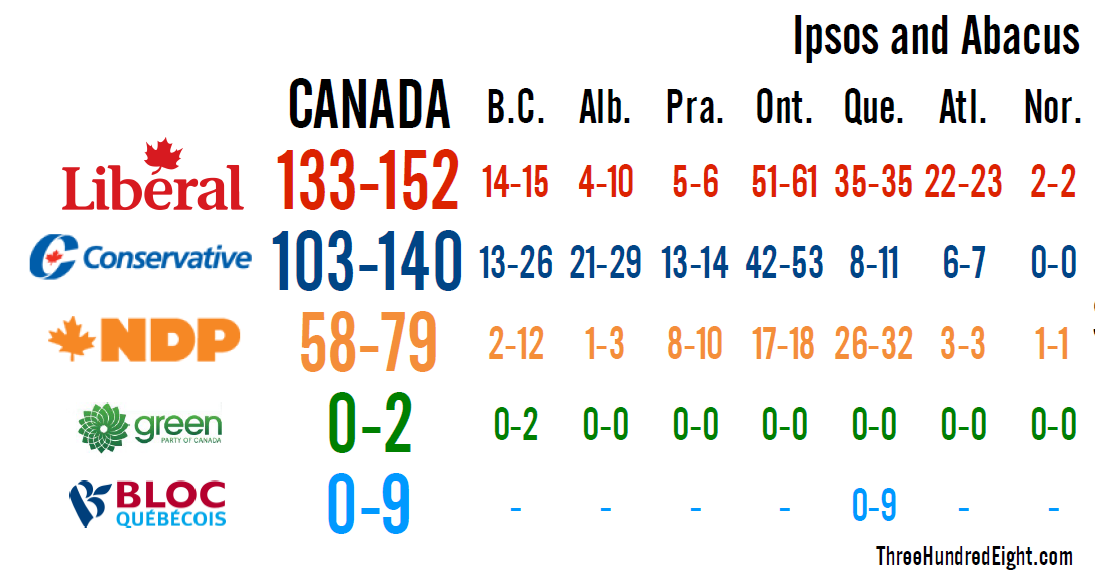 The Ipsos and Abacus polls would result in very different national scenarios in terms of seats. The Ipsos poll would give the Liberals 150 seats to 121 for the Conservatives and 67 for the NDP - enough to give the Liberals a comfortable minority government.

The Abacus poll is far closer, however, with 135 seats for the Liberals, 122 for the Conservatives, and 70 for the NDP.

If we combine the two results, taking the best and worst numbers in each of the regions, the Conservatives could conceivably come out ahead in the seat count with 140 to 133 for the Liberals. That would be on the margins of what is likely, just as a far larger Liberal victory of 152 seats to 103 for the Tories would be. But with these kinds of numbers, there is a great deal of scope for variation in the seat count. The Liberals need to be over the 40% mark to be in a good position to win a majority government.

The numbers above do give an indication of where the battlegrounds will be. For the Conservatives, much depends on their results in British Columbia and Ontario. For the NDP, it is Quebec and B.C. that are most important, while Ontario will probably make or break the election for the Liberals (I'd throw Quebec into that as well, but the Ipsos and Abacus polls were consistent there for the party).

Also of note is Alberta. With the Conservatives dropping significantly in the province to around 50%, it opens up the potential for a number of seats in Edmonton and Calgary to go to either the Liberals or NDP. It likely won't determine the fate of the government, but the eight-seat range for the Tories above could turn out to be very important. Admittedly, however, if the Conservatives are reduced to 21 seats in Alberta they are likely not doing very well in the rest of the country.

The only pollster that has been very active in 2014 that we have yet to hear from this summer is Angus Reid Global. As Angus Reid has had the race far closer than anyone else has, it will be interesting to see if they will change their tune or continue to set themselves apart from the pack.
Posted by Éric at 9:51:00 AM