As the next provincial election in Newfoundland and Labrador will occur within 12 months of the Progressive Conservatives finding someone willing to take on the job, the province might be the next to go to the polls after New Brunswick in September. The latest survey from Abacus Data for VOCM suggests that the Liberals are well positioned to win when that vote comes. 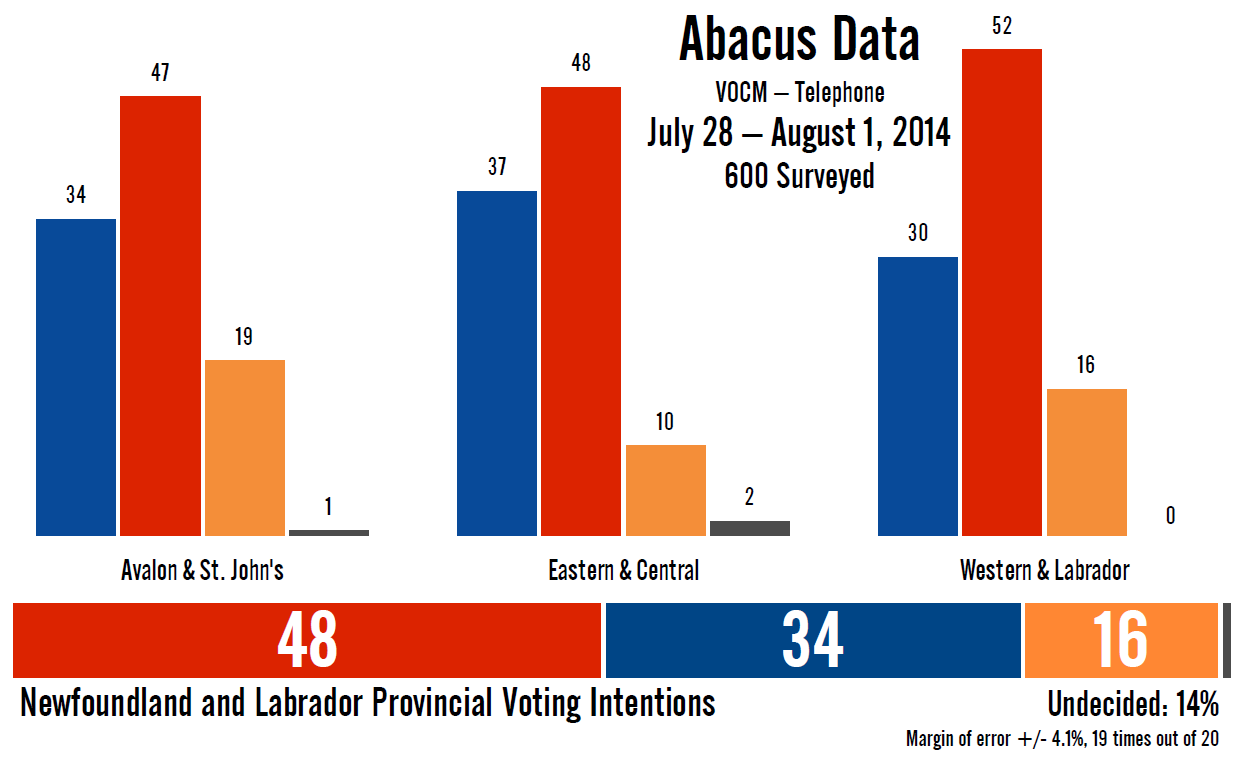 The Liberals led in the poll with 48% support, down one point from when Abacus was last in the field at the end of January. The Progressive Conservatives were unchanged at 34%, while the New Democrats were up one point to 16% support.

Voting intentions look rock solid on the Rock, as they have hardly budged since last fall, and these numbers from Abacus are well within the ballpark of the Corporate Research Associates' last two polls.

The poll reveals that roughly one-third of people who voted for the Tories and New Democrats in 2011 have gone over to the Liberals, and among Newfoundlanders and Labradorians over the age of 60 the Liberal edge extends to 57% to 29% for the Tories.

The Liberals should be able to win about 26 seats with these numbers, with the Tories taking 17 and the New Democrats winning five. But even these numbers flatter the two other parties, as the Liberals have made serious inroads in Avalon and St. John's, regions where the party took a tiny portion of the vote in 2011.

If an election were to be held tomorrow, everything would point to a big Liberal victory. All of the fundamentals are in their favour. Fully two-thirds of Newfoundlanders and Labradorians say they would consider voting for the party, whereas the ceiling for the Tories stands at 52% and that of the NDP at just 39%. This shows just how far the NDP has fallen. Between mid-2012 and mid-2013, the party actually had around 35% to 40% support. Now, that portion of voters will go no further than consider the NDP as an option.

The most lopsided result for the Liberals, though, was among those who considered government accountability and leadership to be the top issue. The party was the choice of 48% of the 10% of respondents who had selected this as their major concern, followed by the PCs at just 13%. The governing party has taken a huge credibility hit, even if it is still relatively competitive on the question of the economy.

Abacus says there will be leadership numbers out tomorrow. Dwight Ball has polled very well in other surveys by CRA and Angus Reid, so we should expect to see something similar in the next report. What would be interesting would be some figures on the PC leadership race, one of the oddest races in recent memory considering that we are now in Round 2 with a whole new cast of characters.

It could be a close race. Paul Davis has 12 caucus supporters to date, according to the current Wikipedia tally, with a combined total of 24 election wins under their belts, while John Ottenheimer has seven supporters with 16 election wins and Steve Kent has six MHAs with 13 wins altogether.

But will any of them be able to knock Ball from the lead? Maybe we'll get a clue tomorrow, but for now it looks like the next election will be the Liberals' to lose.
Posted by Éric at 9:39:00 AM