Update on Election Night: Answer? Yes. The Conservatives took a hit in their vote share more or less in line with how they have performed in past by-elections, but nevertheless put up some decent and respectable results with (at time of writing, with still some votes to be counted) 63% in Yellowhead and 49% in Whitby-Oshawa. They also won both ridings, which in first-past-the-post is all that matters.

The Liberals had a good night in terms of vote share increase, jumping to 41% in Whitby-Oshawa (almost tripling their share) and 20% in Yellowhead (increasing it more than sixfold). But they still came up short. The Liberals will do well in 2015 if they can replicate these kinds of swings, but will not go very far if they just replicate these close losses instead.

The New Democrats had a bad night in Whitby-Oshawa, dropping to just 8%. They held their own in Yellowhead, however, with 10%. But the party's future prosperity lies not in rural Alberta, but in seat-rich Ontario. The drop of more than half of their vote share in Whitby-Oshawa is not a promising sign. But these are still just by-elections, when a two-horse race can have a stronger influence on strategic voting than might be the case in a general election. Nevertheless, little silver lining to be had for the NDP.

In terms of the polls, Forum should have quit when it was ahead. The polls of November 11 that I wrote about below were quite close, but their election eve polling of November 16 was worse. And in the case of Yellowhead, much worse.

The Conservatives have put up poor results in byelections since winning a majority government in 2011, and will again be put to the test in two contests in Ontario and Alberta on Monday. Will they be able to hold on to their two seats?

You can read the rest of the piece on CBC.ca. It goes over some of the regional-level polling Alberta and Ontario, the by-election record of the major parties since 2011, and how the Conservative government's record stacks up.

Let's briefly here go over the by-election polls that were out this morning. They were conducted by Forum Research, and we all know how hit or miss their by-election polling has been in the past. One thing to take into consideration, however, is that Forum's by-election record is actually not too bad in the GTA, where the Whitby-Oshawa by-election is being held. Their notable misses took place in Alberta, Manitoba, and elsewhere in Ontario. We'll see if that trend continues on Monday. 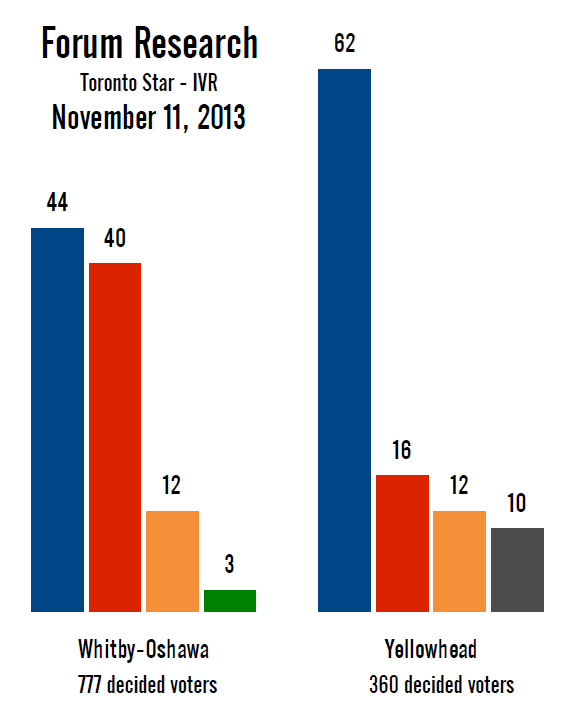 Forum now has it as a close race in Whitby-Oshawa, with Pat Perkins of the Conservatives at 44% and Celina Caesar-Chavannes at 40%. That represents a narrowing of the gap, as Perkins does pick up three points while Caesar-Chavannes picks up eight compared to Forum's poll of October 27. The NDP's Trish McAulife is down three points to 12%.

That it has become a close race is a little bit of a surprise. The Flaherty legacy is strong in the riding. So, we should take these results with a little caution. When Forum has been off in the past, often it was an over-estimation of the challenger's support. So that would suggest Perkins has more of an edge than the poll indicates.

In Yellowhead, we get our first poll of the campaign. Jim Eglinski of the Conservatives was well ahead with 62%, followed by 16% for the Liberals and 12% for the NDP. These are intuitive numbers at the very least.

Unless Whitby-Oshawa flips, the thing I will be looking for on Monday is whether the Conservatives continue to take a significant hit in these by-elections to the benefit of the Liberals, continuing to corroborate what the polls are showing to be the case at a wider level.
Posted by Éric at 11:16:00 AM