More dramatic swings in store in Newfoundland and Labrador?

Two by-elections are being held today in Newfoundland and Labrador in the ridings of Trinity-Bay de Verde and Humber East. Both were won with massive margins by the governing Progressive Conservatives in 2011. So, of course, that means both could very well swing over to the Liberals tonight.

Politics in Newfoundland and Labrador have been in a remarkable state of transition since Dwight Ball took over the Liberal Party in November 2013 and Kathy Dunderdale resigned in January 2014. The Liberals won only six seats in 2011, but after a series of floor-crossings and by-election victories their caucus has more than doubled to 14. The party has won five straight by-elections, including the last four in which the Tories were the incumbents. Their largest victory occurred just a few weeks ago, when they won the by-election in Conception Bay South by 1.8 points, after trailing by 62.5 points in 2011.

No seat in Newfoundland and Labrador can thus be considered a safe one for the Tories. But will the party finally be able to break the Liberals' streak tonight? 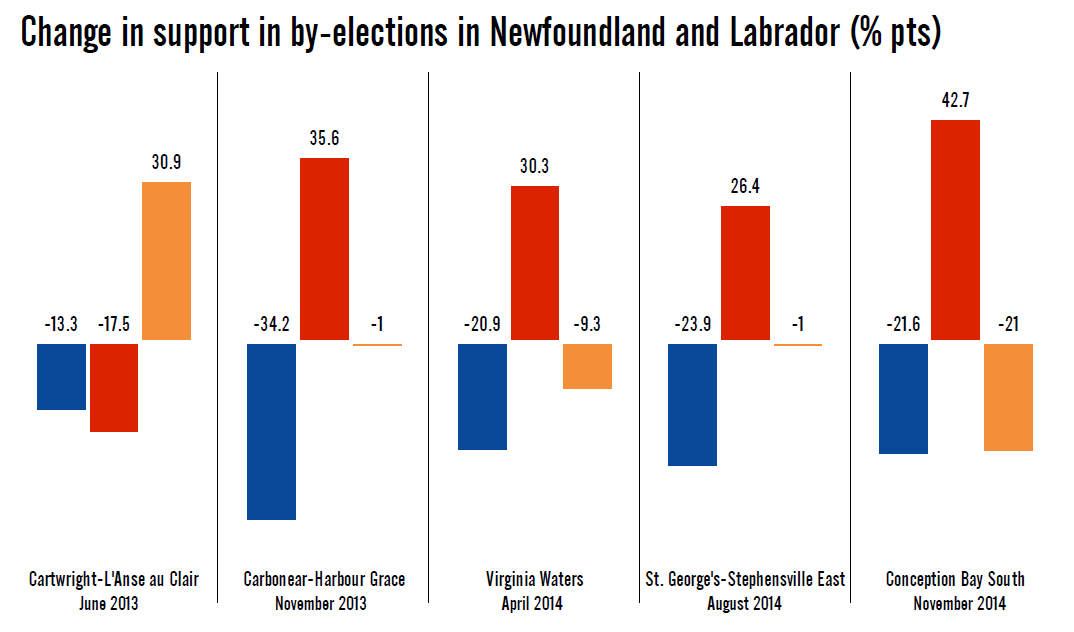 The chart above shows how support has shifted in the five by-elections that have been held since the 2011 general election. The first, in Cartwright-L'Anse au Clair, was held before Ball became party leader (the Liberals nevertheless held on).

In every by-election since then, the Liberals have gained at least 26 points, picking up almost 43 in the by-election held in Conception Bay South. The Tories have lost between 21 and 34 points in each of the last four contests, while the NDP has lost either a little (one point in both Carbonear-Harbour Grace and St. George's-Stephensville East) or a lot (more than nine in Virginia Waters, 21 in Conception Bay South).

On average, the Liberals have gained 23.5 points in by-elections held since the last general election, and 33.8 points in the four held since Ball took over the party. The PCs have shed 25.2 points on average over the last four contests, while the New Democrats have lost 8.1 points.

This falls into line with what the polls have been saying. If we look at the last three polls in the province, done by three different firms between the end of July and October, we get the Liberals at 56% support, followed by the Tories at 29.2% and the NDP at 13.8%. Since the 2011 election, that represents a drop of 26.9 points for the PCs and 10.8 points for the NDP, with a gain of 36.9 points for the Liberals. Those shifts are almost identical to the average changes in support over the last four by-elections.

If we look at it in terms of proportional changes, the Liberals have more than quadrupled their vote share in the last four by-elections. The New Democrats have retained just about two-thirds of theirs, while the PCs have retained only three out of every five voters who cast a ballot for their party in 2011.

So what does that tell us about the by-elections being held tonight? The By-Election Barometer considers Trinity-Bay de Verde a 'Strong Liberal' pick-up, while Humber East is a 'Likely PC' hold. Going by the past shifts we've seen in other by-elections, this seems reasonable.

Trinity-Bay de Verde was won by the PCs with 61.9% of the vote in 2011, with the Liberals taking 23.9% and the NDP capturing 14.2%. The margin of 38 points between the PCs and Liberals is far smaller than the swings that have occurred in each of the last four by-elections (the smallest swing was 50.3 points in St. George's-Stephensville East, the largest was 69.8 points in Carbonear-Harbour Grace).

The riding is thus well within striking distance of the Liberals. If the average point swing we've seen since Ball became Liberal leader occurs in Trinity-Bay de Verde, the party should take about 58% of the vote to 37% for the Tories (and 6% for the NDP). It would require a comparatively very poor performance by the Liberals to lose this one.

But Humber East could be just outside of their grasp. The Tories took 78.2% of the vote here in 2011, with the NDP taking 13.3% and the Liberals just 8.5%. That puts the gap between the Liberals and the Tories at 69.7 points - just 0.1 percentage points less than the swing that occurred in Carbonear-Harbour Grace. The Liberals would need another massive swing of that size in order to wrestle the riding away.

It might be too much to ask to repeat that performance. If the average swing occurs, the Tories would win it by 53% to 42% for the Liberals (and 5% for the NDP). Even if we apply the proportional swing, dropping the PCs by a factor of 0.6 and quadrupling the Liberal vote, they still come up short by 11 points.

Winning Humber East will be a tall order for the Liberals, but they have shown they are capable of such enormous swings before in Carbonear-Harbour Grace. With the shifts we've seen in Newfoundland and Labrador, even a riding like Humber East could flip. Tom Marshall, who held the riding for the Tories since 2003, was a popular MHA and the riding was won by the Liberals when they were last in government. Despite what the numbers say about the likelihood of Humber East going over to the Liberals, they nevertheless have a shot at it. And that just about sums up how bad things are for the Progressive Conservatives in Newfoundland and Labrador.
Posted by Éric at 9:23:00 AM