It was an eventful month in Ottawa, with the vote on the Iraq mission and the shootings on Parliament Hill both taking place. Four national polls and two regional surveys (one in Alberta, the other in Quebec) interviewed a total of just over 7,600 Canadians, finding that the Liberal lead has slipped a little. Nevertheless, that lead has now held for 19 consecutive months. 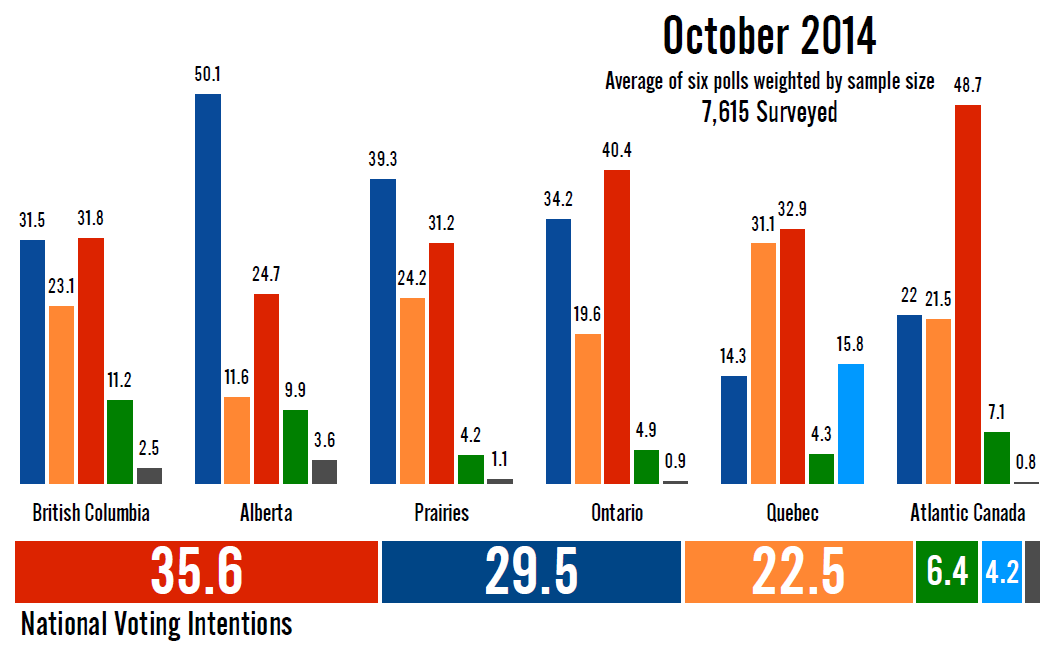 The Liberals averaged 35.6% support in October, down 2.4 points from their standing in September. That represents three consecutive months of softening support, though they still remain above where they were in the spring. 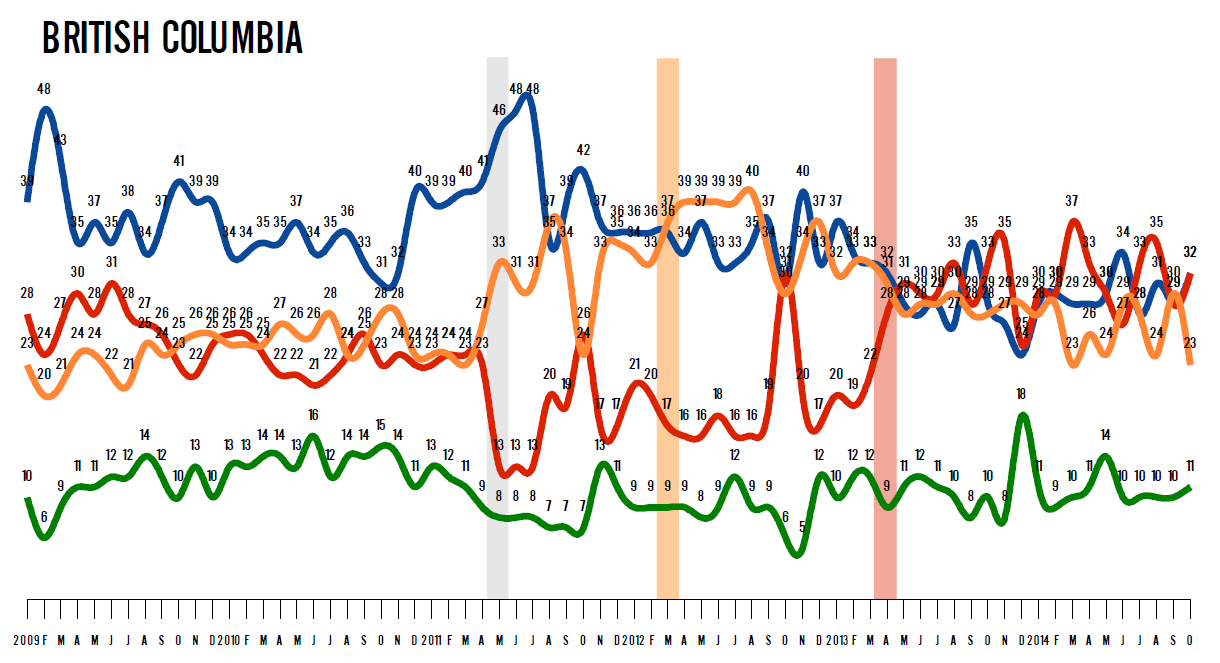 The Liberals picked up 2.4 points in British Columbia to move into a narrow lead with 31.8%, followed by the Conservatives. They were up 2.2 points to 31.5%. The New Democrats fell to their lowest level of support since March, slipping seven points to 23.1%. The Greens, meanwhile, were at their best since May with a gain of 0.8 points to 11.2%.

The Liberals slid 3.7 points in Quebec to 32.9%, putting them just ahead of the New Democrats. The NDP has gained for three consecutive months now, up 1.1 points since September to 31.1%. The Bloc Québécois was up 0.3 points to 15.8% (they have been around 16% for the last three months), while the Conservatives were also up 0.3 points to 14.3%. The Tories have been at 14% in seven of the last eight months. The Greens were up 1.2 points to 4.3%. Support for other parties, which is unlikely to include Forces et Démocratie as only one of the five polls conducted in Quebec were done after its launch, increased from 0.8% to 1.5%.

With these levels of support, the Liberals would likely win about 136 seats, a drop of seven since September's projection. The Conservatives were up 10 seats to 122, while the NDP was down four seats to 77.

The Liberals gained three seats in British Columbia, but were down one in the north, three in Quebec, and six in Ontario.

The Conservatives were up five seats each in British Columbia and Ontario. They held steady everywhere else.

The New Democrats were down eight seats in B.C. but were up one each in the north and Ontario, and two in Quebec.

The Greens remained at two seats in British Columbia, while the Bloc moved from being shutout in Quebec to holding one single seat.

Overall, it was a relatively stable month with most shifts at the regional level being below 2.5 points. Even the Liberal drop nationwide could be anomalous. The decrease recorded by Abacus Data in October has already been mostly erased in a November survey, and EKOS's shift in Liberal support might have been due to a change in methodology. But Forum also showed a slip, so perhaps it was something real that may, or may not, be made good in November. We'll have to see what other surveys turn up in the coming weeks. As yet, though, no one party seems to have taken particular advantage.
Posted by Éric at 9:39:00 AM