From bad to worse for the NL PCs

A quick follow-up on yesterday's post on the two by-elections held last night in Newfoundland and Labrador. By-elections over the last three years have been rough for the governing Progressive Conservatives. These last two were catastrophic. 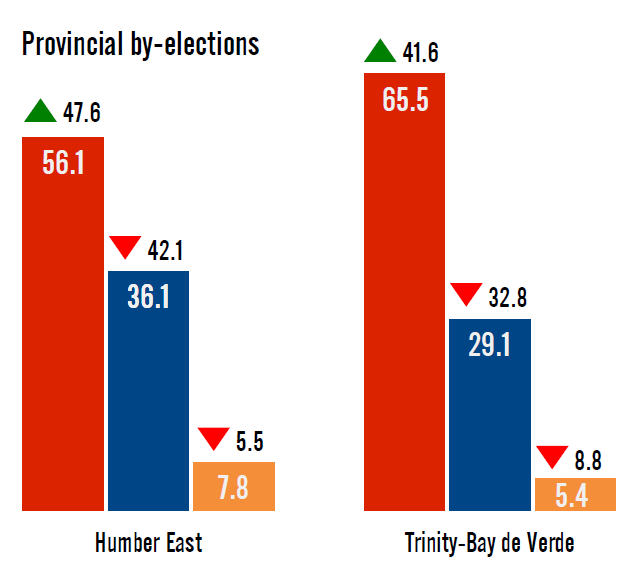 The Liberals won both of these ridings by very comfortable margins after benefiting from gigantic swings from both the NDP and the PCs to their party.

The swing that occurred in Humber East is absolutely extraordinary. The Liberals gained 47.6 points and the PCs fell 42.1 points, for a total swing of 89.7 points. This has to be one of the largest swings in Canadian electoral history, if not the largest. To recall, just three years ago the PCs took 78.2% of the vote here and the Liberals only 8.5%. The PC vote share fell by more than half. The Liberal share increased almost seven fold.

In Trinity-Bay de Verde, the Liberals picked up 41.6 points and the PCs fell 32.8 points. The NDP vote fell by almost two-thirds.

These were horrific results for the PCs. The seven by-elections that have been held since the last provincial election have all been bad for the Tories, but these swings of 74.4 and 89.7 points are the largest to have occurred. In every previous by-election, the Tories had at least maintained half of their vote share. Here, they lost a majority of it. Before last night, the Tories had shed an average of 22.8 points per by-election. Last night, they dropped an average of 37.5 points.

A shocker? In terms of the scale of the Liberal victory in Humber East, most certainly. But after the extraordinary results the Liberals had put up in other by-elections, no one was counting the party out. I said so myself in yesterday's post, and the By-Election Barometer's subjective analysis for this riding said so as well (no model could plausibly predict such a historic swing). The Liberals appear unbeatable in Newfoundland and Labrador.

But these are by-elections, and the next provincial election may not be so easy. Regardless, there is no way to look at these results and consider the Tories' chances next year anything but slim.
Posted by Éric at 9:08:00 AM