In the first update since the site went on hiatus two weeks ago, the New Democrats are now leading in both the vote and seat projections for the first time since 2012.

It was quite a two weeks to be away, as it featured some of the most dramatic swings in voting intentions we've seen since the immediate aftermath of Justin Trudeau's Liberal leadership victory. Coupled with the NDP's surge into first place in every poll conducted by a gaggle of pollsters using every methodology under the sun was the return of Gilles Duceppe as leader of the Bloc Québécois, jarring the race in Quebec as well.

The NDP now leads in the poll average with 32.4%, an increase of over three points since the pre-hiatus projection update. The Conservatives have dropped a little more than one point to 28.9%, while the Liberals are down a little less than one point to 27.4%. The Bloc has moved ahead of the Greens with 5.2% to 4.9%.

In terms of the seat count, the NDP is now projected to win between 113 and 140 seats, up significantly from the pre-hiatus update which did have the NDP overlapping with the Conservatives but still firmly in second place. The Tories have fallen to between 99 and 141 seats, while the Liberals have dropped to between 71 and 106 seats.

There were quite a few polls released over the two weeks I was away, but their field dates influenced the last five weeks of projections in the model. For instance, the Angus Reid poll that was released while I was away was actually older than the EKOS Research poll that was out on the Friday just before my departure.

So, I've compiled all the numbers in the chart below to give you all a full accounting of how the projection would have looked throughout the month of June. As a reference point, I've included the projection just before the NDP's provincial victory in Alberta, which seems to have been the catalyst for the recent shift in voting intentions. 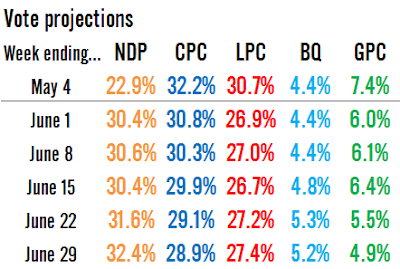 As you can see, the NDP's numbers were relatively stable over the last week of May and first two weeks of June, after initially surging from the pre-Alberta numbers. But the party has seen been edging up over the last two weeks.

And with the addition of the Angus Reid poll, we can see that the NDP has been leading in the poll average now since the week ending June 8.

This is because the Conservatives have been slipping. The Liberals seem to have contributed to the NDP's surge in May, but since the beginning of the month the NDP has primarily been taking from the Conservatives and Greens. The Tories were at 30.8% and leading in the week ending on June 1, but have since been dropping in every subsequent week. The Greens have taken a hit over the last two weeks, though that might be because of the unusually poor results for the party in the most recent polls by Forum Research and Ipsos Reid. 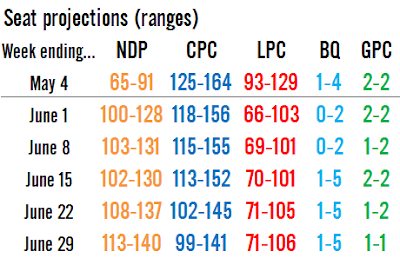 In terms of the seat ranges, we can see that the Conservatives were comfortably ahead at the beginning of May. They overlapped only slightly with the Liberals, while the NDP was solidly in third. 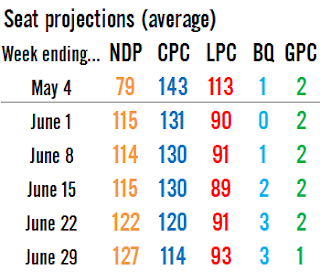 Going just by the averages, we see the same sort of story being played out. After dropping, the Liberals are now holding steady as the NDP eats into the Conservatives' seat numbers. Sooner or later, the Tories will need to turn more of their attention on Thomas Mulcair.

The shift over the last two months has been nothing short of incredible. The Conservatives have dropped 29 seats and the Liberals have dropped 20 seats in the projection since the beginning of May. The NDP, meanwhile, has picked up 48 to move into first place.

At these levels of support, the NDP is on track for a plurality of seats. It is interesting to note, though, that the maximum projected total for the NDP is 179 seats, which puts them over the majority mark. Granted, that assumes the NDP has hit about 41% support in voting intentions. But the path to a majority can at least be laid out. The same goes for the Conservatives but not, at this stage, the Liberals.

There are two questions that will be answered over the next few weeks. The first is, of course, whether or not the New Democrats will continue to lead in the polls through to the start of the campaign (official or not, we have to consider August 6 to be the effective start of the campaign as that is when the Maclean's debate will be held).

The second question (a set of them, really) revolves around the Liberals and the Conservatives. Look at the recent set of polls that have been out:

The Conservatives seem to have dropped quite a bit, after routinely polling over 30%. They are now polling in the high-20s, which has put them in a tie with or behind the Liberals in four of the last polls. This is in contrast to the EKOS and Angus polls from earlier in June which suggested that the Liberals were collapsing.

Are the Conservatives going to continue losing support? Did the Liberals hit a rough patch in early June, only to recover over the last few weeks, or were those polls by EKOS and Angus Reid slightly anomalous? Can the Liberals sustain support in the high-20s when the NDP is polling in the mid-30s?

We're in the midst of a period of transition in voting intentions, so it will be very interesting to see where the numbers go from here.

I would be remiss not to address the shifting landscape in Quebec, which has two factors currently at play. The first being the surge of the NDP, which was felt in Quebec before the change of leadership at the Bloc, and the second being that return by Gilles Duceppe.

There definitely has been some movement that can only be attributed to Duceppe. In the week ending June 8, just before Duceppe returned to lead the Bloc, the party was polling at 17.4%. It is now projected to take 21.4%, its best score since the official model was launched at the beginning of the year and better than any monthly average Mario Beaulieu ever managed. Even two large-sample polls by Léger and CROP put the Bloc at 26% and 25%, respectively.

Still, in terms of the weighted average it is an increase of just four points that can be attributed to Duceppe. And this is still two points below Duceppe's performance in 2011. But despite the poorer showing than that election the model gives the party between one and five seats, potentially matching or surpassing that 2011 performance. The reason for that is simple: the NDP remains the Bloc's main opponent in most ridings in Quebec, and the NDP is averaging 35.1%. That is below the 42.9% of 2011, and so this gives the Bloc a better shot. Every extra point pays out-sized dividends to the Bloc when the NDP is below 40%.

But has Duceppe's return hurt the NDP? That is more difficult to say. The NDP was in the midst of a surge in Quebec when Duceppe made his announcement. In the week ending on June 1, the party was averaging 37.8% in the polls and was well on its way to repeating its 2011 scores. At first glance it appears that Duceppe may have reversed that NDP surge somewhat from the high-30s to the mid-30s, but it is impossible to know for certain. The average for the week ending June 8, before Duceppe's return, put the NDP back down to 35.9% in Quebec.

What can be said with certainty is that both the Liberals and Conservatives are doing worse in Quebec than they were just a few weeks ago. The Liberals were slowly leaking support through to the end of May, but fell steeply over the last few weeks to 23.5%, down from 26% or 27%. The Conservatives, meanwhile, have dropped to 15.8% from 21% at the beginning of May, and from 18% just before Duceppe's return.

The trend lines tell the story that the NDP was making gains at the expense of the Liberals and Conservatives in Quebec after their Alberta victory, and then subsequently the Bloc made gains at the expense of the NDP when Duceppe came back onto the scene (though not nearly enough to erase the gains the NDP had made). Undoubtedly, though, the truth is somewhat more complicated than that, with voters crossing the political spectrum in less direct ways.

These are interesting times, with multiple front campaigns taking place everywhere. The NDP appears to have made its gains at the expense of the Liberals in most parts of the country, and are now starting to eat into Conservative support. The rejuvenated (re-oldinated?) Bloc in Quebec makes for a different dynamic there. Every party needs to start reviewing its strategy with just a few months to go.
Posted by Éric at 8:29:00 AM