Based on their current standing in the polls, the Liberals under Justin Trudeau have the best chance of winning the 2015 federal election. But their victory is not assured, and Stephen Harper's Conservatives have a chance to win a victory of their own. Thomas Mulcair's New Democrats will almost certainly finish third, with Gilles Duceppe's Bloc Québécois and Elizabeth May's Greens finishing fourth and fifth, respectively. A minority government of one hue or the other is the most likely outcome, though a majority is within the realm of plausibility.

Please check out the CBC Poll Tracker to see the details of the latest projection, as well as to see how the polls have trended since the beginning of the campaign. The riding projections can be found here, along with Stephen McMurtry's terrific interactive map.

I also invite you to read my final polling analysis of the campaign for the CBC here, which goes over what we can glean from the polls, and what to keep in mind as we await the results on Monday night.

The Liberals are projected to win between 124 and 161 seats, putting them just below the 170-seat mark required for a majority. This also gives them a decent amount of overlap with the Conservatives, which is why a Liberal victory is not, by any stretch, a certainty. The party is projected to win between 33.5% and 39.9% of the vote, which gives them a very high likelihood of finishing in first place in the popular vote. It would be an upset if they don't. 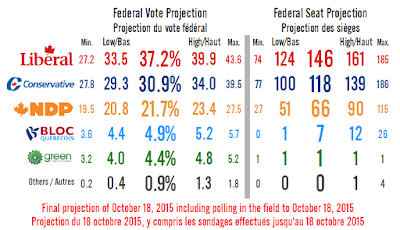 The highest probability outcome for the Liberals would be within the low to average band (124 to 146 seats), but the most likely outcome would be between the minimum to high bands. That is a very wide range, and thus not very helpful. But it does show that if the Liberals outperform the average projection, they would be doing better than most parties that had their status in the legislature at dissolution. But of note is that they have a 23% chance of finishing between the high and maximum ranges, which does put them in majority territory.

The precise projection gives the Liberals 37.2% of the vote and 146 seats, their best performance since 2000, when the party last formed a majority government.

The Conservatives are projected to win between 100 and 139 seats. This makes a majority for them a stretch of the imagination, but does put them in a position to potentially win the plurality of seats by a very narrow margin. At the extremity of the likely ranges, that would give the Tories only a 15-seat advantage over the Liberals, while at the other extremity the Liberals would have a 61-seat advantage.

The Conservatives are projected to take between 29.3% and 34% of the vote, and the most likely outcome for them should fall within the average to high projection. That means it could be very close between the Liberals and Conservatives in the seat count, though there is still a one-in-four chance that the Conservatives will under-perform their polling (it is a little more than one-in-two for the Liberals).

The average projection gives the Conservatives 118 seats and 30.9% of the vote, their worst result since 2004, the last time the party sat on the opposition benches.

The NDP is projected to take between 51 and 90 seats. That puts them squarely in the position to become the third party in the House of Commons, with no overlap with either the Conservatives or the Liberals. The party is projected to take between 20.8% and 23.4% of the vote, which also suggests they will finish in third. They have a two-in-five chance of slightly out-performing their polls, falling in the average to high band (which would deliver 66 to 90 seats). They have a two-in-three chance of finishing within the low to high band.

The NDP's average projection gives them 66 seats and 21.7% of the vote, the party's second-best performance in its history.

Relative to the number of seats they are projected to take, the Bloc Québécois has the widest range. They are projected to win between one and 12 seats, which puts them (at the outer edge) just on the cusp of official party status — the party's stated minimum goal. That may be a hard bar to reach.

The Greens are projected to win just one seat, and between 4% and 4.8% of the vote. That puts them roughly where they were in the 2004 and 2006 elections, with the addition of a seat.

The minimum to maximum projected ranges give an indication of what could plausibly happen on election night, based on how the polls have missed election calls in the past. And this is what these numbers generally represent: a miss by the polls (though, potentially, not all of them).

A few factors are at play here. The first is the momentum the Liberals seem to have (Nanos's polling on October 18 put the party at 39%, while Forum put them at 40% in their one-day poll), and the risk of a bandwagon effect (and strategic voting) pushing them beyond where the bulk of the final polls of the campaign had them. The second is the potential for the Conservatives to outperform their polls by a significant degree, due to the 'shy Tory effect', higher voter turnout among the demographics that are advantageous to them, more resources and better organization, or a combination of these factors.

At the outer edges of plausibility, we could see majority governments for either the Conservatives or the Liberals. We could even technically see a very weak NDP minority government. But these outcomes only occur at the limit of the 95% confidence interval.

More realistically, we could see the Conservatives finish somewhere in the 140 to 160 seat range, which would complicate matters for the opposition parties. Particularly if the Bloc ends up anywhere near its maximum range of 26 seats. We could, of course, also see them fall below the 100-seat mark.

A plausible over-achievement for the New Democrats would see them retaining almost all of the seats they won in the 2011 election. If that happens, the Liberals are probably finishing second.

The charts below break down the numbers for each of the six regions. The Liberals are favoured to finish first by a wide margin in two of them: Atlantic Canada and Ontario. They are narrowly favoured to win the popular vote in Quebec and British Columbia, but are expected to lose the seat race in both provinces (though not necessarily). They should finish second in the Prairies and in Alberta. If the polls are right, the Liberals could potentially finish first in every province except Alberta and Saskatchewan. 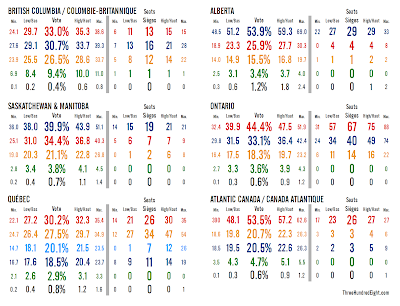 The Conservatives are heavily favoured to win Alberta and the Prairies, and are narrowly behind in British Columbia. They should finish second in Ontario and are in a close race with the New Democrats for that spot in Atlantic Canada. In Quebec, they are vying with the Bloc for the third spot, but are expected to finish fourth.

The NDP is projected to finish third by a wide margin in Alberta, the Prairies, and Ontario. The New Democrats are also slated for third place in British Columbia, with second place finishes in Quebec (though likely with more seats) and, by a hair, in Atlantic Canada.

When this campaign began, the Liberals were sinking deeper into third as the Conservatives and New Democrats jostled for top spot. The idea that the Liberals would be favoured to win a minority government, and potentially even a majority government, would have been seen as unlikely, to say the least. And yet here we are, with word being from those in the know that there is greater likelihood of the Liberals outperforming their polls as they pick up strategic voters from the NDP, rather than the Conservatives pulling off an upset.

The Liberals have the momentum and have big numbers in Ontario. These two factors alone could be enough to carry them through. Indications that the party is doing surprisingly well among francophones in Quebec and could win more seats than previously believed in places like Alberta are strong signals that the safe money would be on the Liberals tonight.

But Conservative parties in Canada have made a habit of beating expectations on election night. And why not? Their supporters tend towards the older, as do voters. In a campaign where Stephen Harper has been (rightly or not) vilified, and in which identity politics reared its ugly head, why wouldn't poll respondents be reluctant to say they intend to vote Conservative? Both of these factors could give the Conservatives a boost at the ballot box. Maybe not the five points that some think is plausible, but just enough to turn an easy Liberal victory into a nail biter. On the other hand, after 10 years in office and a lacklustre campaign, maybe their supporters simply don't show up.

And what of the NDP? Their incumbents can be tough to beat, proving resilient in a number of elections in which the NDP had a far slimmer chance of forming government than they have today. And perhaps the vote splits in Quebec will work in their favour, rather than against them. Combined, that could easily boost the NDP closer to the 100-seat mark than they are currently projected to hit, which has the potential to hurt the Liberals in their quest for victory.

But these are only plausible what-if scenarios. The Liberals should win tonight, based on the data that is available. Will they? And, if so, will it be a minority or majority government?

On a personal note, I'd like to thank everyone reading for making the Poll Tracker and this site such a tremendous success during the election campaign. It has been very rewarding and endlessly enjoyable to work with such a great organization as the CBC, and to get such fantastic support from the wonderful team at the CBC Parliamentary Bureau in Ottawa (and, lately, in Toronto). It has also been rewarding to see how much fun many of you have had following the trends with me over the last few months. I hope the results on Monday night will show it was worthwhile to follow the polls and my analyses in this roller-coaster of an election campaign. Now it's up to you: go vote!
Posted by Éric at 12:22:00 AM