Polling was particularly thin in the month of February at the federal level, with only two national and one Quebec poll being conducted and published. In all, just under 4,000 Canadians were surveyed.

The polls suggest that the high levels of support the Liberal government has been enjoying since its election victory in October are, for the time being, holding fast. 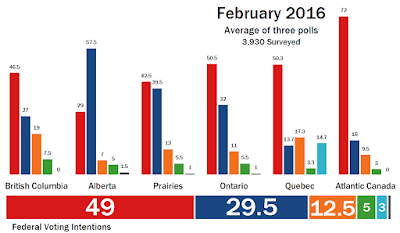 In the two polls conducted in February, the Liberals averaged 49 per cent support — up about four points from their January averages.

The Conservatives under interim leader Rona Ambrose were up about one point to 29.5 per cent, while the New Democrats were down four points to 12.5 per cent.

The Greens averaged 5 per cent and the Bloc Québécois 3 per cent.

Tom Mulcair's New Democrats were at their lowest level of support in February since I began calculating the monthly averages in January 2009, or over seven years ago. Going through my sparser archives before that date, it seems likely that February 2016 could have been the worst month in polling for the NDP since the end of 2003. 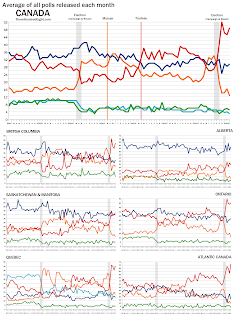 The Liberals led in British Columbia with 46.5 per cent support, followed by the Conservatives at 27 per cent and the New Democrats at 19 per cent. The Greens averaged 7.5 per cent. With these numbers, the Liberals would be able to win 22 to 38 seats in British Columbia, with the Conservatives winning between two and 13 and the New Democrats between one and nine. Elizabeth May would be in no danger in her seat.

There was little movement in Ontario, where the Liberals led with 50.5 per cent support (and could win 80 to 101 seats with that number). The Conservatives were at 32 per cent (19 to 39 seats) and the New Democrats dropped to 11 per cent (one to three seats). The Greens were at 5.5 per cent.

The Liberals dominated in Quebec with 50.3 per cent support, enough to win them 68 to 73 of the province's 78 seats. The New Democrats were down to 17.3 per cent (zero to one seat), while the Bloc Québécois was unchanged at 14.7 per cent. The Conservatives dropped to 13.7 per cent, but would win five to nine seats with that level of support. The Greens averaged 3.3 per cent.

And in Atlantic Canada, the Liberals were at 72 per cent — a big 15-point jump that we can mostly ignore since it was derived from just two small regional samples. The Conservatives were down to 16 per cent and the NDP to 9.5 per cent, and would continue to be shutout of the seat count. At 3 per cent, the Greens had their lowest level of support here.

Overall, that would put the Liberal tally at between 216 and 264 seats, a big increase from the 184 seats the party won in October.

The Conservatives would win between 71 and 112 seats, putting them in the ballpark of the 99 seats they currently hold, while the New Democrats would be down sharply to between two and 13 seats. 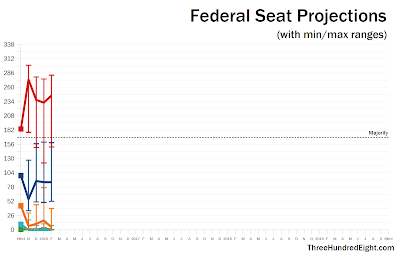 The Bloc would not win a single seat and the Greens would retain their one.

At the maximum ranges, the Liberals and Conservatives barely overlap even at the 95 per cent confidence interval, while the New Democrats are solidly in third — or worse.

New polls were conducted and published in the month of February in Alberta, Saskatchewan, Manitoba, Ontario, and Quebec. 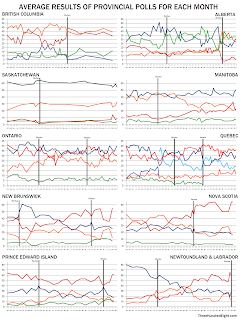 In Alberta, the Wildrose was narrowly ahead in a three-way pile-up with 33 per cent, followed by the Progressive Conservatives at 31 per cent and the New Democrats at 27 per cent. The Liberals had 5 per cent and the Alberta Party just 4 per cent support. This represents a rather big spike for the leaderless PCs, though Brian Jean's Wildrose and Rachel Notley's NDP have been jostling for position since the May 2015 election.

The Manitoba Progressive Conservatives under Brian Pallister averaged 50.5 per cent in February, followed by Rana Bokhari's Liberals at 21.5 per cent and Greg Selinger's New Democrats at 21 per cent. The Tories' lead against a divided set of opponents continues to look unassailable for the April election.

In Ontario, the Progressive Conservatives were well ahead with 40 per cent support. Trailing in second were the governing Liberals under Kathleen Wynne at 30 per cent, with the New Democrats under Andrea Horwath at 24 per cent support. Patrick Brown's PCs have been leading since August 2015, though this is the widest gap since September.

And in Quebec, the Liberals continued to lead with 36 per cent support, followed by the Parti Québécois at 30 per cent, François Legault's Coalition Avenir Québec at 19.5 per cent, and Québec Solidaire at 11 per cent. After a brief surge following Pierre Karl Péladeau's PQ leadership victory, the lead of Philippe Couillard's Liberals has been holding steady.
Posted by Éric at 2:59:00 PM