The latest quarterly numbers from the Corporate Research Associates for Atlantic Canada are out, and they show the Liberals, which govern in each province in the region, still leading by wide margins. 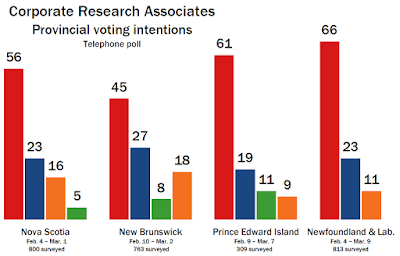 Starting in Nova Scotia, the Liberals led there with 56 per cent support, followed by the Progressive Conservatives at 23 per cent, the New Democrats at 16 per cent, and the Greens at 5 per cent.

Compared to CRA's last poll three months ago, this represents a drop of eight points for the Liberals and a gain of six points for the PCs. In fact, the Tories are at their highest level of support in CRA's polling since the 2013 provincial election.

Stephen McNeil led on who Nova Scotians prefer to be premier with 41%, followed by Jamie Baillie and Gary Burrill at 15% each (Burrill's numbers were partially split with the former interim NDP leader, Maureen MacDonald).

While this is a big drop for the Liberals, it still puts them above where they were before the federal election last year.

Brian Gallant's numbers on being the preferred premier were down nine points to 30 per cent, followed by Bruce Fitch (interim PC leader) at 19 per cent and Dominic Cardy and David Coon of the NDP and Greens at 10 per cent apiece.

The Liberals were steady in Prince Edward Island, holding at 61 per cent support. The PCs trailed at a distance with 19 per cent, the Greens at 11 per cent. and the NDP at 9 per cent.

Wade MacLauchlin was the preferred premier of 41 per cent of respondents, down seven points. Peter Bevan-Baker of the Greens was second at 22 per cent — meaning his own personal support was more than twice that of his party. Jamie Fox of the PCs and Mike Redmond of the NDP had 13 and 10 per cent support, respectively.

Finally, the Liberals were up to 66 per cent support in Newfoundland and Labrador, after winning the last election there in November with 57 per cent of the vote. The Tories were at 23 per cent and the New Democrats at 11 per cent.

Dwight Ball was the preferred premier of 53 per cent, with Paul Davis at 29 per cent and Earle McCurdy at 8 per cent.


The latest Nanos numbers on who Canadians prefer as prime minister continue to show Justin Trudeau way ahead of his rivals. In fact, it doesn't seem like the honeymoon is wearing off, as Trudeau's numbers are as high as they have been since the October election. 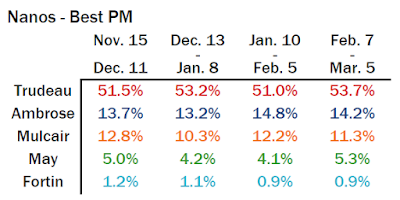 Trudeau led with 54 per cent, up almost three points from the last independent four-week sample from Nanos.

Rona Ambrose and Tom Mulcair were down only marginally, to 14 and 11 per cent, respectively. Elizabeth May was at 5 per cent and Rhéal Fortin at just under 1 per cent.

Trump could run table on Tuesday

There haven't been any recent polls in Missouri. Cruz won the neighbouring states of Kansas, Oklahoma, and Iowa, while Trump took Kentucky, Arkansas, and Tennessee. Cruz won his states by an average of 11.4 points over Trump, while Trump prevailed over Cruz in his three states by 6.9 points. Missouri is a state that is more important to Cruz's map than it is to Trump's, so perhaps Cruz gets the nod.

Nationally, Trump leads among Republican voters with 36 per cent, followed by Cruz at 21 per cent, Rubio at 17 per cent, and Kasich at 10 per cent. Compared to when we last checked-in two weeks ago, that is a gain of one point for Trump and Rubio and two points for Cruz and Kasich. Of note, however, is that two weeks ago Ben Carson was in the race with 8 per cent of the vote.

On the Democratic side, Hillary Clinton is leading in the four Super Tuesday states with polls by between 20 and 34 points, and Missouri is certainly the kind of state she should win. Bernie Sanders may be cooked by Tuesday night.

Nationally, Clinton is up three points over the last two weeks to 52 per cent, while Sanders is down one to 38 per cent among Democrats.

'Lame duck' U.S. President Barack Obama hits new high in popularity - Compared to what is happening in the presidential nominations, Obama appears to be looking good.

Brad Wall continues to lead in new Saskatchewan polls - My latest analysis on the state of the race in Saskatchewan, with a look at the new polls this week from Forum and Mainstreet.

Marco Rubio's hopes for Republican nomination could be over - After his terrible results this past week, I pronounce Rubio's campaign to be as good as done.

The challenges parties face as Saskatchewan campaign begins - My set-up of the Saskatchewan election campaign.
Posted by Éric at 2:02:00 PM