Six months after the 2015 federal election, six national polls were conducted during the month of April, surveying a total of just over 15,000 Canadians. The Liberals continue to lead by a wide margin, picking up a little support after dropping back in March. 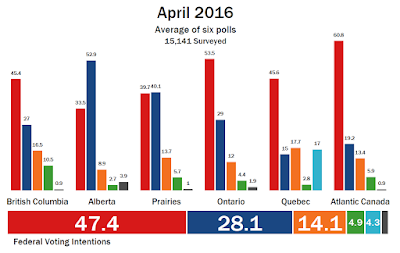 The Liberals averaged 47.4 per cent support in April, up 2.4 points from where they were in March.

The Conservatives followed with 28.1 per cent, down 2.4 points, while the New Democrats were up one point to 14.1 per cent.

The Greens averaged 4.9 per cent, down 0.6 points, and the Bloc Québécois was down 0.1 point to 4.3 per cent. Another 2 per cent said they supported another party. 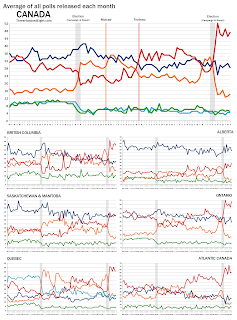 In Alberta, the Conservatives dropped 5.8 points to 52.9 per cent, and slid down significantly to between 23 and 28 projected seats. The Liberals were up 5.5 points to their best numbers since November, with 33.5 per cent. They could win six to 10 seats with that level of support. The New Democrats were up 2.3 points to 8.9 per cent, and could be shut out or win one seat. The Greens were down 1.3 points to 2.7 per cent.

The Liberals made their biggest gain in Ontario, where they were up 6.8 points to 53.5 per cent, their best showing since November. The Conservatives were down 6.4 points to 29 per cent, their worst since November. The New Democrats were down 0.6 points to 12 per cent. Seat-wise, this would give the Liberals between 96 and 116 seats, a big increase since March. The Conservatives would win between five and 22 seats, and the New Democrats zero to three. The Greens were down 0.1 point to 4.4 per cent.

This all adds up to between 229 and 280 seats for the Liberals, up about 20 seats from the March projection.

The Conservatives would take between 55 and 96 seats, down about 20 seats, while the New Democrats were up a couple seats to between one and 10.

The Greens would win between one and two seats and the Bloc between zero and four. 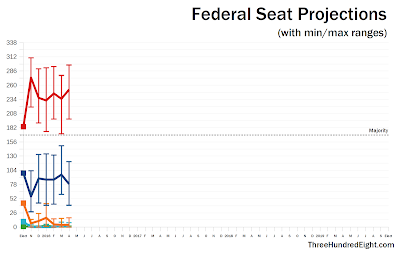 The Liberals are still comfortably over the majority mark, even at the 95 per cent confidence interval. April was their best month since November.

The Conservatives are still running below their 2015 result, while the New Democrats continue to struggle to register enough support to guarantee official party status.

So the Liberals are still riding high, six months after their majority victory in October 2015. And much of that new support has come at the expense of the New Democrats. But unlike last month, we now know that the NDP will have a new leader come 2019. Whoever it will be, the goal is simple — get those New Democrats parking their vote with the Liberals back.

It was a busy month in Manitoba and Saskatchewan, where provincial elections were held. Elsewhere, though, only one poll was conducted in Ontario, Quebec, and in each of the Atlantic provinces. 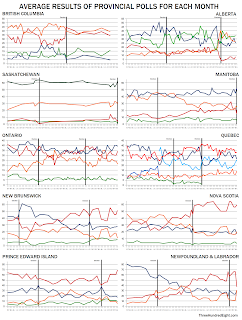 Brad Wall's Saskatchewan Party won the Saskatchewan election with 62.4 per cent of the vote, with Cam Broten's New Democrats taking 30.2 per cent. Broten has since stepped down as leader. The polls had averaged 61 to 30 per cent support in April before the vote was held.

Patrick Brown's Progressive Conservatives led in Ontario with 39 per cent, followed by the governing Liberals under Kathleen Wynne with 34 per cent. That was the best result the Liberals have managed in Ontario since November. Andrea Horwath's New Democrats were down to 21 per cent, their lowest since February 2015.

In Quebec, Philippe Couillard's Liberals were at 33 per cent, followed by the newly-leaderless Parti Québécois at 26 per cent — their worst since February 2015. François Legault's Coalition Avenir Québec was up to 25 per cent, its best since March 2015, while Françoise David's Québec Solidaire was at 14 per cent.

The Liberals under Brian Gallant in New Brunswick led with 51 per cent, followed by the Progressive Conservatives at 28 per cent, Dominic Cardy's New Democrats at 11 per cent, and David Coon's Greens at 9 per cent.

Stephen McNeil's Liberals led in Nova Scotia with 59 per cent, with Gary Burrill's New Democrats at 20 per cent and Jamie Baillie's PCs at 17 per cent.

The Liberals in Prince Edward Island under Wade MacLauchlan were at their highest level of support since before January 2010 with 69 per cent, followed by the PCs at 17 per cent and the Greens under Peter Bevan-Baker at 9 per cent.

There was dramatic movement in Newfoundland and Labrador following the province's recent traumatic budget, but it is worth noting that the only poll in the province last month came from MQO Research, and not from the Corporate Research Associates. So it could be an apples to oranges comparison. Nevertheless, Dwight Ball's Liberals plummeted to 37 per cent, their worst level of support in a poll from that province since May 2013. The New Democrats under Earle McCurdy were at their highest level since August 2013 with 31 per cent, while Paul Davis's PCs were at 30 per cent.
Posted by Éric at 3:38:00 PM