The post-election period begins, and the federal polling will remain light for a little while. But two polls were conducted last month, and they show the Liberals in the midst of quite a little honeymoon. 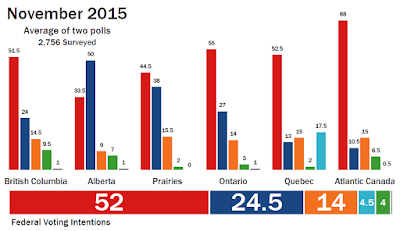 The Liberals averaged 52% in those two polls conducted by Forum Research and Abacus Data. That is an increase of over 12 points from the election results.

The Conservatives averaged 24.5%, a drop of over seven points, while the New Democrats were down almost six points to 14%. 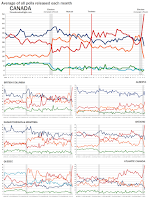 The New Democrats were in second only in Atlantic Canada, where they stood at 15%. They had third place showings in the rest of the country, with 14.5% in British Columbia, 9% in Alberta, 15.5% in the Prairies, 14% in Ontario, and 15% in Quebec.

The Bloc Québécois held the second spot in Quebec with 17.5% support. The Greens had their best result in British Columbia, where they were at 9.5%.

Early days, of course, and the polls have little practical impact. But it does suggest that Canadians are reacting favourably to the Liberals' first weeks in office.
Posted by Éric at 1:01:00 PM