Like ThreeHundredEight.com on Facebook to be alerted to new CBC articles and updates to the site's provincial and federal polling averages.

A total of just four polls on national voting intentions was conducted in the month of June, three of them nationally and one of them in Quebec. In all, these polls surveyed about 7,142 Canadians. They recorded no serious movement in public opinion compared to the month of May. 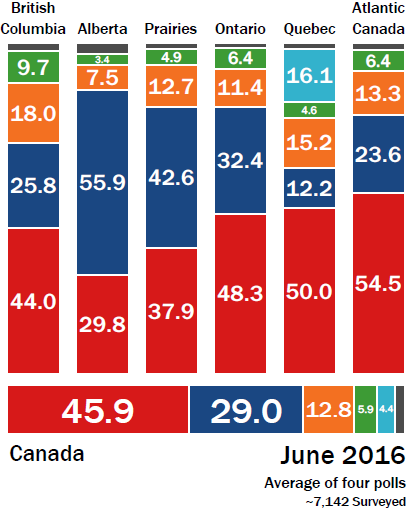 The Liberals averaged 45.9 per cent support, down 2.1 points from last month. The Conservatives followed with 29 per cent, up 0.3 points, while the New Democrats were down 0.9 points to 12.8 per cent.

The Greens were up 1.2 points to 5.9 per cent and the Bloc Québécois was up 0.4 points to 4.4 per cent. An average of 2.5 per cent of respondents said they would vote for another party. 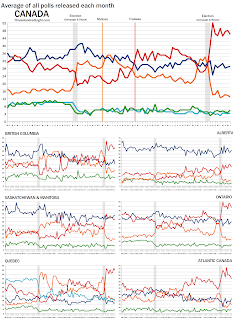 The Liberals continued to lead in British Columbia, increasing to 44 per cent support. The Conservatives were down 4.5 points to 25.8 per cent, while the New Democrats gained for the third consecutive month to end up at 18 per cent, up from 15.8 per cent three months ago. The Greens were unchanged at 9.7 per cent.

The Conservatives and Liberals were steady in Saskatchewan and Manitoba with 42.6 and 37.9 per cent support, respectively. It did result in a swing in the seat projection, though, with the Conservatives up to 18 to 20 seats and the Liberals down to eight to 10 seats. The NDP was down to 12.7 per cent, while the Greens fell for the third consecutive month to 4.9 per cent. The slide was modest, though, as they began this negative trend at 6 per cent.

The Liberals dropped 3.5 points in Ontario, but still led with 48.3 per cent support. They dropped to between 83 and 99 seats in the projection. The Conservatives were up to 32.4 per cent (and 21 to 35 seats), while the NDP dropped for the third consecutive month to just 11.4 per cent. The Greens posted their best numbers in the province since July 2015 at 6.4 per cent.

In Quebec, the Liberals continued to lead with 50 per cent, down slightly from May but up in the seat projection to between 69 and 73 seats. The Bloc Québécois held on to second spot again last month at 16.1 per cent. The New Democrats, at their lowest level of support since February 2011, fell for the third consecutive month to 15.2 per cent. The Conservatives followed with 12.2 per cent (but were down to between five and eight seats), while the Greens were up to their best since May 2015 at 4.6 per cent.

And in Atlantic Canada, the Liberals dropped to 54.5 per cent and between 28 and 29 seats. The Conservatives were up 5.3 points to 23.6 per cent and three seats, while the NDP was down to 13.3 per cent. The Greens posted 6.4 per cent support in the region. 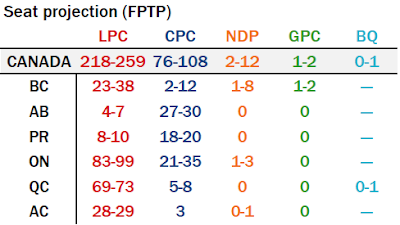 With these levels of support, the Liberals would likely have won between 218 and 259 seats in an election held in June. That was down about 16 seats from their standing in May.

The Conservatives would have won between 76 and 108 seats, up about 17 seats from last month. They now have 98 seats.

The NDP would have picked up about two seats from last month, and would have won between two and 12 seats. That is well below the 44 seats they now have. 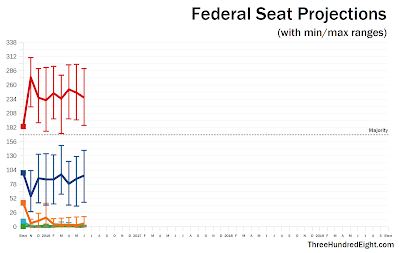 At the maximum ranges (which largely take into account the potential impact of an election campaign), the Liberals are still well within majority territory. The Conservatives are also the only party vying for Official Opposition status.

The NDP, with a maximum of 19 seats, is well above the highs of the Greens (two), and Bloc (three), but all could potentially be shutout, too.

This is based on the current first-past-the-post system (FPTP). With the electoral reform committee now getting to work, it is worthwhile to make some rough estimates of what outcomes different potential systems could produce.

For the alternative vote or ranked ballots (AV) I've also done a very simple estimate. Because the Liberals and New Democrats tend to be each other's second choice, I have awarded any seat where either party was projected to be in first place to that party. Any seat that the Conservatives led with 45 per cent or more was awarded to the Tories. Any seat where the Conservative was in first place but with less than 45 per cent was given to either the Liberals or the NDP, depending on which of these parties was in second place.

A crude method — but past experience with more sophisticated methods have yielded virtually identical results in the current political landscape. If things change, then it will become worthwhile to make this estimate with greater attention to detail. But a more sophisticated model with current polling numbers would not differ from this cruder one by more than a handful of seats.

And, of course, this assumes all else being equal — so no change of behaviour by the parties based on the system in place, no change in the behaviour of voters, and no other parties on the ballot. That is unlikely, but the impact of these things is unknowable at this stage.

With those caveats in mind, let's go through the results. 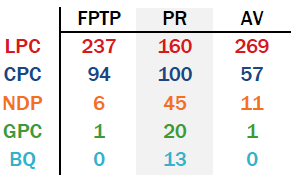 With FPTP, the Liberals win an enormous majority — 237 seats, to 94 for the Conservatives, six for the NDP, and one for the Greens. With 70.1 per cent of the seats, it would be the biggest majority government since Brian Mulroney's Progressive Conservative victory in 1984.

With PR, however, the Liberals are kept to a minority with 160 seats, just 10 shy of what they would need for a majority government. The Conservatives win 100 seats, only a little better than they did with FPTP.

But the NDP, Greens, and Bloc do significantly better with this system with 45, 20, and 13 seats, respectively. All three of them would reach the threshold of 12 seats needed for official party status.

The Liberals do best under AV, winning 269 seats. At 79.6 per cent of seats on offer, that would be the biggest majority government in Canada's history. The Conservatives would be reduced significantly to just 57 seats, while the NDP would win 11 seats, a gain of five over FPTP due to a handful of Conservative-NDP races where Liberal second-choice votes would put them over the top.

It will be interesting to follow how these numbers will fluctuate until the electoral reform committee finalizes its work and presents a potential alternative to first-past-the-post by the end of the year.

In any of these systems, the Liberals do well because they are polling well. It would be a mistake, however, to assume that any advantage they may have today based on which electoral system is adopted would automatically carry through to 2019 and beyond.
Posted by Éric at 4:52:00 PM