While we've been inundated with polls in the United States, things have been quiet here north of the border. Only two federal polls, interviewing a total of 2,432 Canadians, have been conducted in the month of July. For that reason, I won't go into too much detail on the trend lines since there is a greater potential that normal sampling error will have been behind any movement in the numbers. 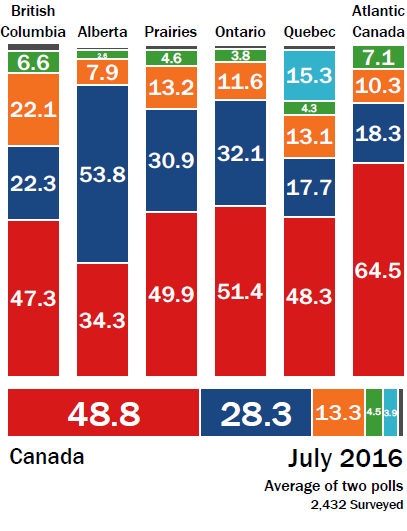 Nevertheless, the Liberals continued to lead in the polls in July with 48.8 per cent support, a gain of 2.9 points over their average in June.

The Greens averaged 4.5 per cent in July, down 1.4 points, and the Bloc Québécois was down 0.5 points to 3.9 per cent. Another 1.4 per cent said they would vote for other parties or independents. 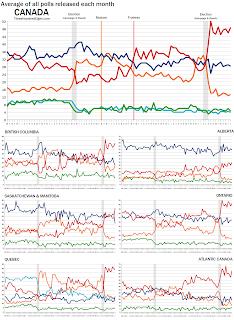 The Liberals led in British Columbia with 47.3 per cent, followed by the Conservatives at 22.3 per cent. That was the lowest score the Tories have put up in B.C. since before 2009, when the monthly averages were first calculated. The New Democrats increased their support for the fourth consecutive month, jumping to 22.1 per cent, their best score since the election. The Greens were at 6.6 per cent, their lowest since November 2012.

In Alberta, the Conservatives led with 53.8 per cent, while the Liberals had their best support on record at 34.3 per cent. The New Democrats followed with 7.9 per cent and the Greens with 2.6 per cent.

The numbers in Saskatchewan and Manitoba look anomalous this month, as the Liberals soared to 49.9 per cent, by far their best performance since well before 2009. The Conservatives correspondingly fell to their lowest level at 30.9 per cent. These are likely outlier results, but it will be interesting to see if the Liberals continue to score anywhere near these levels in August. The NDP was at 13.2 per cent and the Greens at 4.6 per cent.

In Quebec, the Liberals were ahead with 48.3 per cent, while the Conservatives jumped to their highest since July 2015 with 17.7 per cent. The Bloc was at 15.3 per cent. The NDP dropped for the fourth consecutive month to their lowest level of support since October 2010 at 13.1 per cent. The Greens averaged 4.3 per cent. 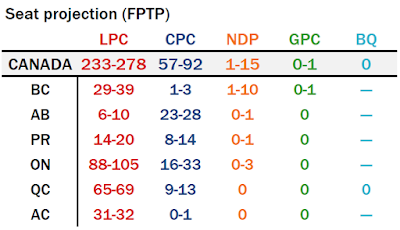 With these levels of support, the Liberals would likely win between 233 and 278 seats in our current first-past-the-post (FPTP) system. That's up 15 to 19 seats from June.

The Conservatives would win 57 to 92 seats, down 16 to 19 seats, while the NDP would win between one and 15 seats. Its floor has dropped by one seat but its ceiling is up three.

The Greens would win up to one seat (down one), while the Bloc would be shutout (down one as well). 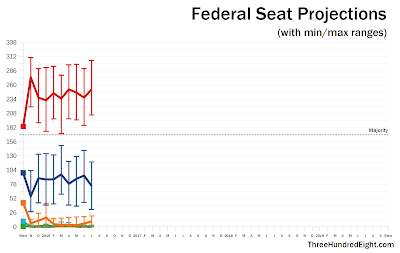 At the maximum ranges, the Liberals are at their highest seat potential since just after the election. The Conservatives remain solidly in second place, as the New Democrats flirt with the bottom along with the Greens and the Bloc Québécois.

As explained last month, it is also a good idea to take a look at how these numbers would breakdown with either a form of proportional representation (PR) or an alternative ballot (AV).

I went through my (simple) methodology for calculating these estimates last month as well. 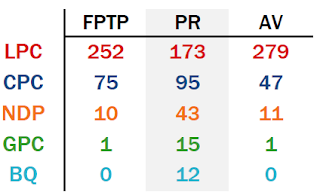 Once again, all of the opposition parties would be the main beneficiaries of a move to PR, while the Liberals would benefit the most from the adoption of AV.

This assumes all else is equal, with no change in voting behaviour, party strategy, or the list of parties due to the adoption of a new electoral system.

Still, with their current levels of support the Liberals (at 173 seats) would be able to win a majority even under PR because of how the provincial seat breakdown works out.

The Conservatives would win three fewer seats than they currently hold, while the New Democrats, with 43 seats, would have about as many seats as they currently have, despite their drop in national support.

The Greens and Bloc, at 15 and 12 seats, respectively, would achieve official party status in the House.

With AV, the Liberals would win the biggest majority government in Canadian history with these numbers with 279 seats to 47 for the Conservatives, 11 for the NDP, and one for the Greens. Again, however, this assumes nothing else changes.
Posted by Éric at 11:10:00 AM