Four polls surveying a total of 5,930 Canadians were conducted during the month of November, suggesting a widening gap between the ruling Conservatives and the opposition New Democrats and Liberals. The news might be worse for the NDP, however, as they are now back to where they were in March when Thomas Mulcair won the party's leadership race. 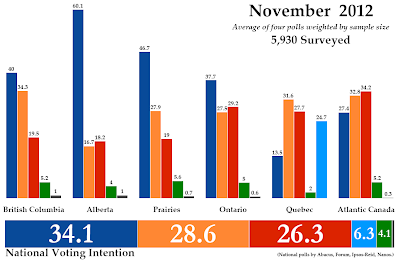 The Conservatives averaged 34.1% during the month of November, up 2.1 points since October. The New Democrats were down 1.6 points to an average of 28.6%, their lowest result since March and their fifth consecutive month of stagnation or decrease.

The Liberals were down two points to 26.3% in November, but it was the second consecutive month in which the Liberals managed a better score than anything registered since the May 2011 general election.

But it is problematic to compare November's results to October's. Only two polls were in the field nationwide that month. Instead, a better picture can be obtained by looking at how the polls have moved since the four firms that were active in November were last in the field at around the same time.

That brings us back to May 26 through to June 23, when Nanos, Forum, Ipsos-Reid, and Abacus all conducted polls.

The average of the polls from these four firms in May-June gave the NDP 35.9%, the Conservatives 33.4%, and the Liberals 21.2%. A similarly unweighted average of the polls in November gives the Conservatives 34.2%, an increase of 0.8 points, the NDP 28.6%, a drop of 7.3 points, and the Liberals 26.3%, an increase of 5.1 points. This time period is useful as May-June was the height of the Mulcair honeymoon. It is clear from how these polls have moved that the NDP has bled support to the Liberals since that time.

The Conservatives led in British Columbia with an average of 40% support, their best result since October 2011. The party is up 8.8 points since October 2012, but a quick look at the chart to the left shows how the month was likely an outlier. The NDP placed second with 34.3%, while the Liberals were at 19.5% and the Greens at 5.2%. That is the lowest result for the Greens on record, stretching back to January 2009.

The Conservatives were ahead in the Prairies with 46.7%, their highest result since January 2012, while at 27.9% the NDP was at their lowest since September 2011. The Liberals were up for the third consecutive month, hitting 19%. The Greens were up to 5.6%.

The Conservatives had 37.7% support in Ontario and were trailed by the Liberals at 29.2%. The NDP managed 27.5%, but with the exception of a blip in July and August the party has been on a steady decline since May. The Greens averaged 5% in the province.

The New Democrats have been sliding in Quebec since June, and at 31.6% registered their lowest average support since March. The Liberals were up to 27.7% in Quebec, their best showing since September 2009. They have been steadily increasing since June, taking their support from the NDP. The Bloc Québécois averaged 24.7%, while the Conservatives managed 13.5%. The Tories have been relatively steady at this low level of support since March. The Greens averaged 2% in Quebec.

And in Atlantic Canada, the Liberals were at 34.2% and have been holding at their highest level of support since April 2011 over the last two months. The NDP averaged 32.8%, their worst since March 2011, while the Conservatives were in third at 27.4%. The Greens averaged 5.2% support.

With these numbers, the Conservatives would win 149 seats on the proposed boundaries of the 338-seat House (though not taking into account the final reports for some of the provinces released at the end of November). That is a gain of 21 seats over their October projection.

The major gains for the Tories occurred in British Columbia (+10 from October) and Ontario (+7), while the major losses for the NDP took place in Ontario (-16) and the Prairies (-7). The Liberals dropped eight seats in B.C. and seven in Ontario, but picked up six in Quebec in the projection.

November was a bit of a troubling month for the New Democrats. Though they were still in second nationwide and were leading in Quebec, the trends are not heading in the right direction in Ontario, Quebec, and Atlantic Canada. The Liberals are eating into their support in Quebec (where, it should be repeated, the party put up its best numbers in three years) and are making it more difficult for the NDP to make inroads in Ontario.

The Liberal leadership race is likely one of the main contributing reasons for the party's uptick in support, particularly in Quebec. But the Léger poll released over the weekend should be cause for concern. Though Justin Trudeau still put up impressive numbers, tying the Conservatives at 31% if he led the Liberal Party, that is very different from the wide lead that has been given to him in other polls. This could be a methodological issue, but it might also be an indication that the shine is starting to wear off.

That does not leave the Conservatives out of the woods. They are still down six points from where they were on election night, and have suffered big losses in Atlantic Canada and are poised to lose a lot of seats in British Columbia and Ontario. Though the party appears to have hit a bit of a floor, their trend line is still rather negative since May 2011 and they are far from being in majority territory. Nevertheless, they are still in the most enviable position of the three major parties.
Posted by Éric at 9:07:00 AM