It was a much quieter month on the polling front, with only four national and regional polls being released throughout November, down from 14 in October. The polls that were out showed general stability, if not an uptick in Liberal support. But due to the lower sample size, I am just going to briefly go over the averages in November for the sake of continuity.

Kickstarter Update: We're now at 58% funding at the 50% mark of the pledge drive - 15 days to go! The project currently has 123 backers. Thanks so much! Let's keep spreading the word. 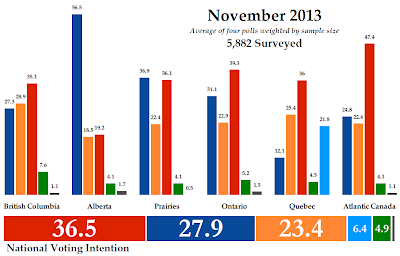 The Liberals averaged 36.5% support in November, up 1.3 points from their October average. The Conservatives were down one point to 27.9%, their lowest since May and their second worst result since at least before 2009.

If we compare the national polls that were in the field in November to the last time these firms were last active, we see that the apples-to-apples comparison is even more favourable to the Liberals.

There were a few notable regional results, however. The Liberals scored their best-ever (at least since January 2009) results in British Columbia and the Prairies, while the Conservatives managed their worst results since before then in Ontario. On the other hand, they had their best score in Alberta since February 2013, while the Liberals were at their lowest point since then. The NDP had their best result in Alberta since October 2012, but dropped in support for the third consecutive month in Quebec.

With these numbers, the Liberals would likely win 142 seats on the new 338-seat electoral map, with 117 going to the Conservatives and 68 to the New Democrats. The Bloc would win 10 and the Greens would keep their one seat.

This is a gain of 12 seats for the Liberals since last month. The Bloc dropped five, the Conservatives dropped four, the NDP dropped two, and the Greens dropped one.

The most important changes took place in Ontario and Quebec. The Liberals and Conservatives swapped seven seats compared to the October projection, while the Liberals picked up nine in Quebec. Four of them came from the NDP and five from the Bloc.

So, another month of the Liberal lead since Justin Trudeau became leader. It now stretches to eight months, equal to the amount of time the Conservatives led in the polls after the NDP relinquished the lead in 2012. This Liberal lead is the longest the party has enjoyed since before the January 2006 election, and by far the most significant in size since then. This just may be the new normal for the time being.
Posted by Éric at 11:04:00 AM