The number of polls released each month drops dramatically during the summer, down to two or three polls per month in 2012 and 2013. June usually sees a rush of polling before the summer break, however. Last year, six polls were released in June. In 2012, that number was eight. In 2014, the total number of national polls released was just two. That makes the monthly averages for June a bit of an anomaly, as they are based on only two data points outside of Quebec (two Quebec-only polls were also released). So, we should exercise caution when looking at these results. You've been warned.

The total sample size for the month of June is relatively large, however, at just under 10,000 Canadians thanks to the mega-poll conducted by Angus Reid Global, which alone sampled over 6,000 people. But the only two pollsters in the field, the other being Forum Research, showed very different results, with Forum giving the Liberals an eight-point lead and Angus Reid judging the Conservatives to hold a one-point advantage.

This inconsistency has been, well, consistent. In May, Forum gave the Liberals a six-point lead when Angus Reid still gave it to the Tories by one point. In April, it was a nine-point edge for the Liberals from Forum and a two-point advantage for the Conservatives from Angus Reid. What this means, then, is that these two pollsters have been showing the same general things for the last few months, regardless of how that compares to the findings of other pollsters. 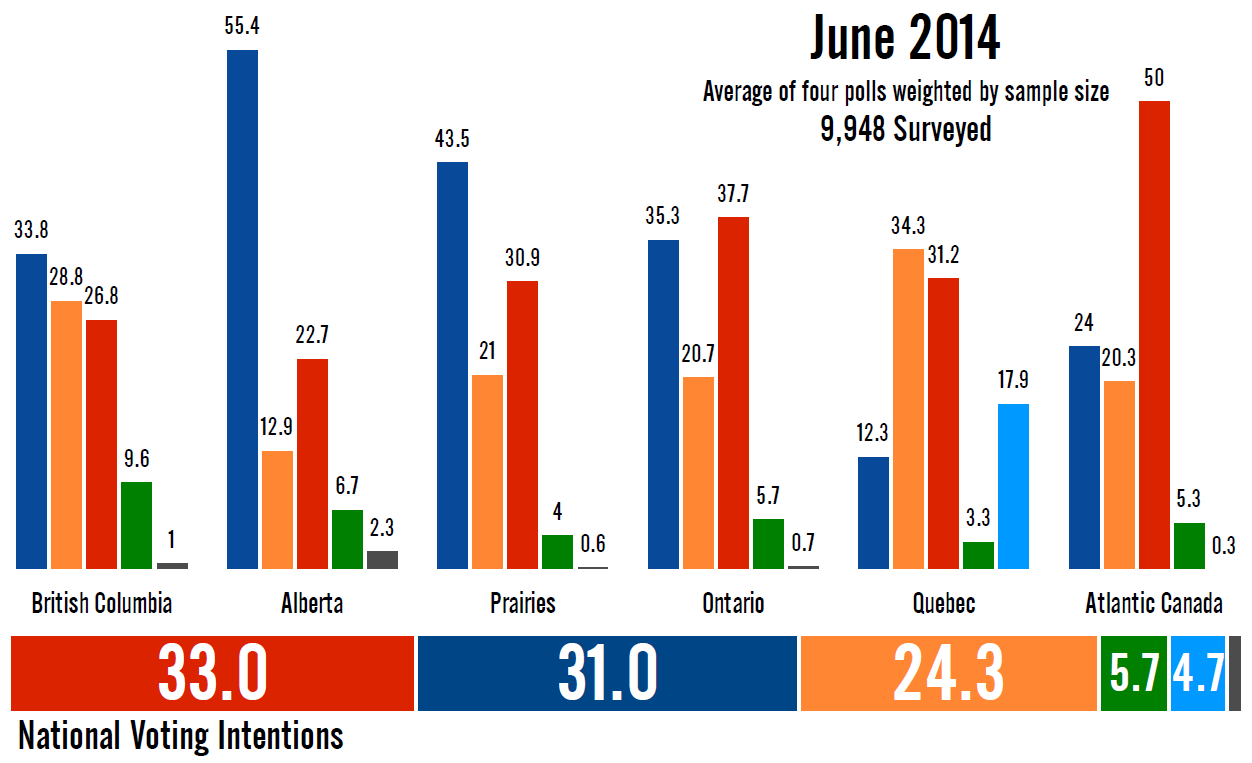 The Bloc Québécois was down 0.7 points to 4.7% and 1.3% of Canadians said they would vote for another party.

The Liberals have now led in the polls for the last 15 months, though the Conservatives do seem to be experiencing some wobbly improvement. 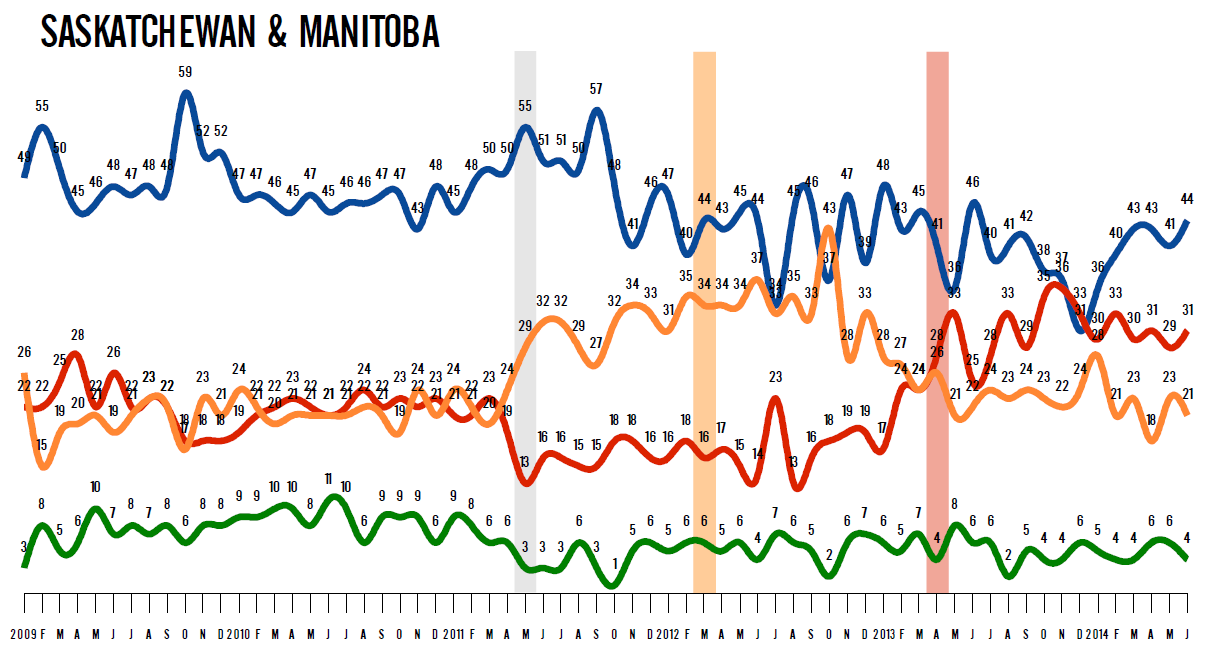 The Conservatives have experienced a bit of a rebound in the Prairies in the last few months. Support was oscillating back and forth before Trudeau came along, but after that point the Tories were on a general slide, cratering at the end of 2013 and actually briefly relinquishing the lead to the Liberals. Since then, though, the party has returned to the low-40s where it has stood for most of the post-election period.

The New Democrats captured their first outright lead in Quebec in June, the first time they had done so since Trudeau took over the Liberals. The NDP was up 4.3 points to 34.3%, their best number since October 2012. The Liberals were up 1.3 points to 31.2%, but the last two months have been the worst for the party under Trudeau (though that still ranks above the performance of the Liberals from mid-2009 until the beginning of 2013).

The Bloc Québécois was down 3.2 points to 17.9%, their worst since August 2013. The result at that point, and their average in June, marks their lowest support levels since October 2011. Mario Beaulieu is experiencing the opposite of a honeymoon. The Conservatives were down 1.9 points to 12.3%, while the Greens were up 0.3 points to 3.3%.

Note, since both Léger and CROP reported in June, the average is more robust for Quebec than it is elsewhere. Also, I had missed recording a CROP poll from May, so the monthly average has been retroactively adjusted. It is reflected in the tracking chart above.

Last month, a 4.7-point national lead for the Liberals translated into a tie in the seat count with the Conservatives. This month, the two-point lead translates into a 13-seat deficit.

The Conservatives would win around 129 seats at these levels of support, up one seat from the May projection. The Liberals fell 12 seats to 116, while the NDP was up 18 seats to 90. The Greens were unchanged at two, while the Bloc fell from eight seats to just one.

The Conservatives gained one seat apiece in British Columbia, Alberta, and the Prairies, and picked up two in Atlantic Canada. They dropped four in Quebec, however.

The Liberals were down one seat in Ontario and Alberta each, two in both Quebec and Atlantic Canada, and six in British Columbia.

The NDP was up 13 seats in Quebec, five in British Columbia, and one in Ontario, but was down one on the Prairies.

Overall, then, it would seem to be a rather poor month for the Liberals. But is that fair? A completely unweighted average of the Forum and Angus Reid polls from May and June would reveal a 1.5-point gain for the Liberals, rather than a loss. But the party has been losing steam in British Columbia for the last few months, and the NDP does seem to be making inroads in Quebec again (primarily at the expense of the Bloc Québécois). The Conservatives are slowly returning from the doldrums of the high-20s, but are still very far from a re-elected majority government. Will the summer see any of this change, or will the numbers solidify as people turn their attentions elsewhere?
Posted by Éric at 2:05:00 PM