The polling from Forum Research has dominated the Toronto mayoralty race, with the last non-Forum poll (by Ipsos Reid) dating from November 2013. In those polls by Forum, Olivia Chow has consistently led by a comfortable margin, with John Tory mostly placing second since the latest Rob Ford fiasco. But a new poll by Nanos Research turns that on its head: Ford is still out of the running, but Tory is given the lead, with Chow running in second.

What's going on? It is difficult to say on first glance that the Nanos poll is an outlier, as we have only heard from Forum. That all the polls from Forum have been showing something similar does not, alone, discount Nanos's findings. We'd need to have multiple pollsters agreeing with Forum before we could say that Nanos is out of step. For all we know, Nanos could continue polling every month, just like Forum, and show the same consistency in its results. We need a third opinion before reaching any conclusions. 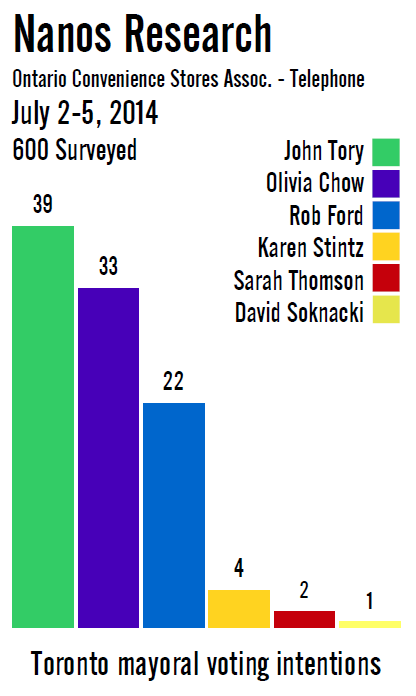 This Nanos poll was commissioned by the Ontario Convenience Stores Association, though published directly by Nanos. According to the Nanos report, "the vote and issue module was asked first in the survey followed by some proprietary questions related to convenience stores." This should ensure that the sample was unbiased by the sponsor.

The poll found that 39% of decided and leaning voters supported Tory, followed by Chow at 33% and Ford at just 22%. Karen Stintz had 4% support, with Sarah Thomson at 2% and David Soknacki at just 1%. About 11% of respondents were undecided and not leaning towards one candidate.

This is quite different from the portrait Forum has been painting. In recent polls, Chow has ranged between 35% and 40%, with Tory between 25% and 29%. The Ford numbers are a little lower than most of Forum's recent polls, but not out of the ordinary. Soknacki's 1% is also on the low side.

If we take into account the margin of error from Nanos's survey of decided and leaning voters (about +/- 4%), Tory could be as low as about 35% and Chow as high as 37%. That puts Chow in the ballpark of the Forum polls but Tory is still quite high. Forum was last in the field on July 2 and had Chow at 38% among decided voters, with Tory at 28%. Could there have been dramatic movement on July 3-5 or is there a methodological issue causing the difference?

We can probably assume that methodology is the main factor here. Forum conducts its polls via interactive voice response (robo-dialing) and over a very short time period (usually a few hours), which rules out the possibility of call-backs. This is when a pollster tries to get in touch with a randomly-dialed number when the respondent at first doesn't pick up. This lessens the error that could creep in from only sampling a subset of the population at home on a certain day of the week.

Nanos, on the other hand, conducted this poll with live-interviewers and dialed both cell phones and landlines (Forum does not make clear whether it does so) over a few days, which allows it to carry out call-backs (Nanos points out that it conducted a maximum of five call-backs). The differences in the sampling methods may thus be behind the variation between the polls.

It isn't the first case of divergent views from Nanos and Forum. In their gauging of the Ontario provincial scene, both firms could rarely come to any agreement. In January, Nanos gave the Liberals an eight-point edge over the Tories. In the same month, Forum gave the PCs the lead by three points. A disagreement on who led in Ontario occurred again in February, and again in April, as well as on numerous occasions in 2013. So to see Nanos and Forum at odds here is nothing new. Nanos did not poll late enough in the Ontario provincial campaign for us to measure its performance versus Forum, however.

(Note, there has been some chatter on Twitter about the reliability of this poll, since it was commissioned by a lobby group that has some past links to Tory. The people casting aspersions on the poll have every political incentive to do so, considering they are supporters of the Chow campaign. What they are implying is that the poll has been manipulated in Tory's favour to please the OCSA, but the logical extension of that smear is that Nanos Research manipulated its own poll. No one is saying that directly because they have no proof and to suggest such a thing would be libelous. It is also implausible. Nanos's success in business banks on being reliable and objective, and it is ridiculous to believe that the company would purposefully manipulate a poll and then release it publicly, data tables and all. The poll was not even published by the OCSA, which would raise some flags, but directly by Nanos, something that the polling firm would have absolutely no reason to do if the numbers were manipulated to please a client. It might be too much to expect from some political operatives, but they should exercise a little caution before they accuse individuals of being lying shills.)

The poll did some have other interesting tidbits. Like all its polling, Nanos asks respondents to list their first two choices. Combining them gives us an indication of each candidate's potential ceiling. Tory's is the highest (his approval rating has been the highest in Forum's polling as well) at 57%, with Chow not far behind at 46%. After that, no one has a real chance of pulling out a victory. Ford's ceiling tops out at just 27%, Stintz's at 17%, Soknacki's at 10%, and Thomson's at 4%.

Nanos also asked respondents to name their top issue - unprompted. This means survey takers had to come up with an issue themselves, rather than choose from a list. By far, transit was the top issue at 35%, followed by property taxes at 17%, jobs and the economy at 16%, and traffic at 14%. The embarrassment of Ford took only 4%, but that is not too surprising. Ford's antics might be a reason someone won't vote for him, but that doesn't change the election being about a more important issue that is relevant to a voter's daily life.

In terms of whether it is Tory or Chow who is leading, we're better off to wait and see what other polls are going to say about this race before determining who is off the mark (both could be, of course!). It will also be interesting to see if Nanos will continue polling, and if so, what its results will be. For now, we can just say that the race remains primarily between Tory and Chow.
Posted by Éric at 10:16:00 AM