Party support by age and gender

The polls currently suggest that the Liberals enjoy a small lead over the Conservatives nationwide, with the New Democrats running in third place. But when the Canadian population is broken down by age and gender, a different story can be told - including how the political mood has shifted since 2011.

During the Kickstarter campaign at the end of 2013, one of the backer rewards was the option to choose a topic of analysis I would look at here. The first request I received, from Keith Neuman of the Environics Institute, was to take a look at federal support broken down by demographics. This is that analysis.


Before getting to it, a few words about the project behind this analysis. Tapping into the Pulse: Political public opinion polling in Canada, 2013 was published as an ebook earlier this year, and is a retrospective look at politics and polling in 2013. The ebook is listed at $4.99, and can be downloaded directly from Gumroad, Amazon (for your Kindle) and Kobo (for your Kobo eReader).

To give this exercise some context, it would be useful to know how Canadians voted in 2011 by their demographic profile. There are ways to estimate this, such as exit polling or post-election polling, but it is impossible to know with certainty how exactly Canadian demographic groups voted in the last election.

Using these three polls, and adjusting for the discrepancy between the election results and the polling numbers, we can get a good idea of how Canadians voted in the last election according to their age and gender.

Not all pollsters release full demographic information, and few use the same age brackets. So to compare voting intentions today to the last election, I've again focused on three polls from Abacus Data (in order to get a large enough sample with which to work). These polls were conducted between January and July 2014. That is a long period of time, but the numbers in Abacus's polling were consistent and, overall, there has been little movement in the polls in 2014.

Now that we have these baselines, let's look at the demographic breakdowns. 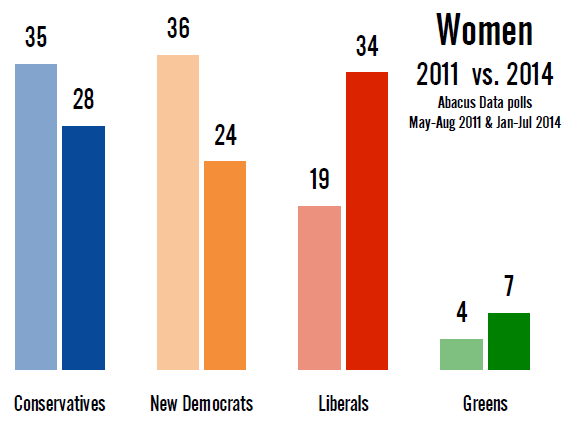 Though the Conservatives won 40% of the vote overall, beating the NDP by nine points in 2011, the New Democrats might have taken more of the female vote than did the Tories, at 36% to 35%. The Liberals captured just 19%, with 4% of it going to the Greens.

The Liberals have made huge inroads among women, up 15 points. This came from both the NDP (12 points) and the Conservatives (7 points). 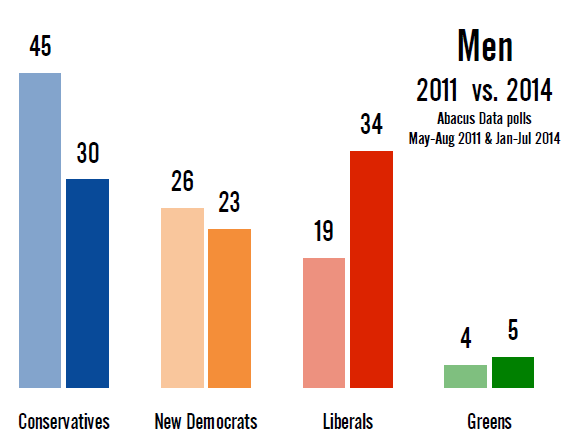 Interestingly, men and women's support is now rather uniform. The Liberals have 34% support among men, with 30% supporting the Conservatives and 23% the NDP. But in 2011, the Conservatives had an enormous advantage among male voters, with 45% support to just 26% for the NDP and 19% for the Liberals.

The Liberals have again picked up 15 points here, but most of that came from the Conservatives, who are down 15 points. The NDP has slipped three points.

Looking at the numbers this way gives us an indication of where support is coming from for the Liberals. They have improved their position equally among both men and women, but that female vote came from the NDP and the male vote came from the Conservatives. The effect has been to level the playing field, with each party garnering roughly half of their supporters from each gender. An interesting shift. 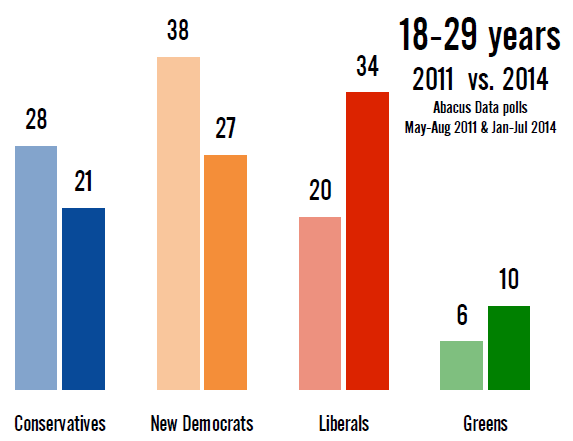 It should come as no surprise that the NDP won the youngest cohort of voters in 2011, with 38% support against 28% for the Conservatives and 20% for the Liberals. Today, however, the Liberals lead in this group with 34%, up 14 points. The NDP has dropped 11 points to 27% while the Conservatives have fallen seven points to 21%. The Greens are up four points to 10% among 18- to 29-year-old Canadians. 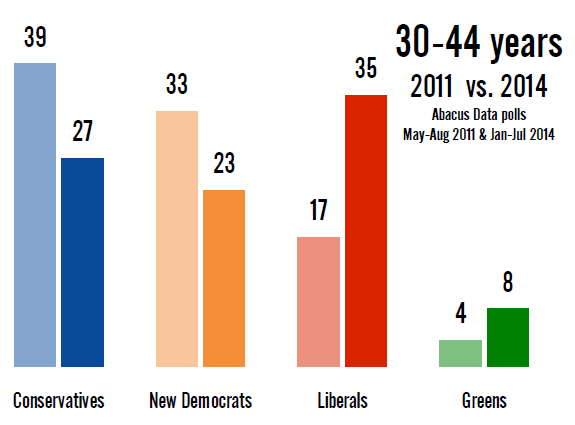 The Conservatives have suffered most among this group, dropping 12 points. The NDP has also fallen, by 10 points, while the Liberals have picked up 18 points - more than doubling their support among these voters.

This is a target group for all parties, considering the preponderance of family-friendly language used and family-focused policies proposed. It would appear that the Conservatives did a good job attracting these voters in 2011, but the Liberals are now managing it best. 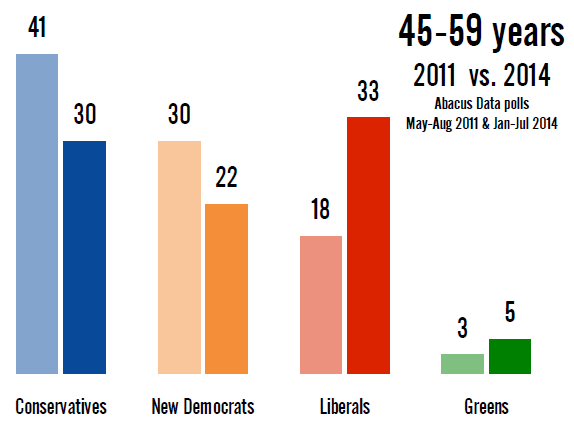 The next group, who may be nearing retirement and have children heading to university, voted solidly Conservative in 2011: 41% to 30% for the NDP and 18% for the Liberals. 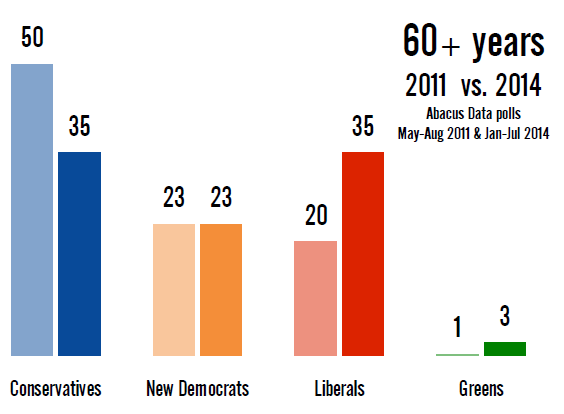 Finally, there is the oldest cohort of Canadians, an important demographic as they can be most counted upon to cast a ballot. They overwhelmingly supported the Conservatives in 2011, with 50% backing the party. The NDP took just 23% of the vote among this group, while the Liberals took 20%.

The NDP has held firm at 23%, but the Liberals have gained 15 points to move into a tie with the Conservatives, down 15 points, at 35%. If the Tories cannot win this voting block, they will not win the election.

When we break it down by age, we can see where the parties have suffered losses. The Conservatives have generally lost in uniform proportions, though perhaps took a bit more of a hit among older Canadians. The New Democrats have lost primarily younger voters, who have gone over to the Liberals, while older Canadians who backed the New Democrats in 2011 are mostly sticking with the party. The Liberals have generally gained in similar proportions across all demographic groups, but may have gotten their biggest uptick among Canadians who, coincidentally or not, are about the same age as Justin Trudeau.

All of this is relatively intuitive. The Conservatives are traditionally the party of older male voters, while the NDP would be expected to be the party of younger, primarily female Canadians. The Liberals enjoy uniform support levels among both genders and all age demographics, which seems to align with the broad appeal the party is seeking and is best placed to capture as the party in the centre. The Liberals remain in the best position one year before the next election. These numbers make it clear which demographic groups the NDP and Conservatives need to re-capture if they hope to win in 2015.
Posted by Éric at 10:47:00 AM