In the end, the by-elections on Monday went just about as expected, with the Liberals picking up Trinity-Spadina and making impressive gains in rural and northern Alberta. The turnout was low - in two cases setting new records - but the results were nevertheless in line with what the national and regional polls suggested should be the case.

Let's go through the by-election results, riding by riding. The following charts show the change in vote share and actual votes compared to the 2011 federal election.

Amazingly, the race in northern Alberta was the closest of the four.

The Conservative David Yurdiga prevailed in the end, with 47% support against 35% for Kyle Harrietha of the Liberals (the party's best performance since 1968). The New Democrats took 11% of the vote, while the Greens took 4%.

The changes were less significant in Macleod, where turnout was also quite low. John Barlow of the Conservatives took 69% of the vote against 17% for the Liberals' Dustin Fuller (the best performance for the party since 1957). The Greens placed third here with 6% support, and the NDP finished fourth with 4%.

The Conservatives dropped a more modest 8.7 points, but the Liberals picked up 13.3. Much of that came from the Conservatives, but also from the NDP, which was down 6.1 points.

The Liberals did not suffer from the departure of Jim Karygiannis in Scarborough-Agincourt. Instead, their vote share under Arnold Chan increased by 13.9 points to 59%, while the Conservatives' Trevor Ellis dropped 4.9 points to 29%. The NDP fell even more dramatically, by 9.6 points to 9%. The Greens took 1% of the vote (and actually placed fifth, behind an independent candidate).

The marquee match-up of the evening went very comfortably to the Liberals, as Adam Vaughan won 54% of the vote in Trinity-Spadina, an increase of 30.3 points over the party's 2011 performance and the best the party has done since the riding was created in 1988. Joe Cressy of the NDP took 34% of the vote, down 20.4 points from Olivia Chow's performance. The Conservatives fell 11 points to 6%, while the Greens were up slightly to 5%.

Overall, it was a stellar performance for the Liberals across the board. They averaged 20.7% support across these four ridings in 2011, but on Monday night they averaged 41.3%.

For the Liberals, this was their best performance since before 1988. The closest they have come since then was an average of 38.8% in 2000.

This was the Conservatives' worst performance since before 1988, if we combine the vote totals of the Progressive Conservatives and Canadian Alliance/Reform between 1988 and 2000. Their previous low in that span was 2004, when the Conservatives took an average of 41.2% support in these four ridings.

For the New Democrats, this was their worst performance in these four ridings since 2000, when they averaged 12.8% support.

Considering how last night's results stand against historical performances over the last 26 years, the numbers are remarkable. So perhaps they are a fluke?

I don't think that argument can be easily made. Before the by-elections, I posted what the high and low ranges were when applying this site's projection model to the ridings using the last 30 days of Alberta and Ontario polling. At the time, I hadn't included the latest Angus Reid survey. But the chart below includes that survey, and shows that the results fell well into line with what the province-wide polls suggested could be the case. 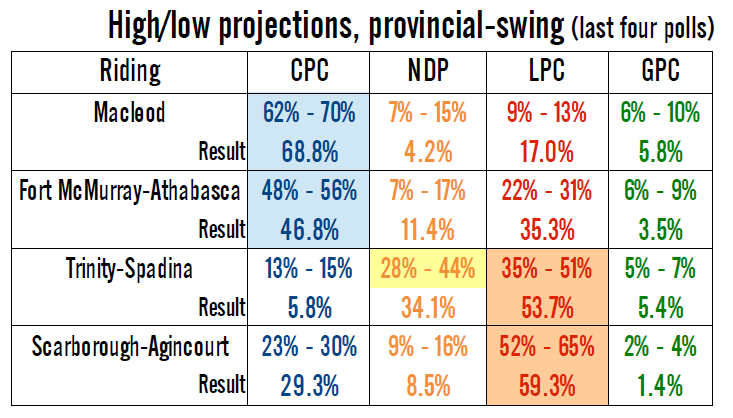 As you can see, the bulk of the results fell just outside or well within the expected ranges.

In Macleod, the Conservatives performed within expectations, while the Liberals over-achieved a fair bit and the NDP and Greens under-achieved.

In Fort McMurray-Athabasca, the Conservative result was just below where the polls suggested it could fall, and Harrietha's was just above the high-end. Perhaps in this we see the push the Liberals made in the final days and the multiple visits from Trudeau.

The Liberals just out-performed expectations in Trinity-Spadina, no doubt due to Vaughan's high-profile, while Cressy performed just about as expected. The Conservatives, not in the running, were well below expectations.

And in Scarborough-Agincourt, both the Liberals and Conservatives performed as expected, with the NDP and Greens falling just below their low range.

This seems to back-up the results, suggesting that they were not a fluke but generally representative of wider trends. It also suggests that the national polls are not off the mark, and that what they are recording is in the ballpark of how Canadians feel right now.

But other polls did not do so well. As usual, Forum conducted riding-level polls in each of these four ridings, despite the myriad of difficulties involved with doing so. One particular issue is the inability to geo-locate cellphones, leaving them entirely outside the sample. Here is how Forum's polls did: 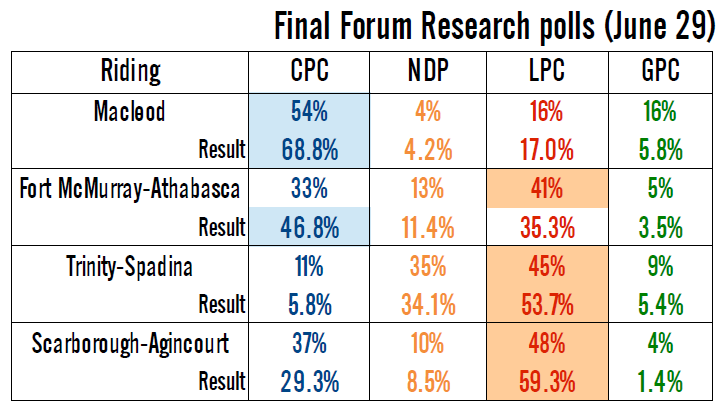 Overall, they did rather poorly. Even accounting for the +/- 5% margin of error that Forum reported, in only two cases (the Liberals in Macleod and the NDP in Trinity-Spadina) were the two leading parties in each riding gauged accurately.

Not a strong night for Forum. But there is some credit worth portioning out. Forum did record that the Liberals were doing well in Alberta, greatly above historical levels. And throughout the campaign Forum pegged Vaughan as a game-changing candidate. Its polls there made Trinity-Spadina a much easier call, even if they missed on some of the final numbers.

Polling by-elections is perilous, and Forum should probably stop doing it as it has not helped its reputation. But these by-election polls have been broadly informative, rather than precisely accurate. They told us much about Vaughan's influence in this round of by-elections, and the surprising Liberal gains to be made in Manitoba last fall. We just need to know how to read these by-election polls better, if they will continue to be published. Look at the broad strokes and the general narrative, forget the calls on who will win and by how much. If we do that, these polls may prove useful after all.
Posted by Éric at 12:31:00 PM